Is this squid with scales kosher?

A scientific paper in Nature in 1960 entitled "Lepidoteuthis grimaldiiŌĆöa Squid with Scales" describes a squid that was found in the contents of a whale and (at the time) was the fourth specimen of its kind. Even now specimens are hard to come by.

A more recent photo of a specimen can be found on the Lepidoteuthis grimaldii wikipedia page, and i copy it in here: 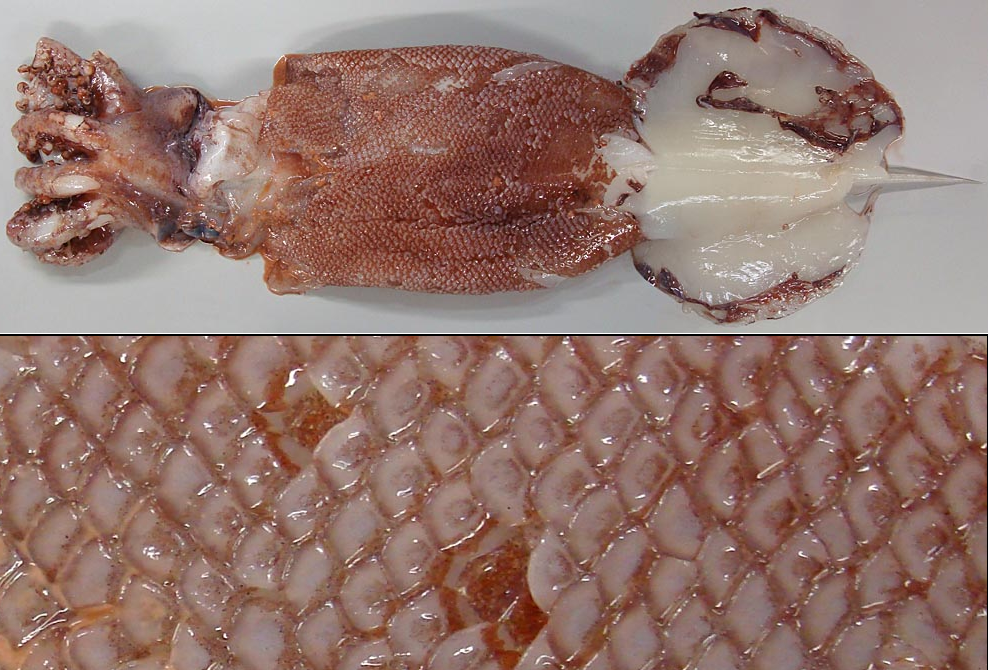 The upper part of the squid are fins that help propel the squid through the water. For those opinions who would permit non-fish species so long as they have fins and scales, what would qualify as 'fins'?

Would this species be halachically considered as having 'fins and scales'?

Nachmanides (Commentary on the Torah, Leviticus 11:9), basing himself on the Talmud, Tosefta and Targumin, explains that the qasqeseth required by the Torah refers to a scale that is separate/removable from the skin of the kosher sea creature:

The Ramo (YD 83) codifies this interpretation:

"And scale" - these are the peels fixed in it (the kosher sea creature). Gloss: Specifically those that are peelable by hand or with a utensil, but if it is impossible to peel them from the skin of the fish, it is not called scales (HM''M 1:41)

The Magid Mishna (Laws of Forbidden Foods 1:24:1) suggests that this requirement is also assumed by Maimonides.

In fact, according to the OU, the "RambanŌĆÖs requirement is discussed in the Achronim, but is universally accepted as the halacha."

Furthermore, according to the OU (id), the reason sharks are not considered kosher is because their scales are not easily removed from the skin without tearing the skin. Likewise, "American Eel (Anguilla Anguilla) is known to have scales that could be 'kosher' if not for the fact that they are deeply embedded into the skin."

A very cursory search of the internet does not seem to present much evidence that the superficially scale-like features of the Lepidoteuthis grimaldii correspond to the requirements of the rishonim and achronim for qasqeseth. For example, the "soft-scaled" squid is described more recently as having a "distinctive hexagonal shaped dermal cushion, formerly called 'scaled', that covers the mantle except for the posteroventral part under the posterior half of the fins."

Similarly, Wikipedia (at the time of writing) cites scientific sources describing the rare squid's "scales" more precisely as dermal cushions that do not sound like they would be any more likely to meet the requirements of qasqeseth than would the scales of sharks and eels:

The overlapping "scales" of Lepidoteuthis grimaldii are actually dermal cushions with a vacuolate internal structure that are continuous with a similarly vacuolate underlying layer of mantle tissue... Structurally very similar (though non-overlapping) dermal cushions are found in Pholidoteuthis adami. It has been proposed that these two species achieve buoyancy by means of the fluid stored in their vacuolate dermal cushions and upper mantle layer. Given their spongy form, these cushions may also play a secondary protective role.

In fact, I'm not clear why this particular squid's dermal cushion should be any more a candidate for qasqeseth than that of less rare species. I'm not personally aware of any source that requires the the scales overlap, which seems to be the seemingly non-halachic, distinctive feature of this particular squid. (Notably, the verse actually seems to require only one scale.) Ultimately, it seems that the Ramban's additional general guideline (id) that kosher aquatic life are found near the surface remains unchallenged by this deep sea-dwelling cephalopod.

(It seems worth noting as well that describing the fins of the Grimaldi "scaled" squid as snapir presupposes that tailfins qualify.)

Contrary to popular belief, the Torah does not say that a sea creature has to be a fish in order to be kosher. It only speaks of ŌĆ£anything that has fins and scales.ŌĆØ And, uniquely among cephalopods, the Grimaldi squid actually has fins and scales...

[W]hile some authorities are of the view that any scaled and finned aquatic creature is kosher, Rambam and others maintain that it must be a fish.

Not the answer you're looking for? Browse other questions tagged halacha kashrut-kosher non-kosher-species .

1
Why are shellfish not kosher?

3
Fins and Scales
9
The Torah's list of animals with one kosher sign
35
Would a mermaid be kosher?
8
Is shaving with this kosher?
11
Are dik-diks kosher animals?
1
Punishment for Eating Non-Kosher
2
Why Fins and Scales?
2
Ancient Jews eating only fish with fins and scales?