Is Exercise on Shabbos Allowed?

Is one allowed to do exercises on Shabbos?

Are any types allowed? Some examples of different types:

In all cases, assume that the user is doing such actions with intent to lose weight.

In the time of the Gemara (and perhaps now, although I'm not aware of it) people would take medicine, in order to sweat for health reasons. The Rabbi's therefore forbade any activity that would cause one to sweat (i.e. exercise) because they were worried that if they permitted exercise, it would lead to people grinding medicine in order to sweat.

However, there is an important distinction to be made. There are two types of these activities:

One should not, as a rule, perform physical exercises on Shabbat or Yom Tov, whether with or without the use of an instrument designed for strengthening muscles, such as a chest-expander. Likewise, one should not engage in occupational therapy.

He then makes exemptions for exercises required for one's health (and recommends to ask a Rav) or for simple, light exercises with one's hand.

R Ari Enkin here writes "Exercising or any other bodily exertion is generally forbidden on Shabbat" and further quotes the Mishna Brura 301.7

It seems there is a lack of clarity on the clear aproach to this question.

Let's begin with the Mishna. Shabbat 22:6, סכין וממשמשין בבני מעים אבל לא מתעלמין, you can administer oils to the body and spread it on the stomach area (for the healing purpose of pain in the abdominal area) but you cannot provide pressure.

This is understood by Rashi as to mean speading these oils with pressure.

This is understood by the Rambam in his perush mishnayos as using עמל on the body, and in Mishna Torah 21;28, he elaborated and rules, זֶה שֶׁדּוֹרְסִים עַל גּוּפוֹ בְּכֹחַ עַד שֶׁיִּיגַע וְיָזִיעַ Which means more of an exercise definition, of Trampaling (similiar to an animal that is דורס) for the purpose of healing to a point of sweat.

We see that, as long as there is no sweat then it is not an issur from the Mishna, that being said walking is permitted even if it does bring sweat (I will not bring a source becuase it is logical). But Jogging is not permitted as it bring sweat similiar to a later point in the mishna קורדימא which is place to go to sweat. Can a person exersise if it is clear that no sweat will come about. (which means sweat from the body, not a liquid, like if someone Jogs in the winter)?

Like Rashi that even a simple hard rub forsure not. Like the Rambam only if it brings to sweat, altough who is to know if a simple stretch might break a sweat. And we are not talking about drench either because the Mishna which the Ramban made his ruling was talking about rubbing the stomach which will lead to sweat, so even a small amount is assur.

This is two directions beside the abvious uvda dechol.

As a note: Let us not assume the only reason Refuah is prohibited is the grinding of spices. We don't know the full scope understanding of our Rabbis.

The three main categories of Exercise is Cardio, Stretch and Muscle training. You can't accomplish Cardio and Muscle training without sweat (see earlier for definition) and Stretch is mentioned clearly by Rabbienu Chananel although with the result of sweat.

I would say from the Rambam and Rabienu Chananel of above that ikkar din, stretch with no possibility of sweat (as you can't do an action if its a ספק issur) would be permitted as long as it is not similar to the way you do it on the weekday as the Gemarah on 147b states clearly סכין וממשמשין בבני מעיים בשבת ובלבד שלא יעשה כדרך שהוא עושה בחול.

Chacham Ben Tzion Abba Shaul 2:page.258:12 held that working out to break a sweat is prohibited . However ,if one wants to work out without the intention of sweating then it is permmited. He also permits one to run if one doesn't have in mind to sweat. I don't beleive this is an accepted opinion by many,but he rules based off the Shulchan Aruch 328:42. 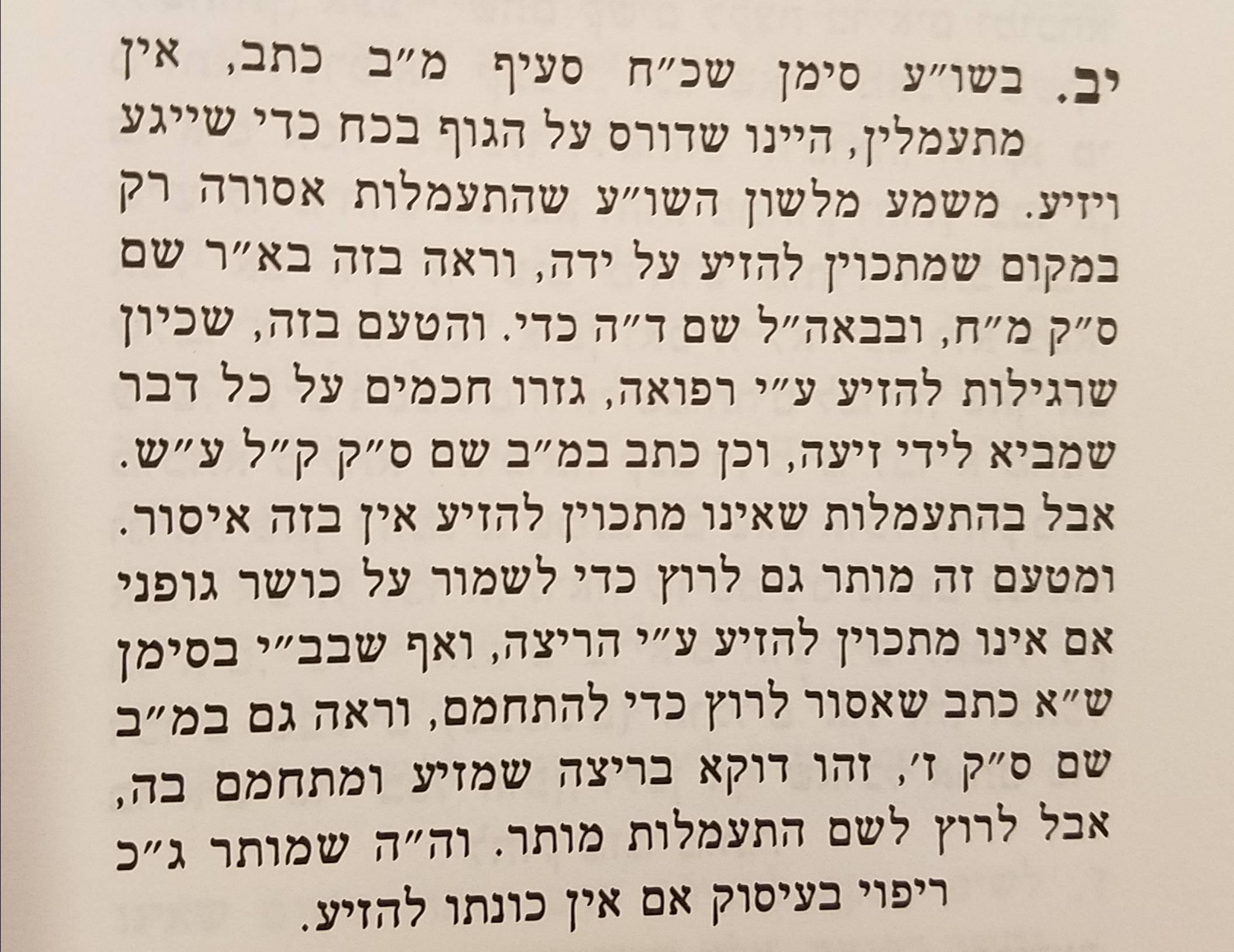 1
Can You Run On Shabbos?
5
Is scaring someone allowed?
4
Can one cross-country ski to shul on Shabbat?
0
May one do exercise on Purim?

23
Can you bowl on shabbos?
3
Jewish approach to exercise and incorporating it into our daily lives
9
May we violate Shabbos to administer morphine?
10
Can we violate Shabbos to inject a vaccine?
13
Exercise before Shacharis
0
May one do exercise on Purim?
2
Are you allowed to play basketball on Shabbos? Can a boy under 13?
2
Exercise-friendly head covering