Why is the second kaf hard in שעשה לי כל צרכי?

In the daily berakhah for having shoes, שעשה לי כל צרכי, why is the letter kaf pointed with a dagesh kal? I.e., why is the word pronounced tzorki rather than tzorkhi? My sense is that similar forms of the word are pronounced with a soft khaf, e.g., צרכי ציבור.

So, for instance, in the word כָּתְבוּ the kametz under the kaf is a kametz gadol, a long vowel, so the sheva under the thav is a sheva na (moving sheva), and the bhet is fricative. This is the usual case, which you would expect.

Certain times, the kametz is the kametz katon. For example, in chochma, or ozni. Many cases we know it to be a kametz katon on the basis of the full form, which has a cholam. In such cases of a short vowel, the syllable needs to be closed, and so the sheva is a sheva nach, and so the bgdkft letter afterwards has a dagesh.

This does not answer your question about tzorchei tzibbur. Assuming the spelling is indeed with a kametz katon vs. a cholam, I would suppose that this is a result of the weirdness of sheva merachef, which is inconsistent. (See here, about birkat vs. birchat, after the short vowel of chirik chaser.)

The word is "tzarki" rather than "tzarchi" because the kaf begins a syllable. And the rule is that the "beged kefes" letters (beis, gimmel, dalet, kaf, pey and sav) have a dagesh when they begin a syllable. It seems to me that this rule is widely known, but in my 15 minute search in a beis medrash, I could find no great source. Here's what I did find. (1) ArtScroll's publication of Rashi's commentary on the Chumash, at Numbers 7:89, footnote 10. The author of that footnote gave no source. (2) A Wikipedia article to be found here: https://en.wikipedia.org/wiki/Dagesh

When I got home I looked in the books I've got there. A Grammar For Biblical Hebrew by C.L. Seow contains the following pages 4 to 5. My understanding of his analysis is that in the word Tzarki, the Kaf is medial and preceded by a consonant (that is, a Reish with a Sheva). Therefore, following rule 4.b.iii, the Kaf is a stop; and then following rule 5, it takes a Dagesh. 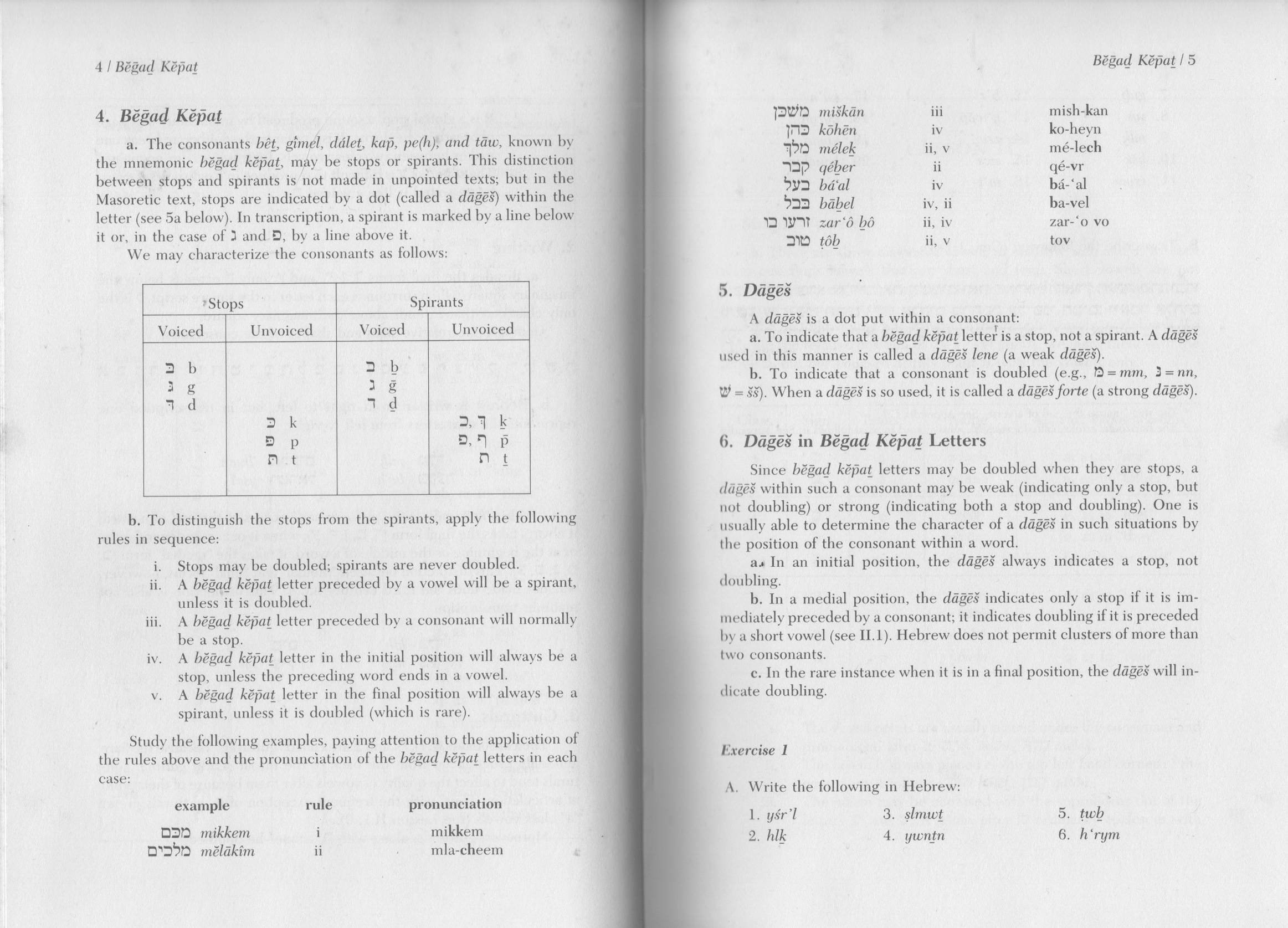 Introduction to Hebrew by Moshe Greenberg contains the page 13 attached. It comes out pretty much the same. 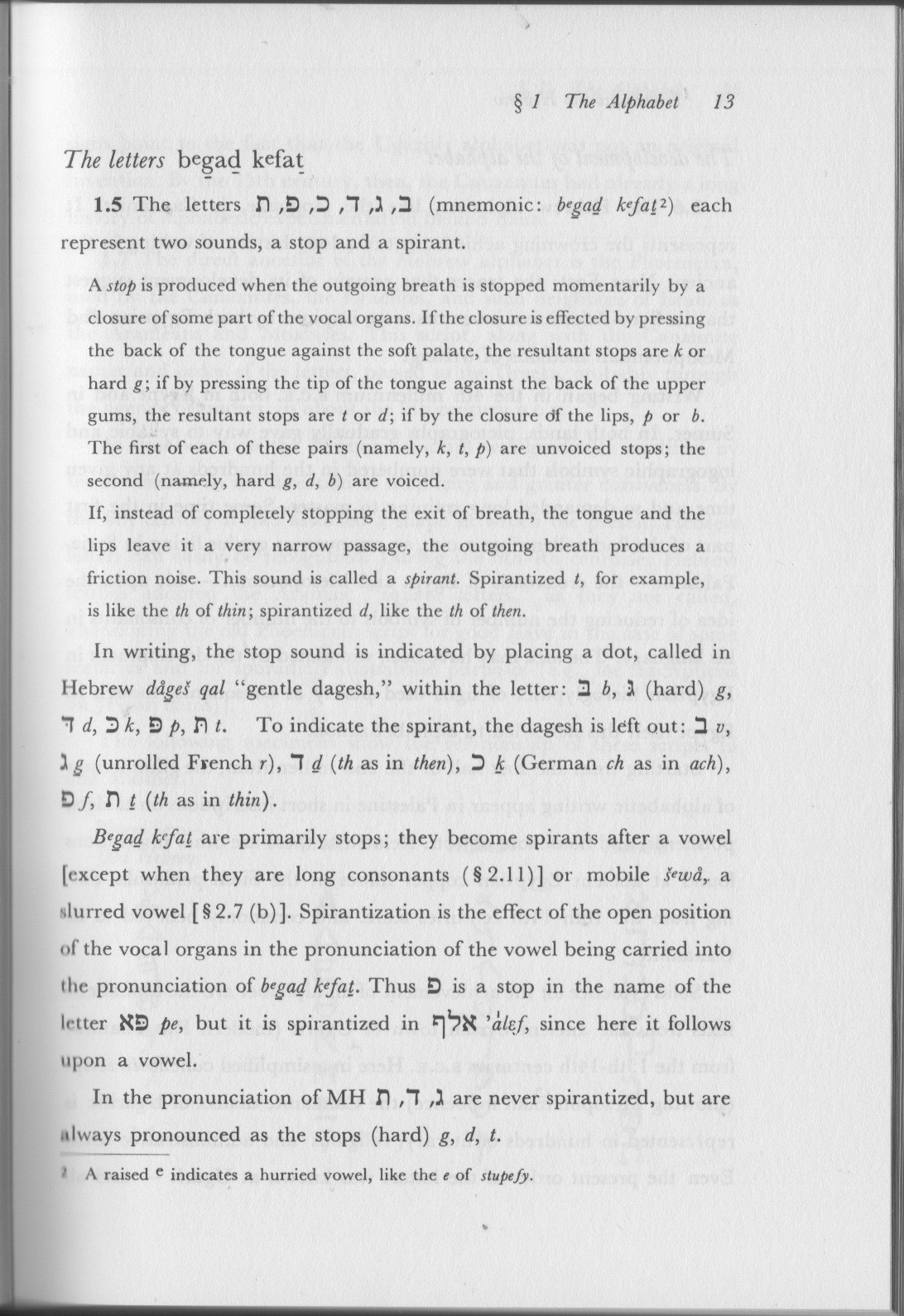 I also found instructions at the front of a Tikkun that were bewildering in their complexity, so I will not even try to summarize or apply.

I am not too familiar with the subject; I just happened to find a few sources. I don't know if complete explanation of the Dagesh is really possible, and I had not thought about Tzarchei Tzibor last night when looking at the books, only this morning when you posed the question. Just off the cuff I would say that perhaps the change in the vowel FOLLOWING the Kaf is relevant; and perhaps there's no strong explanation.

In Exodus 15:11, the song Mi Chamocha... Mi Kamocha, the first Kaf has no Dagesh, and the second has a Dagesh, although they appear in exactly the same phrase. I really don't know if that's explicable, 'tho I see now that there's a Mi Yodeya question on this last point from 2014.

Not the answer you're looking for? Browse other questions tagged blessing grammar-dikduk .

17
Why is there a dagesh in second camocha, but not in first?
3
Why is the word "Kotveinu" not "Kotbeinu" with a dagesh?

18
Why are there two different forms of the mitzvah brachot ("l-" and "al")?
18
Why aren't Purim and Channuka considered a violation of לֹא תֹסִפוּ?
5
The dagesh in "elo-ha" means what?
14
הוא is he? Or is it?
2
Why do we make blessings on mitzvot d'rabbanan at the second seder?
10
What are the rules for sh'va na?
5
What is the logic behind the Maharil's explanation of why we don't say שעשה ניסים on Pesach?
0
How should the second vowel in ציצת be pronounced?
5
The second yod in Mechiyael