I just learned of the existence of the beefalo: 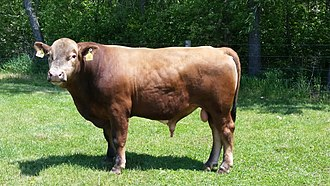 a. Is it considered Kil'ayim (a forbidden hybrid)?

b. Is it kosher, that is, can it be slaughtered and eaten (I think this would mostly hinge on whether it's Kil'ayim or not)?

I came across this here where after defining the mechanics of crossbreeding etc., and from which types of people a Jew can or cannot benefit from, he writes:

Relatively recently, a new hybrid was developed, which is a cross between the ordinary beef cattle and a North American bison, which Americans colloquially call a buffalo. Is it permitted to make this crossbreed? One major authority contends that whether one may crossbreed buffalo and cattle depends on whether one is required to perform kisuy hadam, the mitzvah of covering the blood of shechitah, after slaughtering a buffalo. Kisuy hadam is required only on fowl and chayos but not on beheimos, such as cattle. If there is no requirement to perform kisuy hadam on buffalo, this demonstrates that it is considered a beheimah. Since there are only three species of beheimah -- sheep, goats, and cattle, then ruling that a buffalo does not require kisuy hadam means that halachah considers it to be a beheimah, and, if it is a beheimah, the process of elimination proves that it must be considered a variety of cattle, since it is certainly not a sheep or a goat.

Is kisuy hadam required on a buffalo? This is a dispute between the Shulchan Aruch and the Rema, the Shulchan Aruch (Yoreh Deah 28:4) concluding that there is no requirement to perform kisuy hadam, whereas the Rema rules that one should do so without a brocha since we are uncertain whether it is considered a chayah. The Aruch Hashulchan (Yoreh Deah 297:8) notes that this dispute between the Shulchan Aruch and the Rema will also affect whether one is permitted to crossbreed buffalo with ordinary cattle, since the Shulchan Aruch, by concluding that it is a beheimah, must hold that they are halachically considered to be the same species. On the other hand, since the Rema is concerned that buffalo might be a variety of chayah, one would not be permitted to crossbreed it with cattle.

Halachic conclusion: According to the Aruch Hashulchan, a Sefardi would be permitted to crossbreed buffalo with cattle, and an Ashkenazi would not.

To answer question number two. Interestingly, according to one opinion, it is not the kosher status of the bison which makes the beefalo kosher, but the opposite. The fact that a bison can produce a beefalo with a known kosher species is what makes the bison kosher. See here

A possible way to circumvent the Chazon Ish's need for a tradition is based on the talmudic assertion that kosher and non-kosher species cannot crossbreed. Thus, if two species can hybridize, and one is known to be kosher, it is proof positive that the other is kosher as well. Since both the zebu and bison pass this "hybridization test" and produce live, fertile offspring with other domesticated cattle and both possess biblical indicia, both should be viewed as kosher.

Not the answer you're looking for? Browse other questions tagged halacha kashrut-kosher kilayim-forbidden-mixture .

4
Why do we use a tight heuristic for fish egg kashrut and not trust supervision?
13
Who determines the kosher status of “new” foods?
16
How can pigs and shellfish be kosher for bnei Noach?
16
Does Neveilah/Tereifah make you Fleishig?
3
Equipment used for cooking by a non-Jew
2
Keeping Kosher and Leather
4
If a restaurant is already halal, how much more work is it for them to become kosher?
5
In what way are hybrid plants/trees prohibited?