I've been considering getting my Orthodox Jewish friend who's learning to cook an Instant Pot as a surprise gift, but I'm not myself Jewish, so I'm a little lost here. If I want my friend to be able to cook both milk and meat dishes (as well as pareve, obviously), would I be safe in getting one Instant Pot with two different inserts? Or would it require a full separate Instant Pot?

(For reference, there is a write up of what an Instant Pot is here: https://www.digitaltrends.com/home/what-is-an-instant-pot/ )

I recently got one of these as a possible replacement for my crock pot but I have not used it yet. While I can't give a sourced halachic answer, I'll share some pictures and point out some things that would concern me in considering dual use. 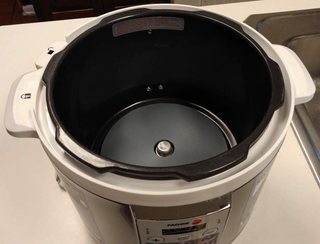 Here's a picture with the metal pan inserted. Note that the pan has a lip; if you overflowed the pan you could spill food onto the heating element, though the lip extends over it some so you could get lucky. The instructions that came with mine caution against overflows and say to never fill the pan more than two-thirds full. 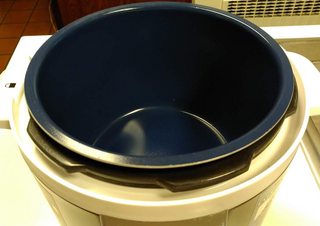 So far I would be optimistic for a careful cook such as myself and using two pans. However, there's the lid to consider: 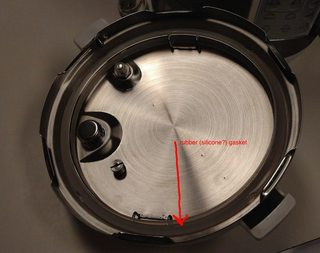 The lid is metal and would collect condensation from whatever's being cooked. Condensation is, by definition, liquid, so based on the answer to the crock-pot question, this would transmit the "taste" (meat or dairy) of the food to the lid. Further, there is a gasket inside the lid made of a flexible material (rubber or silicone, I think the latter). This is a replacable part (they wear out, I'm told).

Food or vapor coming into contact with the lid and/or gasket would be a problem. Possibly you could mitigate that by sealing the top of the inner pan with foil (maybe two layers), the way you can wrap food in a non-kosher oven. Your friend would have to consult his or her rabbi to be sure. The foil would probably interfere with some of the cooking functions; in particular, I don't think you would want to pressure-cook with a foil barrier.

All things considered, I expect to forego making yogurt in mine; it's not as simple as buying a second pan. However, almost everything I've ever wanted to cook in a slow-cooker has been meat or parve and I think pressure-cooking is a meat technique, so your friend would have plenty to make even in a meat-only Instant Pot.

Not the answer you're looking for? Browse other questions tagged kashrut-kosher .

6
How can I slow-cook dairy if my slow-cooker is meat?

1
Carnation Instant Breakfast substitute
6
Hagala for a new pot
7
Can I trust a non-kosher home's coffee pot?
7
Does instant coffee (regular - not decaffeinated) need a Hashgacha?
4
Kashering a Hard to Clean Pot
3
hot pot and trief
1
Rules for non-kosher kitchen
1
Washing up and status of a cooking pot
3
Does one need to kasher a pot that is kosher in all aspects except that kosher meat that is not glatt was cooked in it?