Can I use a cutlass for a shechita knife?

Ahoy thar! I'm trapped on a pirate ship, and I'm so hungry I could eat a cow! Hey wait, we actually have one on board!!

My problem is that the only sharp implement that I have is a pirate's cutlass. Can I use that to kill an animal in a kosher manner? Do I need to have a specialized shechita knife to kill animals? Also, cutlasses are generally curved (as in this image from Wikipedia); is that an issue?

Do I need to worry about the boat rocking?

( This question was inspired by some Winterbash things, and a discussion in Bam )

You don't need a special knife for shechitah, though it's recommended. The Simlah Chadasha (18:16) says that, in order to have a fallback option in case one's knife is lost before he could check it after (and didn't check it before), he can rely on the fact that his special knife (that was put away, and is never used for anything else) is probably free from nicks. But any knife is fine, provided that it was checked and found to be free of nicks.

The curvature of a cutlass actually isn't a problem, since it isn't curved too much. A curved knife (even with many curves in it!) is not a problem, even lechatchila, provided that the curves won't stop the finger from running along the blade (meaning, provided that the curve does not form a פגימה, a nick in the blade). (18:4) ( although curved knives are harder to sharpen and examine )

However, the point at the tip of the blade is a problem, though only lechatchila, as there is a concern that the tip will "tunnel under" (חלדה) or tear (עיקור) what needs to be cut. That point should either be shaved down, or covered with a radish or a piece of rubber -- something that will protect the tip from stabbing, but isn't too heavy so that it would make problems with דרסה (pushing down with undue pressure). (6:4) ( thank you sam for reminding me of this point )

While I don't know how heavy your average cutlass is, I'd imagine that it's probably heavier than your average shechita knife; which is fine, so long as the shochet says that he is certain that he didn't do דרסה (pushing down with the knife with undue pressure). (8:2)

I don't either know how long your average cutlass is (anything I'd google only talked about cars :P), I imagine that it's about the right length for a cow -- it should be two times as long as the neck of the animal is thick. That's pretty long for a cow; if I'm accurately judging the length in the linked Wikipedia image, then it should be fine.
However, it might be too small ( see picture ) -- the knife needs to be able to cut what needs to be cut, while leaving part of the knife outside of the neck (above the cut). If the entire width of the knife is entirely covered at any point, then the meat is forbidden because of חלדה ("tunneling"). ( the circled part of the picture is the part I'm worried about ) (24:9 et seqq) 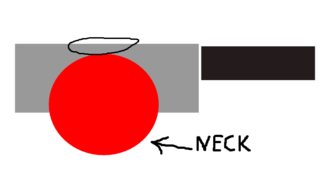 ( click link for larger image; note that this image is not to scale )

If you're on a boat, things actually get pretty interesting. You're allowed to slaughter on a boat, even though people might think that you're doing some sort of service to the "gods of the sea;" this is not a problem because they don't usually do stuff like this.
If, however, the owner of the boat doesn't want you getting his boat all bloody, your options are limited (blood going straight into the ocean is something that idolaters do). You could either slaughter such that the blood hits a board or the side of the boat before the blood goes into the water (which is problematic because it might appear that he is slaughtering in idolatrous service to his own reflection). You might slaughter into a vessel, provided that there is dirt (or dirty [=non-reflective] water) in the vessel (so that it doesn't appear as if he is collecting the blood for idolatrous service). (11:4-6)
If you can't do it, then you can't slaughter such that the blood goes into a (clean) vessel, or into the sea (כל מקום שאסרו חכמים מפני מראית העין אפילו בחדרי חדרים אסור). Also, keep in mind that for כיסוי הדם, you'll need to hang on to some blood that you can cover with dirt. ( although that doesn't apply to cows )

Another thing: pirates are not known for their skills at hygiene. (This is excusable, as they spend a lot of time far away from shore.) If your spot on the boat smells, you can't make a bracha there -- better move to a spot where it doesn't smell, so you could make that bracha. (19:3)

One thing I would add myself is that if the boat is rocking, you should make sure that you're in complete control over the movements of the animal and the knife, to make sure that the shechita is not ruined by a sudden movement of the boat.

Not the answer you're looking for? Browse other questions tagged halacha vehicles-transportation slaughter-shochet-shecht .

9
Halacha of Shechita
10
Do you have to be able to see to do shechita?
5
Eating at Home and Maarit Ayin
1
Can one Shecht with a Wire

9
Is age a disqualification for Shechita?
5
Sharpening Shechita Knife on Chol HaMoaed
5
Shechita for chicken
9
Halacha of Shechita
4
Can a shochet answer his own shechita shailos?
16
What is Lubavitch Shechita?
4
Using obsidian or titanium for shechita knives
2
"Hargasha" on a Shechitah Knife