The Wacaco Nanopresso machine is a hand-operated espresso machine. It is filled with either ground coffee or Nespresso capsules and, together with hot water, delivers a cup of espresso through a hand pump that forces the hot water through the coffee. My wife has one for travel and loves it.

Would this be permitted to use on Shabbat? I don't drink coffee so never looked at this before but reviewing other MY questions (especially Starbucks VIA on Shabbat) might lead to think it might be possible with water from a kli shlishi.

Any relevant opinion before I ask a rav? 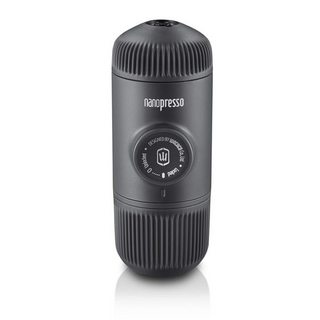 I'm not familiar with the machine you are picturing but a filter is not a problem so long as it's not (step 1) creating a mixture and then (2) separating it. So the coffee filters that are placed on top of the cup and water is poured through them should be fine.

This is based on the ruling of the Shulchan Aruch (Orach Haim, 319,9 and the Mishna Brurah 33 ibid) which allows pouring water into a sieve that has grape dregs in it, in order that the water flow though the dregs (absorbing their taste) and out through the sieve. The logic here is that the water is poured into the sieve was not mixed, and it comes out not mixed. Based on this it is permitted to pour water over tea leaves (making sure not to break the laws of cooking on Shabbat - aiyn bishul achar afiya and kil shlishi) that are in a strainer, as the tea just flows through the strainer, absorbing the tea taste, and out the other side (see Shmirat Shabbat 3, 64 [Hebrew, new edition], and the Chazon Ish, Orach Haim, 53).

This is exactly the use of the coffee filter that sits on the top of a cup. The filter cup has coffee in it, and a paper filter on its base. The water is poured into this filter cup and then drips through into the cup below after having absorbed the taste of the coffee beans.

Not the answer you're looking for? Browse other questions tagged halacha shabbat food .

17
Starbucks VIA on shabbat
4
What's wrong with making coffee on Shabbat?