Found this picture in this latin book. It seems to distinguish between a tarha and a tarha aharona. Any ideas what it is? 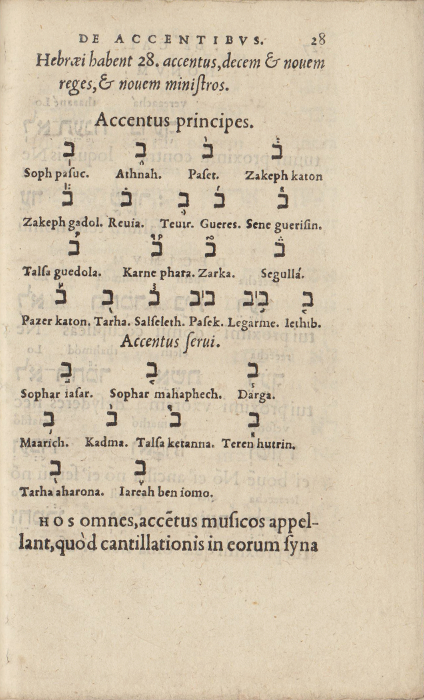 There are other helper accents that are not so common in Scripture but appear occasionally and are listed in the Mesorah. They are yareach ben yomo, mer'cha ch'fula, and m'ay'la.

He then describes the first two of those and then, in paragraph 7, continues:

He goes on to list, from the Mesorah, where these appear. Those in the Pentateuch are Gen. 8:18 "וַיֵּ֖צֵא־נֹ֑חַ", Lev. 21:4 "לְהֵ֖חַלּֽוֹ", Numbers 15:21 "לְדֹרֹ֖תֵיכֶֽם", and Numbers 28:26 "בְּשָׁבֻעֹ֖תֵיכֶ֑ם".

I'm guessing that that's what your book is referring to when it lists tarcha acharona among the helper accents, since the m'ay'la (a) is a helper accent, (b) looks like a tip'cha (=tarcha), and (c) is in some sense acharona (last), specifically in that it is on the last word of the (half-)pasuk.

Not the answer you're looking for? Browse other questions tagged trop-cantillation .

13
How to sing Karnei Farah and Yerach Ben Yomo
10
How can I learn Yemenite ta'amei hamikrah?
3
Four Zakef-groups in one half-verse
2
Not All Te'amim Signs Musical?
9
Where can one learn the grammatical functions of the te'amim
7
Does the Mishnah have Taamei Mikrah?
2
Ambiguity due to lack of punctuation