What has the Holocaust taught us as a people?

The Holocaust was one of the most horrific and important events in our history. What have rabbis said are lessons we should take from it?

I am looking for lessons that should apply to all Jews, particularly those that should apply to our lives and outlook. References to notable speeches or documents addressing this topic would be a welcome addition to any answers, as I'm looking more for consensus or "generally notable" answers (such as from rabbis of major influence), rather than individual opinions.

See here for an article by Howard Shultz, chairman of Starbucks, describing his meeting with Rabbi Nosson Tzvi Finkel, in which the latter teaches him "the lesson of the Holocaust."

"Okay, gentlemen, let me tell you the essence of the human spirit.

"After hours and hours in this inhumane corral with no light, no bathroom, cold, they arrived at the camps. The doors were swung wide open, and they were blinded by the light. Men were separated from women, mothers from daughters, fathers from sons. They went off to the bunkers to sleep.

"As they went into the area to sleep, only one person was given a blanket for every six. The person who received the blanket, when he went to bed, had to decide, 'Am I going to push the blanket to the five other people who did not get one, or am I going to pull it toward myself to stay warm?'"

And Rabbi Finkel says, "It was during this defining moment that we learned the power of the human spirit, because we pushed the blanket to five others."

And with that, he stood up and said, "Take your blanket. Take it back to America and push it to five other people." 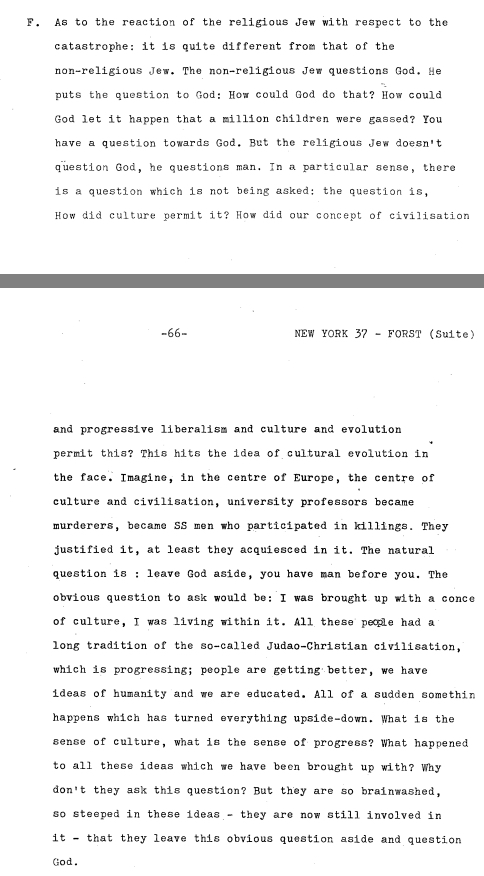 Many years ago Rav Kook gave the following speech

On Holocaust Memorial Day at Merkaz Harav Yeshiva decades ago, Rabbi Kook approached the question from a perspective which embraces all of Jewish history.

Introduction: Many scholars and philosophers have put forth theories which attempt to explain the Holocaust. One Haredi point of view focuses the blame on the Reform Jews in Germany who broke away from the Torah. Another attitude blames the secular Zionists for having brazenly established a non-religious settlement in the Land of Israel before the Mashiach’s arrival. Rabbi Tzvi Yehuda HaCohen Kook had a different understanding. These theories, he said, failed to embrace the whole sweep of history. The workings of Divine Providence cannot be isolated to any one moment, or group, but must be seen in the context of the “Divine Historical Plan” which spans generations. Accusations that blame this group, or that group, fracture the unity of the Jewish Nation. Just as G-d is One, the Nation of Israel is one. Only from this encompassing perspective, which embraces all of Jewish history, can one hope to fathom the Divine Will in the horror of the Holocaust. Rabbi Tzvi Yehuda spoke the following words on Holocaust Memorial Day at the Mercaz HaRav Yeshiva in Jerusalem:

Today is Yom Hashoah here in Israel and here are a couple of important [yet unspoken and unpopular] lessons on this topic:

5
How does Judaism answer the problem of evil?