Fish in Aquarium During Flood

The Gemara (Zevachim 113b) mentions the fish in the sea died:

Would that mean fish kept in ponds or aquariums would have died?

Clearly the word "yam" here denotes any body of water, be it an ocean, sea, lake, etc. Jastrow concurs with me that the word has other meanings aside from "sea": 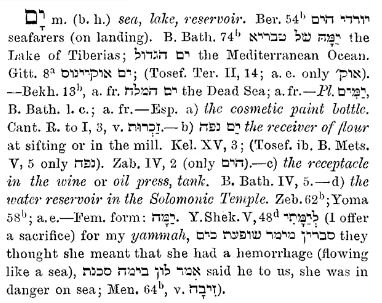 A good thing to know is oftentimes a Hebrew word will have more than one accepted meaning.

The Petach Einayim emphasizes that "Mikol asher b'charava" applies specifically to those things that were on dry land from the beginning. As such, even creatures that might have been captured from the sea and brought onto dry land like the scenarios you presented would still have been spared. At least, that's how I'm learning it.

It's too lengthy to quote in full here.

Not the answer you're looking for? Browse other questions tagged parashat-noach mabul .