Why do we say מודה אני and not אני מודה?

Why in the morning do we say מודה אני and not אני מודה?

מודה אני isn't unusual in this regard. We also say מודים אנחנו לך, for example, and ברוך אתה in lots of places. The prayers are, by and large, written in the style of Biblical (and rabbinic) Hebrew and preserved in that form.

The idiom אני מודה, according to Sefaria’s search engine, appears 4 times across Gemara and Midrash (only one of them is in the Gemara), while מודה אני appears 30 times across the same sources, including a broader range of Midrashim, plus Tosefta and Avos d’Rebbi Nassan. So on the one hand, it’s not unheard of to use אני מודה, but on the other hand, it’s also significantly more common to use מודה אני.

I remember reading an article(maybe Aish.com?) that explained the reason for starting our day with the word "modeh" and not "ani": so that we don't start our day with "ani"/me but, rather, "modeh"/I am thankful.

Too many times can we feel frustrated if things don't go our way. But why? Because we think it depends on "ani"/me. Emunah teaches us the opposite. Since HaShem is active in our lives and everything He does is for our best, then I am "modeh"/I am thankful.

Monica's answer (and the supporting comments) is probably the correct one. I would just add that, otherwise, "fronting" a constituent is a means of emphasis.

Biblical Hebrew is usually VSO (which means Verb Subject Object), so the verb should lead, and bringing the subject or object to the beginning is a way of emphasizing it. However, if the typical order for the present tense were to be to put the subject (ani) first, then the purpose would be to emphasize the gratitude.

See here, in Modality and the Biblical Hebrew Infinitive Absolute. 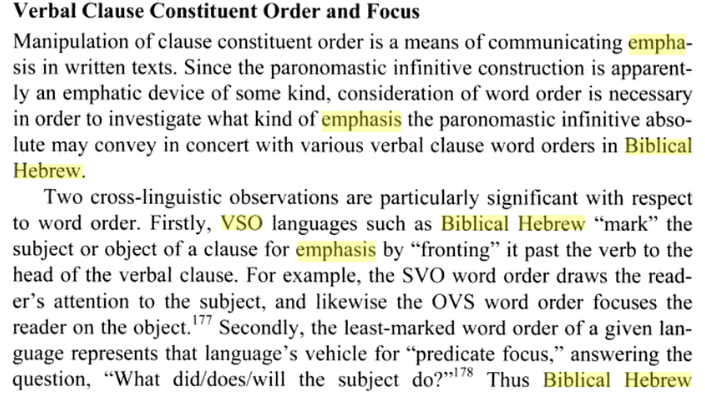 Not the answer you're looking for? Browse other questions tagged tefilla hebrew .

5
Why announce Mashiv Haruach and not Vtein Tal?
4
Why don't we say Ein KeLokeinu on Tisha BeAv?
3
Not saying shir shel yom on Rosh Chodesh?
6
Which of these weekday morning prayers do I say?
12
Why is the afternoon prayer called minchah?
5
Why not fulfill the birchat hashachar with the leader?