The Wikipedia page on tefillin shows cylindrical tefillin found in the Cairo geniza, with reference to this image from here: 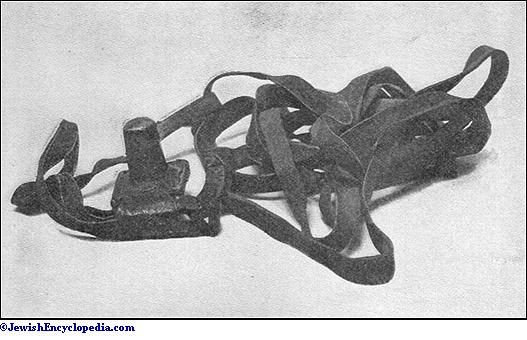 The source from the Wikipedia page cites this: Kiell, Norman (1967). The psychodynamics of American Jewish life: an anthology. Twayne Publishers. p. 334. Retrieved 4 July 2011. The short excerpt I can see from this book writes "The cylindrical form was only later fully replaced by the cubical. The Talmud describes the 'round' form of the totaphoth as a danger..."

In the earliest known archeological find (with the Dead Sea scrolls) all tefillin were square (source), and I can't seem to find any more images of cylindrical tefillin.

The Mishnah in Megillah 4:8 says that "one who makes his tefillin 'agoolah' [Bartenura: like a nut or egg], it will endanger him, and there is no mitzvah in this". The Bartenura then says that square tefillin are Halacha LeMoshe MiSinai. If this is the case, why were tefillin ever made cylindrical? And where did the (presumable) superstition come from that made wearing them 'dangerous'? What finally made the practice obsolete?

I found another reference to non-cuboidal tefillin here which claim to be of Yemenite origin: 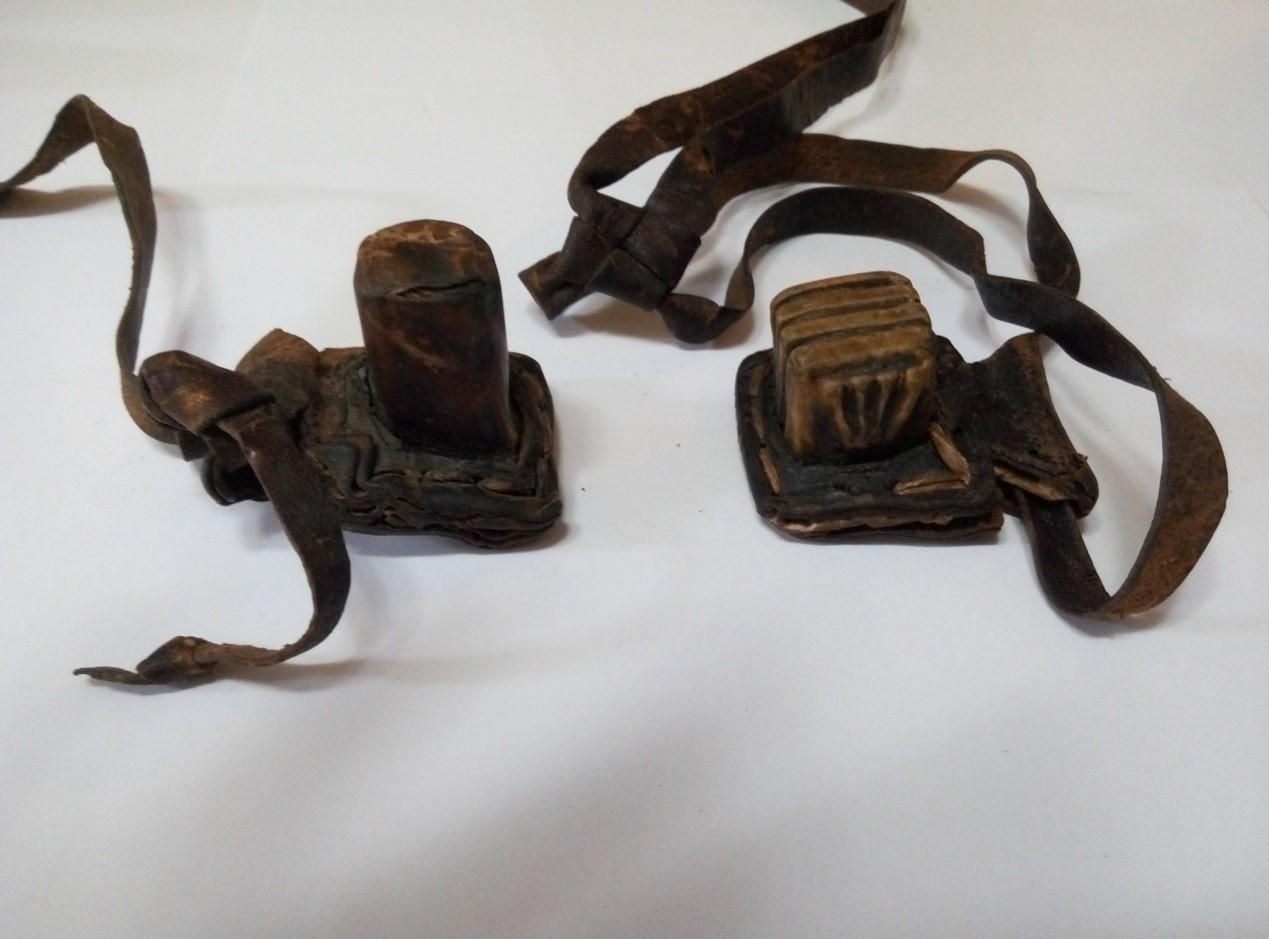 The Talmud (Menachot 35a) says:

תנא: תפילין מרובעות - הלכה למשה מסיני. אמר רב פפא: בתפרן ובאלכסונן. לימא מסייע ליה: העושה תפילתו עגולה - סכנה ואין בה מצוה; אמר רב פפא: מתני' דעבידא כי אמגוזא.‏
It is taught in a baraita: The requirement that phylacteries be square is a halakha transmitted to Moses from Sinai. Rav Pappa says about this halakha: Square means along their seams and their diagonals, i.e., they must be perfectly square where the compartments are sewn to the titora. The Gemara suggests: Let us say that a mishna supports this opinion (Megilla 24b): One who fashions his phylacteries in a round shape exposes himself to danger, and it does not enable him to fulfill the mitzva of phylacteries. Rav Pappa said: This is no support, as one can say that the mishna is referring to phylacteries that are fashioned like a nut, i.e., their underside is rounded, and therefore there is a danger that if he strikes his head on a wall the underside will press into his head and injure him. By contrast, if the underside is flat one might have thought that it is fit despite the fact that it is not square. Therefore, the baraita teaches that phylacteries must be square. (Sefaria)

Tosfot there already suggests that this sounds like only the stitching at the bottom needs to be perfectly square, not the leather box on top. The Orchot Chayim (Tefillin 27) and Semak (#153) quotes "some" who are strict to have the box be square as well. The Mordekhai (Halakhot Ketanot) famously (cf. Magen Avraham to OC 32:39) disapproves of "those who make the hand Tefillah in a press that is round at the top and square at the bottom".

So clearly this position was out there. It's thus not surprising to find an ancient example of it (particularly in a Geniza after the currently accepted position became dominant).

There's further debate among those who apply the "square" rule to the boxes if it suffices that they be rectangular and if the rule applies to the heights of the boxes as well. The perfect cubes you see nowadays were not the norm historically. Non-rectangular Tefillin-boxes existed until quite recently in some Eastern Jewish communities (cf. Pe'ulath Saddiq 3:205, Rav Pe'alim 4:2).

On page 35a of Masechet Menachot of the Talmud Bavli, Rashi explains that it's a danger because the tefillin could enter his head if he bangs into a door.

The Tosfot and Turei Even says that in a time of danger, it won't protect him because there is no mitzvah to wear round tefillin.

Rabeinu Chananel explained that the danger exists when the wearer will place his head on his arm during tachanun and the round tefillin may pierce his head.

According to the Steinsaltz edition of the Talmud, some Rishonim(don't know which ones; would be interested to know, though!) restricted the danger of round tefillin only to the head tefillin, and not to the arm so long as it had a square base; as shown in the picture above. See here: https://steinsaltz.org/daf/menahot-35a-b-shapes-and-colors-of-tefillin/

And here for source: https://daf-yomi.com/Data/UploadedFiles/DY_Item/749-sFile.pdf

So your new reference to Prof. Amar's book picked my interest, so I took it out of the university library a couple of days ago. Turns out it's really more of a kuntress...but it has great info. I'll summarize the info that pertains to your question (I'll also note that he brings many sources from poskim and such):

It turns out that in past generations, most communities did not have the proper tools to shape cattle leather (בהמה גסה) into tefillin, and so resorted to using the leather of small flock animals (בהמה דקה - looking for a better translation of the term...). This leather could be shaped more easily, but that meant that it could also warp relatively quickly. Often the upper part of the batim would warp and become any of the following: Cuboid with rounded corners; a tube that has taken on the shape of the rolled-up scroll; a tower shape (wider on the bottom and gradually becoming narrower) - either a cuboid or a tube; or having a cuboid base and a tubular upper section. Some examples: 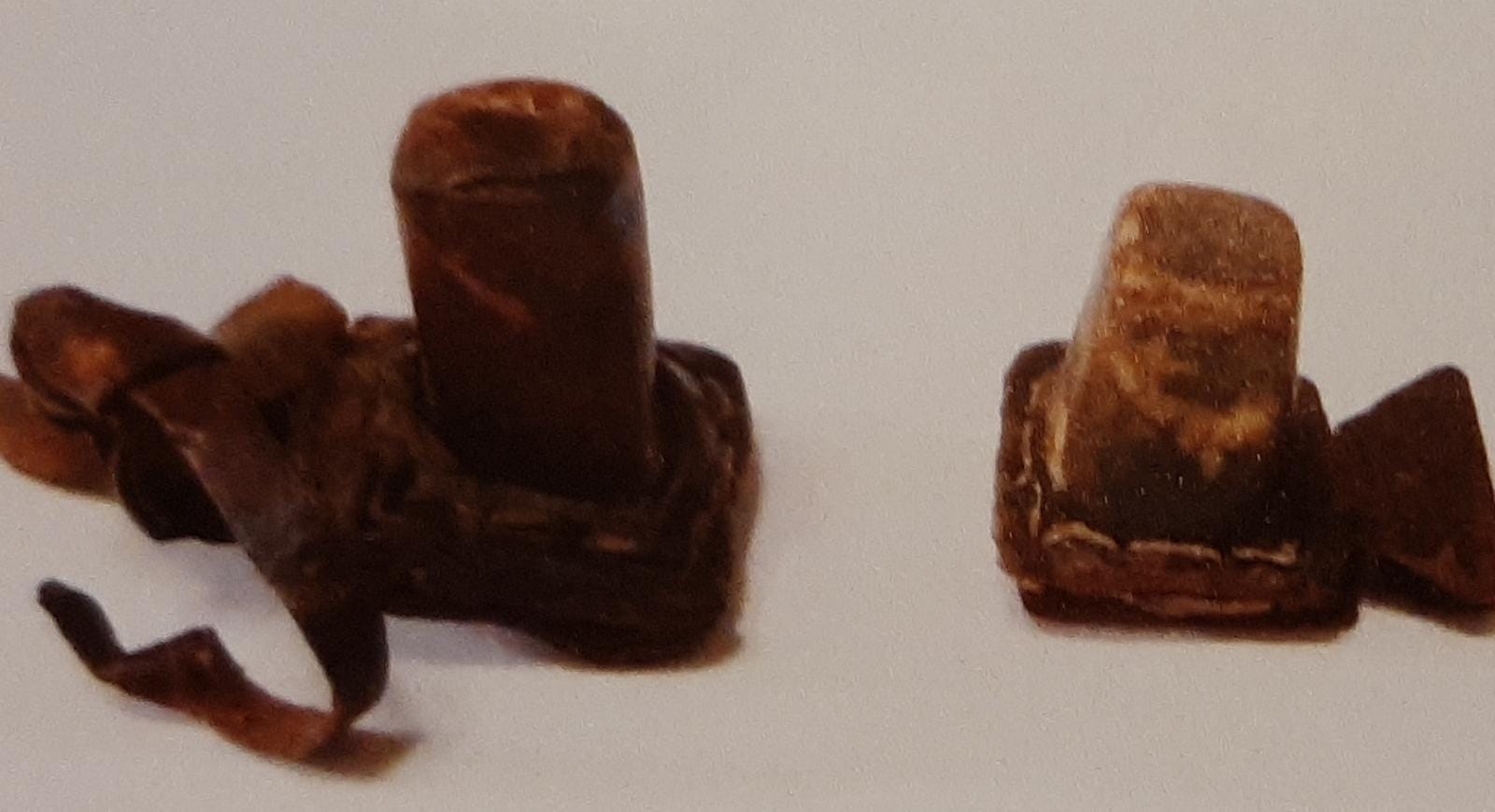 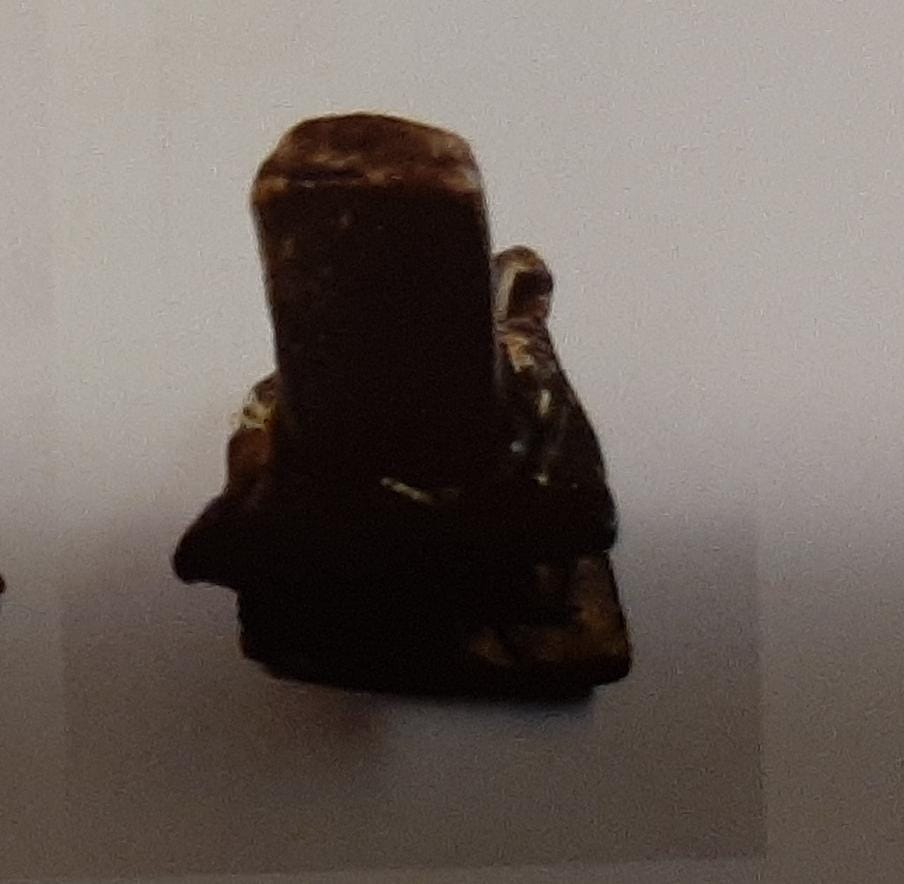 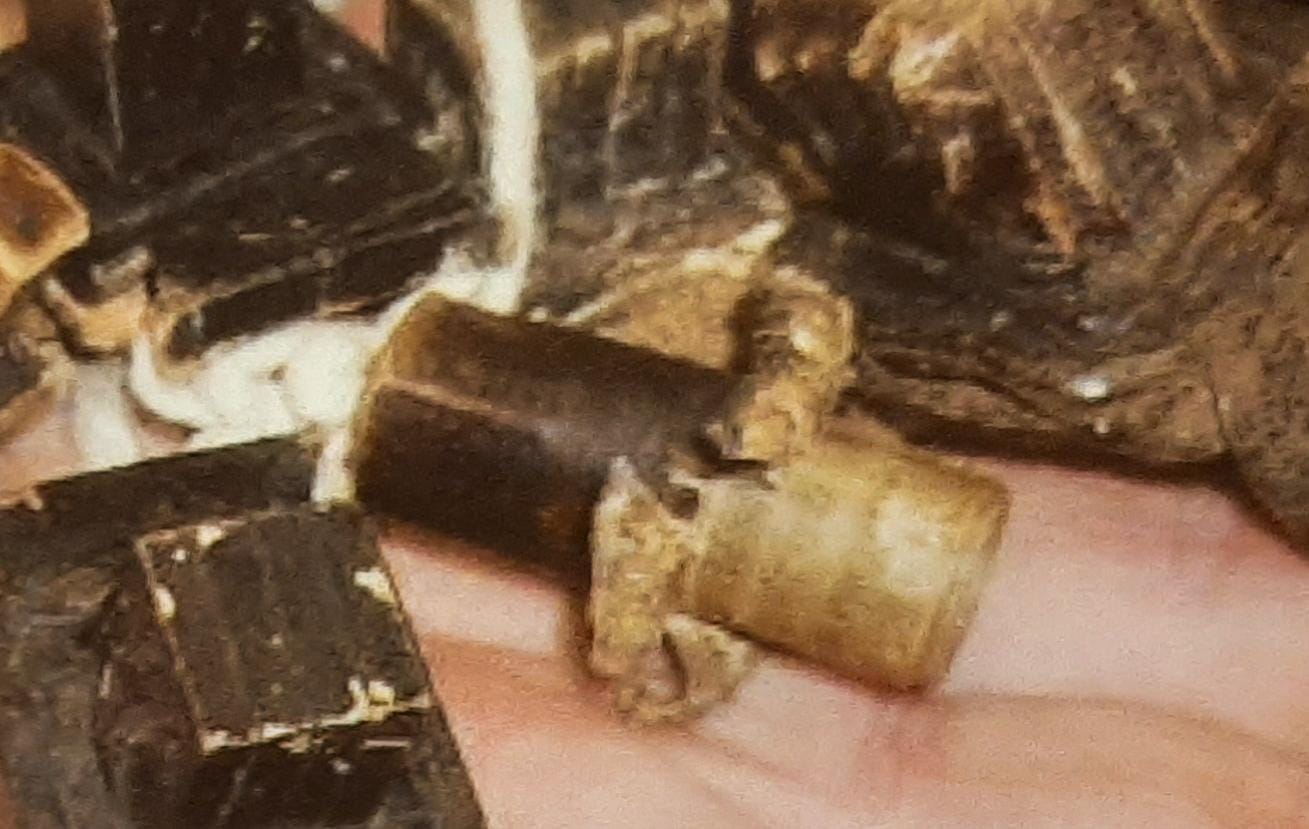 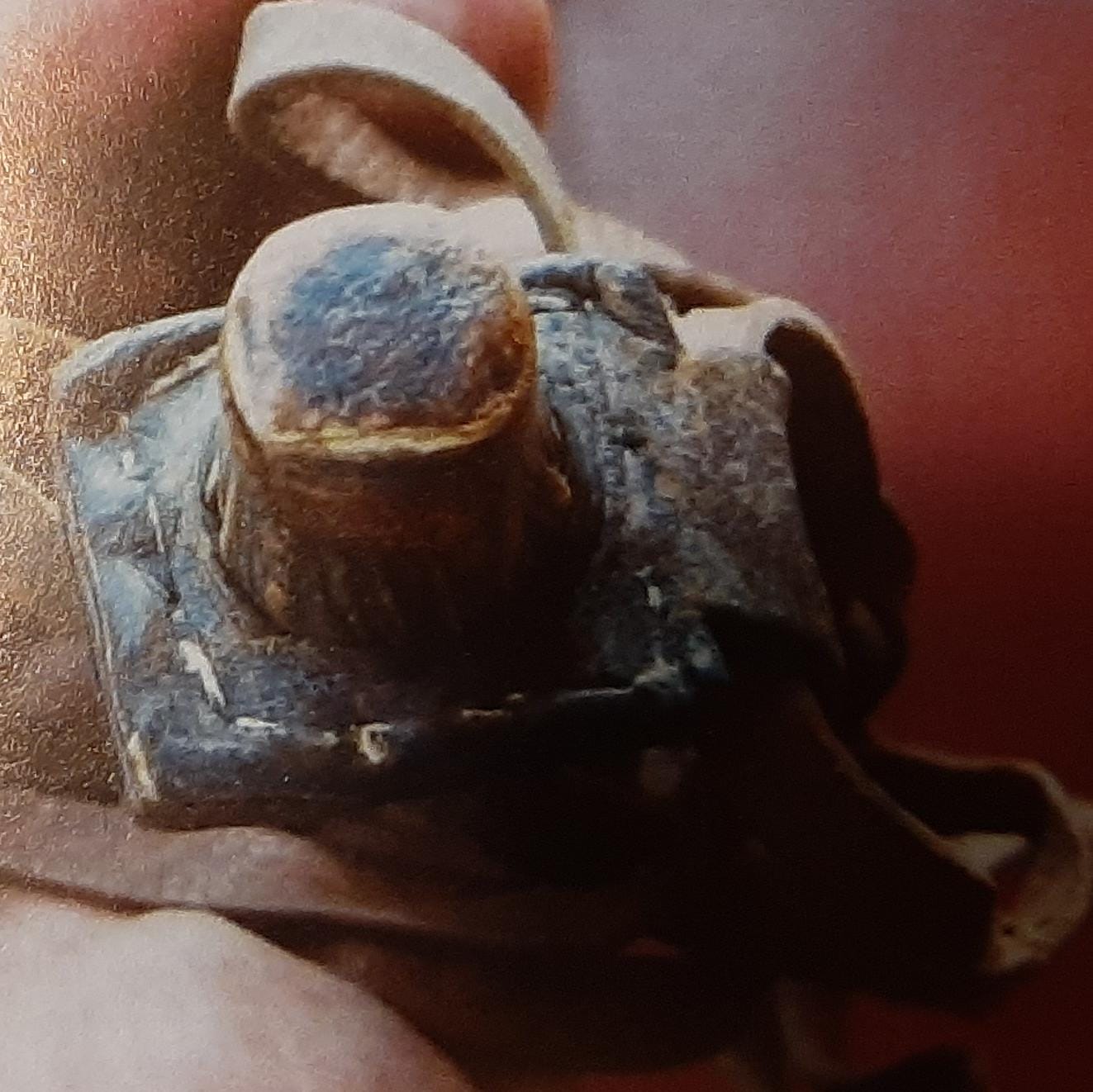 (picture copyright to Prof. Amar and those he lists in the kuntress)

There were also cases in which the makers were unable to - or chose not to - make the tefillin perfectly square in the first place, as seems to have been the case here: 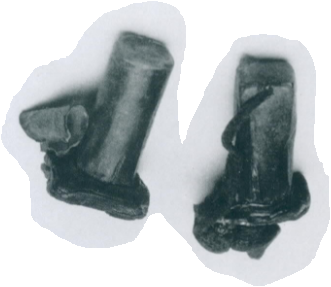 Nonetheless, Jews continued using these tefillin, which naturally begs the question: How does that square (excuse the pun) with the gemara?

"...About round tefillin, it says in the mishna: one who makes his tefillin round it will endanger him, and there is no mitzvah in this" - it seems that this is not referring to this sort of tefillin...for it is unimaginable to think that the Rishonim and Acharonim used tefillin that were unkosher. For a few suggestions, see Tefillah Le'Moshe, pg. 56-57; Habermann, pg. 176-177.

I have not checked Tefillah Le'Moshe yet, but A"M Habermann had an interesting suggestion. He suggests that originally, tefillin were only scrolls without batim, tied around the head. Later, as people wore them for longer durations during the day and there was fear that the scrolls would be ruined, batim were created1. In the time of the gemara there were sects that did not have batim for their tefillin. They would place the scrolls on their foreheads and tie them straps. He suggests that "round tefillin" meant that they would spread out the scrolls all across their foreheads in a rounded manner. Such tefillin would have been easily recognized by Roman authorities, thus endangering the wearer, while tefillin with batim would have looked more like little amulets (and apparently that's what the NT called tefillin - amulets). He believed that this makes the following statement better understood (Brachot 23a):

"Rabbi Meyasha, son of Rabbi Yehoshua ben Levi, said: The halakha in this case is that one rolls up the phylacteries in their straps like a scroll, and holds them in his hand opposite his heart."

This refers to tefillin that aren't in batim but were only scrolls with straps. Therefore, the comparison of rolling "like a scroll" makes more sense (then the commentators' suggestion that it refers only to the straps).

In short, we find that the prohibition of making round tefillin does not refer to cylindrical batim.

1 This suggestion doesn't negate the concept of "The requirement that phylacteries must be square is a halakha transmitted to Moses from Sinai" - we may say that when there are batim, then they must be square, and this was given at Sinai.

Not the answer you're looking for? Browse other questions tagged halacha minhag history tefilin genizah-storage .

1
Is it permitted to have zodiac symbols in a synagogue?

9
Direction of Tefillin Winding
7
Tefillin Gassot
2
What is this tefillin minhag?
0
How tefillin shel rosh are made?
2
Winding Tefillin Strap Around Middle Finger
7
Recovering soiled tefillin
2
Tefillin on the chest
3
Genizah of tefillin: why strict genizah for the head, but standard genizah for the arm?