This question is about how to make the yamim noraim services profound cognitive experiences when there is barely time to say the words in the machzor and only rarely time to reflect on the words (e.g., perhaps during the processional, or hagba).

The RH and YK davening are chock full of words. The machzor has many pages. Just saying all the words in the machor is a full time, even daunting undertaking. What are the best parts to omit so that one has time to reflect and think? (I struggle with this each year. I may have asked this before, but I did not find this question using the primitive SE search engine. If this has been answered before, please point me to that answer and accept my apology for posting a dup.)

Update 1: I found this posting on the web-
"... my Rosh Yeshiva ... announced ... if you can’t keep up, start each piyut and read as much as you can with as much Kavana as you can apply (use translation if that helps), and when the Chazan reaches the 13 midot, skip and recite the midot with the congregation and then go on to the next piyut."
Source: http://www.beyondbt.com/2017/09/12/the-selichot-experience-in-the-eyes-of-a-baal-teshuvah/ (scroll down to the comment by Michael).

Update 2: I ran Update 1 past a rabbi whose opinion I respect and he said, simply, That's what I do. (An O rabbi.)

Update 3: The unusual length of the RH davening is discussed in the Talmud itself, Masechet Rosh HaShanna on page 35a. And the davening has gotten much longer since then,

Try beforehand reading through all the davening in English (or any language you understand), so you get an idea what is really being said. This will show you that what is being said itself can be used as a springboard for thought and reflection, and that you may even be anticipating certain passages. Also, that it is not chock full of words, rather all the words are of value. It may also show you that it’s not daunting at all - rather an orderly arrangement. There are certainty many poems that many congregations don’t even say, so if yours is saying them, consider skipping them.

The Shulchan Aruch says (Orach C. 100) the prayers of holidays and Rosh Chodesh require one to take special preparation before praying, so that it flows right when praying.

In the Slichos, ‘סליחות המפורש’ (which in turn, I recommend you look into their other Machzorim), there is an introduction, here is part of it, in rough English translation:

One of the causes which prevents one who prays from understanding his prayers is the extant difficulty in understanding the difficult and exotic words used in prayer, specifically in the piyutim - it’s meanings are mostly hidden and only a drop reveled. This stems from several problems:

1) The language of the piyutim is very concise and difficult; The words are made up of exalted and hidden concepts and ideas. Additionally, quite often the words are based on Aramaic words directly from the Talmud.

2) In essence, the piyutim are arranged based on Tanach, Gemara and Midrash. In that, in order to grasp an understand of what they’re saying, it requires one to have a broad range and breadth of knowledge in these areas. And indeed you will not find any piyut that is not drawing from these sources. Additionally, the quick pace at which they are said prevent the reciter to look up and reference what is being said, as he says it. This coupled with that will truly weigh down on the one praying and prevent one from understanding the simple meaning, as well as perhaps a deeper meaning.

This fact causes great difficulty on the one praying to understand the depth of the prayer and its significance and meaning. And sometimes even, the recitation of selichos (piyutim) turns into a great and heavy burden that causes one the to want to finish up as quickly as possible. And in that, the essence of these recitations are lost, that is: to ask and plead from the depths of ones heart from The Master of Forgiveness (‏אדון הסליחות), that He forgive his nation, Yisroel of their sins. 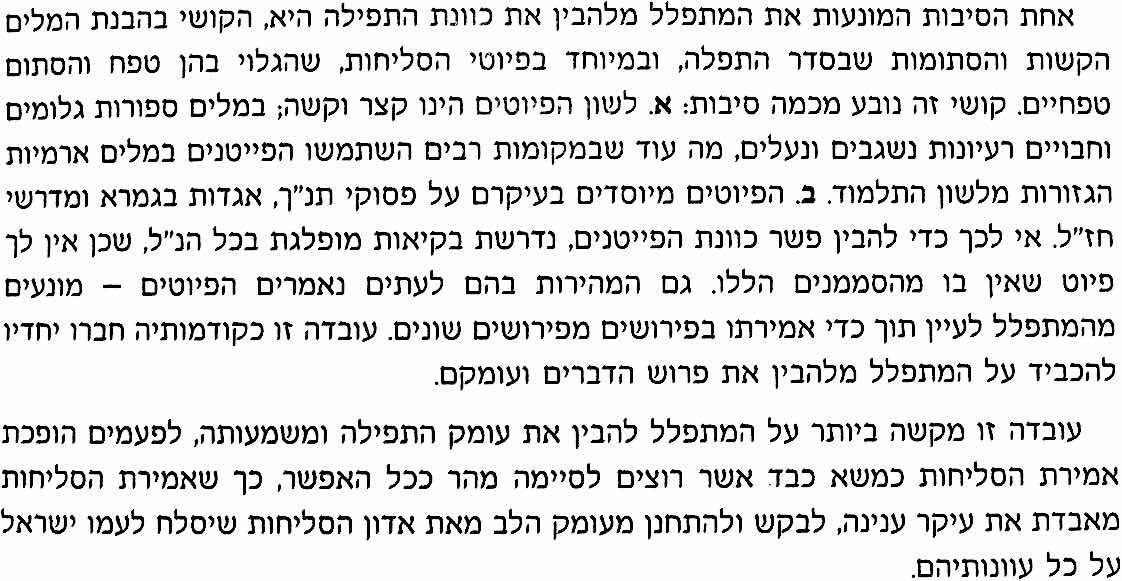 Since the question can be answered with mostly opinion based statements, I hope you would forgive me if I could not cite halakhah for all my claims. I dare to give an answer due to my (limited) experience as a chazan.

First, the purpose of different piyutim should be considered. Our sages of blessed memory composed these religious poems in order to increase the solemnity of the service and on yomim noraim to induce introspection and self-reflection. The piety of authors, such as R' Eleazar haKalir or the Chasidei Ashkenaz should serve as an example of right attitude on these days. Due to the complexity and often metaphoric meaning, one should do efforts to read and understand these poems in advance. Many of them feature Maasei Merkavah, which might be difficult for advanced learners as well.

Therefore one should really know what can be considered obligatory (mostly based on minhag), and what is an additional feature that is a very meritorious act to say. In Ashkenazi practice piyutim are inserted between the blessings of the Shema (yotzer, ofan, zalut) and in the repetition of the Amidah, mostly around the first two blessings and between the verses of the Kedushah.

Although I'm not aware of clear halakhic reference, but all of them are optional in theory. Some even oppose such additions, this is why we ask permission in advance to say them (Misod chachamim), but Mizrachim barely add piyutim to the repetition. Orach Chayim 620:1 praises the practice of limiting piyutim in the morning prayer of Yom Kippur to finish musaf on time.

The selection among these poems are more treacherous waters, and based on the local minhag the rabbi and the chazan should agree on the parts to be said. A very common choice to omit are the selichot of Yom Kippur. Others may be selected on the indications of the machzor. My Schlesinger books rarely say that certain parts are omitted by many congregations, but very fine print and the lack of translation might give a clue. Artscroll took one step ahead and, after consulting local rabbis, put many piyutim in appendix. To the contrary, my teacher always said as a rule of thumb that those poems shouldn't be omitted, when the Ark is opened.

So there is a clear obligation only for the Shema, its standard blessings and the parts said in the silent Amidah, but I could hardly imagine a Yom Kippur service without Untaneh Tokef or the service in the Temple to name a few. Everything depends on the local minhag, which should reflect the frumkeit of the congregation and should avoid tircha detzibura.

I suppose Artscroll has good indications to start with, and you could focus on the parts that serve your spiritual growth at the current level. Since it's very hard to maintain a proper attention even on a short weekday service (see discussions about Pitum haketoret and the Akeidah), I would suggest you to start with less, and proceed if you feel familiar with the recited parts (see also Orach Chayim 1:4).

Suggested sources are more than welcome.

12
What are the parameters of Tircha D'Tzibbur
3
selichot on yom hakkipurim
5
Is it necessary to include Seder HaAvodah in the Musaf Repetition on Yom Kippur?
3
Names of mazalot in Judaism

5
Sign Language During Davening
8
How to inspire tears in davening?
8
What to think about during each shofar sound
11
Davening for the interminably ill
1
Why do tefillot dealing with repentance frequently contain verses about our oppressors?
6
Using a Fidget Spinner During Davening
6
Evidence of 2nd Temple Liturgy @Temple &/or Synagogue
4
Better less with kavannah than more without?