I think this question might be best answered by a professional sofer or someone who has written a Torah even once.

I'm curious what sofrim do to assure that verses like these happen this way. Do they begin writing each of the 6 verses first at the top of a column, perhaps at the start of a new piece of parchment, and then write the rest of the Torah to "fit in" to these verses? How do they accomplish this "feat"?

Everyone nowadays uses a pre-printed layout of the whole Torah where whoever designed that PDF thought it through on the computer and made it work.

Historically, you could copy from a Torah scroll that had it worked out if you were lucky enough to have one, stretch/shrink letters and/or column widths to get it to work out, or skip out on this custom.

Many, many Poskim opposed the second method (see Rama YD 273:6) though it was still quite commonly practiced.

R. Menachem Di Lonzano in his Or Torah cautions:

See here for a survey of ancient codices and how they dealt with this issue.

1 - As @DoubleAA writes in the comments on the question, Sofrim write from a Tikun nowadays. These Tikun Sofrim were arranged by expert sofrim to conform with many rules, not just the ב*"ה שמ"ו rule mentioned in the question. They"ve been around for many years,even before the computer age.

2 - Each column has 60 "spaces" per line. A space would be the size of a Yud, so an Alef would take up three spaces. At the beginning of each line there two letters, indicating how many "letters" are actually written on that line. י"ג would mean יתר ג, there are three extra spaces needed for all these letters, so squeeze the letters a little. ח"ב would mean חסר ב, there are two letter spaces that are actually not needed, so space out the letters more. ש"ת means that there are exactly 60 letters. Spaces between words count as a "letter". [See attached Megillas Esther.]

3 - I know of an old Sefer Torah (written without a tikun), where the sofer "messed up", and realized he needed to get הבאים before אז ישיר as the first word on the column a little too late. He stretched out the letters להאדר"ת in the column before אז ישיר to get הבאים in the correct place. It is kosher, however nowadays many would question any sofer that writes without a tikun. 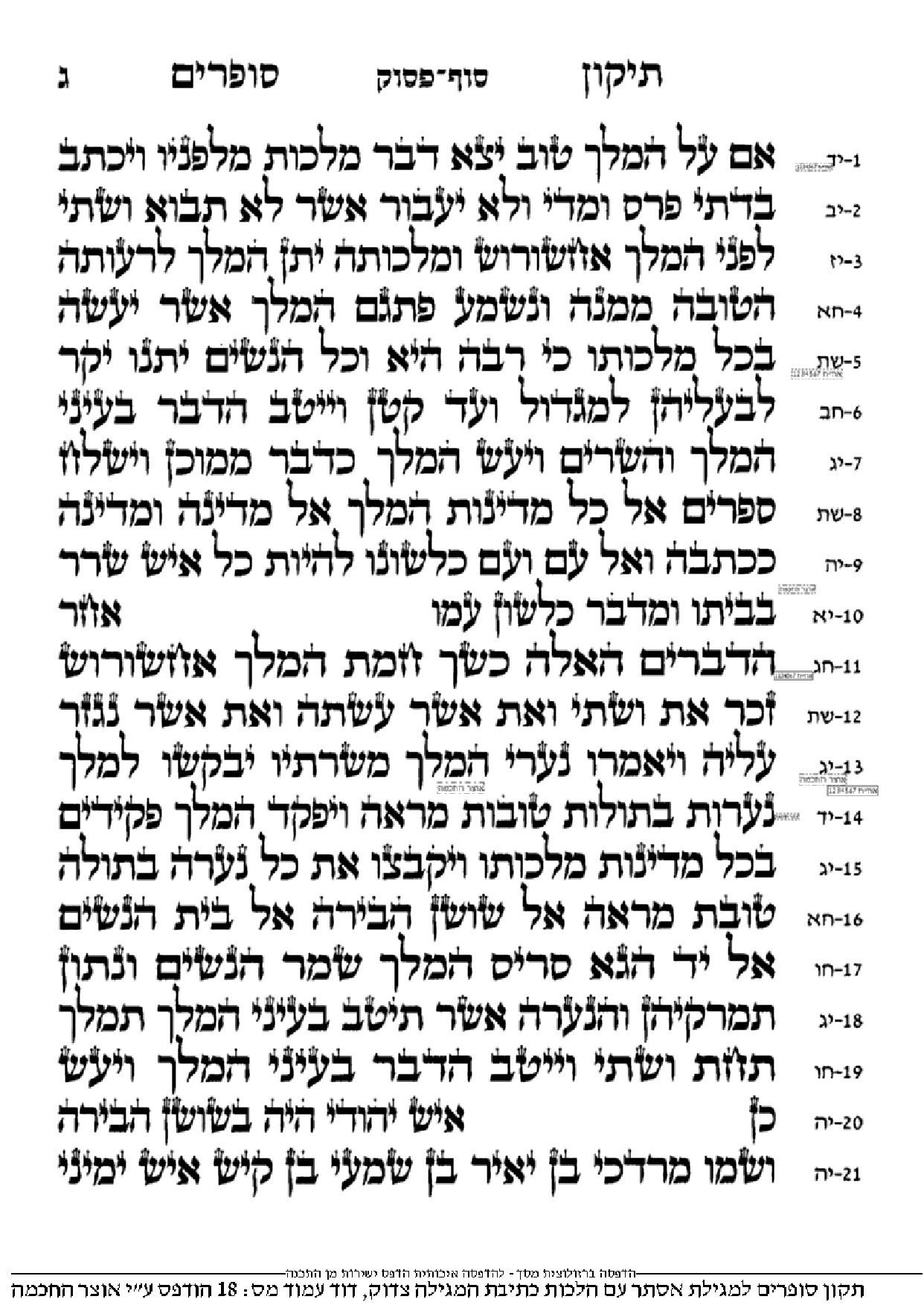 Not the answer you're looking for? Browse other questions tagged safrus .

3
Antiquarian Safrut
6
Is there a standard format for the start of each column in writing Sifrei Torah?
2
When Sofrim write Sifrei Torah, do they think of the Ba'alei Kri'ah (readers)?
2
Are the tagin considered part of the letter itself?
3
Is one allowed to remove sections from a Torah to repair one or more pasul ones?
3
How are Sifrei Torah typically checked today?
5
Is there an online resource that gives an “overview” of safrut?
1
May one read from a Torah that has uneven parchment?
0
Are all Vavei Ha'amudim Sifre Torah created today, identical?
2
Do all the letters in Sta“m need to be the same ”baseline" height?