Birthmarks - What are they?

Browsing online I saw this quote:

I messaged the guy and he claims it's a joke and theres no source. Doesn't even believe in reincarnation. Thinking about it all now, it makes sense going back to Cain and Abel.

So what does Judaism have to say about birthmarks? Is the quote above true to some extent?

It has been quoted in the name of The Great Rebbe Moshe Tetelbaum of Uhel, Author of YISMACH MOSHE, that he said he remembered the different gilgulim (incarnations) which he had been in in his past lives. He is quoted to have said that in his first gilgul he lived as one of the sheep in the flock of Yaakov Avinu, and that he added that and once Yaakov had hit him with a strap for going out of line, and that he still had a mark on his shoulder, which he showed to his students, which was caused by the said lash from Yaakov's strap 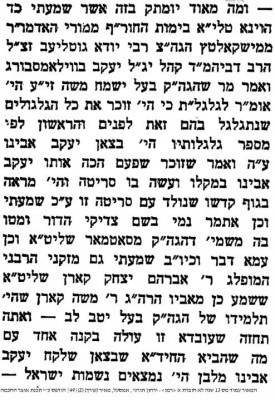 (And some say that he remembered the tune that Yaakov sang while leading his flock).

This does not mean to say that every birthmark, Mongolian or other, is a sign of reincarnation, It is just an example of one such mark which told the story of the bearers incarnation.

Not the answer you're looking for? Browse other questions tagged parashat-bereishit reincarnation .

2
What is the Purpose of Punishments in the Afterlife?
5
What was Hevel (Abel's) sin?
1
Are all non-human creations reincarnations?
6
What are the 10 utterances in Pirkei Avot 5:1
3
What are the 3 worlds of the Kli Yakar?
1
In what sense does the Arizal claim that Rabbi Akiva was the reincarnation of Cain?
7
Did Adam and Chava have a child before they sinned? Was childbirth not painful before they sinned?