Typically in the Yeshivish world, the "O" sound is pronounced as "Oy" (i.e. "Moydim Anachnu Loch"). Where does this come from?

I've contacted Dovid Katz from Vilnius Gediminas Technical University, a renown scholar of the Yiddish language (among others), who wrote numerous papers on linguistics, and his PhD dissertation discussed in detail the phonology of the language(s) that Ashkenazi Jews spoke. As I could understand of his letter and his works, there was a proto-Ashkenazi long ō for cholam that was affected over the centuries by different linguistic phenomena (Great Yiddish Vowel Shift, see pp. 71–73 here and in his dissertation on pp. 77–81). First this resulted a vowel that he calls ɔu42, and it was further affected by the changes in the Yiddish language that they spoke (which was influenced by the German dialects of that era).

The fate of this sound used for cholam was connected with the following long vowels and diphthongs that existed in the various German dialects (see pp. 51–52): 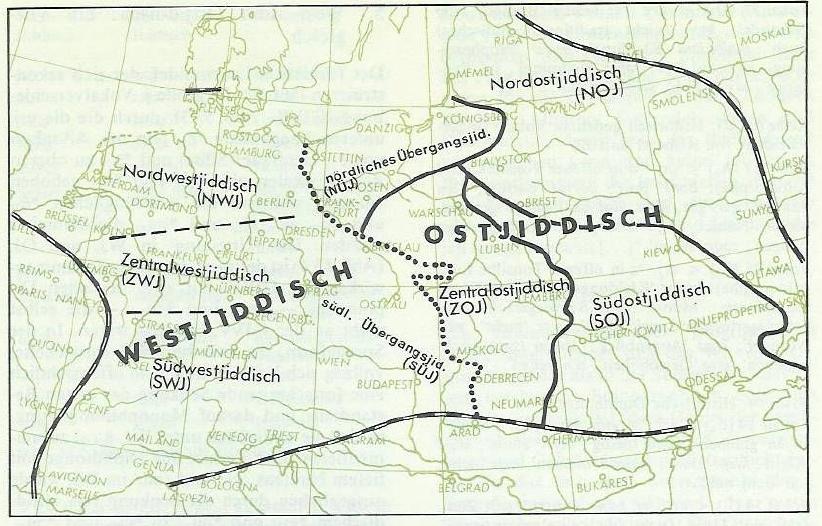 In the areas, where the dialects of Western Yiddish were spoken (see the map on p. 1023 here), ɔu was retained for cholam (the Yekkish au for vowel 54). In the intermediate areas ɒj was used (the Böhmen/Mähren/Ungarn ay for vowel 54). However, the speakers of Central Eastern and Southeastern Yiddish merged vowel 42/44/54 and created ɔj (the Galizianer oy), the thing you asked, which is also reflected in the current standard Yiddish orthography. On the other hand, the Northeastern dialect merged 22/24/42/44 (see p. 50), so for both tzeirei and cholam they used the same vowel (the Litvish ey).

For further questions – in this particular case – consult your local linguist.

This phenomenon appears to be related to the fact that, at least in most Yiddish dialects, the cholem is almost always followed by a yud (except where the word is, e.g., of Hebrew origin, in which case it is still generally pronounced as if followed by a yud). Considering that the communities who developed this pronunciation were exiled to specific European countries during specific (e.g. early Medieval) periods of European linguisitic development, it seems reasonable to speculate that the Yiddish (and correspondingly, the Hebrew) pronunciation was influenced by the phonemes used by the surrounding natives.

Perhaps at some point during the development of Yiddish, in European language(s) of the countries where the Jewish people were living, there was little use of the "o" sound except as an "oy". As such, Yiddish may have developed to automatically conjoin the cholem and yud "וי". This seems to have spilled over into Hebrew pronunciation as well.

Not the answer you're looking for? Browse other questions tagged minhag ashkenazi pronunciation provenance .

3
Intentionally mispronouncing lashon hakodesh in religious services
2
Origin of the Ashkenazi Pronunciation?
1
How do the Israeli Ultra-Yeshivish and Briskers pronounce resh and cholam when they daven and during Torah readings?

13
Disparity between male and female pronunciation of Cholam
9
Does one need dry hands before washing?
5
Hebrew Pronunciation- Sephardic Ashkenaz
2
Pronouncing the Cholam like a Tzeirei
5
Are you yotzei through accented pronunciation?
3
What is the idea of "seudas predeh" (Goodbye Party) and where does it come from?
3
Why is a patach chet at the end of the word pronounced "sdrawkcab" (backwards)?
3
Yeshayahu 40:31: Where does "vekovei" come from?