Why does the Targum switch the order when identifying Memuchan and Hasach?

Targum on Esther identifies Memuchan as Haman (in 1:16):

Yet on 4:5, when he identifies Hasach as Daniel, he switches the order:

Daniel, who is called Hasach

(In the subsequent verses in each part of the Megillah, the Targum consistently uses the names in the Megillah.)

Why is it that in 1:16, he starts off with the name used in the Megillah and identifies who it is only after, while in 4:5, he gives the character's actual name and then refers to him as the Megillah does? Why not, in 4:5, say התך הוא דניאל, or in 1:16 המן דמתקרי ממוכן?

Perhaps since Memuchan and Haman are both in the Megillah, we identify one as the other "Memuchan hu Haman".

However, when we want to identify Hasach as Daniel, who doesn't appear elsewhere in the Megillah, we note that Daniel is called Hasach, but we can't say that Hasach is Daniel, because Daniel is not present in the Megillah, so it would be awkward to say Hasach hu Daniel. ??

In Targum Rishon of Esther 1:16, the character "Memuchan" is Haman the Agagite, whose name keeps reappearing from this point forward throughout the narrative (except in 1:12 where his name of "Memuchan" is mentioned yet one last time).

In Targum Rishon of Esther 4:5 "Hasach" appears, who is Daniel the prophet. The narrative continues to refer to him as "Hasach" several times, until in 4:12 he is killed by Haman, and the reader is once again explicitly reminded in the Targum that this person was in fact Daniel the prophet.

According to the Babylonian Talmud, the emphasis on Daniel's name "Hasach" stemmed for two reasons: (a) the name "Hasach" means cut down (killed by Haman); and (b), the name also means decided, which meant that Daniel's words (prophecy) had carried cosmic force. 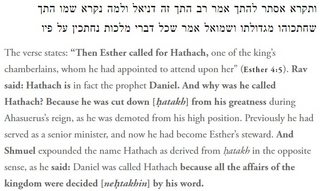 Please click on the image (above) to enlarge and view online.

The same commentary appears in the relevant Midrash.

In summary, the emphasis on the name "Hasach" for Daniel in the narrative was to focus the reader on the humility ("cut down") and greatness of Daniel the prophet, whose words carried divine sanction and power ("he made decisions on affairs of state").

IMHO, The first name is the main name, the second is a nickname.

With Daniel, it's obvious.

With Haman, it seems that researchers believe that "Haman" is some kind of title or virtue's that is attached to the person.

Especially I remember scholar saying that Haman means "(owner of) good thoughts", which make the verse

"When she (Ester) came before the king, [he] said with the book, the bad thought he thought upon the Jews will return on his head, and they hang him and his sons"

Not the answer you're looking for? Browse other questions tagged names megillat-esther targumin haman daniel-the-person .

4
Where is Moshe in the Torah?

3
Memuchan, Hasach, Daniel
11
Why not "Where is Achashverosh in the Torah"?
6
How could Haman see Gd's face and live?
6
Charbonah related to destruction?
2
Why did Memuchan make the decree on all women?
5
Why don't we refer to Esther by her Hebrew name?
2
is there some significance in their relationship between Haman and Daniel?
4
Why do English translations use the name "Eve" rather than "Chava"?
5
Why is Daniel called Memuchan?