Purim Torah questions are on-topic only once a year, and will be closed after Purim. For details, see: Purim Torah policy

Would a person be permitted to see the new OTD documentary Locked in the Temple? 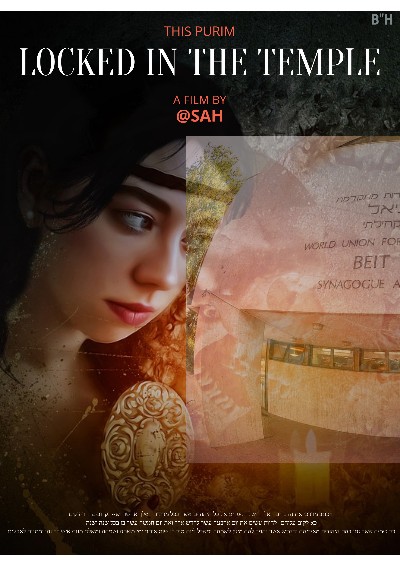 Here is an article I found on it:

"Locked in the Temple" tells the story of Melanie Hirsch, an OTD from the Reform movement, and her daring escape from a culture of "randomness, boringness and annoyingness":

"Since my bat mitzvah, I had always thought about leaving Reform," says Ms Hirsch, standing at the stove of her Brooklyn apartment in clogs and a housedress, skillfully cutting the snout off a cured pig. "But my parents had brought me up in it, and I didn't know anything else. I thought the tediousness and arbitrtariness, and the fact that it was a waste of time, were just common traits of all religion."

It took a year in college, and a stint as bookkeeper for the Secular Freedom Alliance of Sacramento (SFAS), for Melanie to realize that not only were some people not Reform, but they were not in any organized religion at all: "I suddenly realized that I could just stay home on Saturday morning and watch TV, and no one would arrest me for not going to the synagogue. I hadn't put that together before."

Once she did, Melanie watched the fall seasons of no fewer than thirty-six of her favorite shows, sometimes staying up late into Sunday morning to finish watching all the shows she had recorded to DVR. "It was so liberating," Melanie said. "I didn't only watch 'my' shows -- I discovered new ones. Dance Moms and Jerry Springer -- and that channel that advertises timeshares." In addition to buying a timeshare, Melanie gained thirty pounds and "enjoyed every bite" because of a lingering belief from organized religion that "calories don't count" on Saturday. "Plus, it was delicious," she adds.

This and other bizarre beliefs were replaced by a new lease on life she calls the "Live until you die" approach: "It's basically that while people are alive, they're alive, and nothing can change that. So they might as well do whatever, because of the thing I just said, you know?" Melanie explains thoughtfully, sliding the twined and trussed pig into the oven. "It just makes a lot of sense when you think about it."

==A CULTURE OF CONFUSION==

Injury. Loss of money. Severe, even debilitating illness (nisht gedacht). These are just some of the ordeals faced by the members of the Reform Jewish movement. Increasing numbers of disillusioned former members link these disasters to the "contradictory and frankly confusing" faith which they are encouraged by the Movement to adopt.

"You are required to believe in this thing they call the 'G-d-idea,'" reports former member Amy Smith. "It doesn't make sense. No one even knows what those words mean."

"We sometimes had to say long, complicated prayers that referred to arcane rituals like animal sacrifice," describes an ex-member, Tim, who now suffers from occasional "bizarre dreams in which his own pets are being sacrificed." Tim sees a therapist, but "[The dreams] just won't go away. One night I dreamed it was my goldfish. Several months later I dreamed it was my sister's pet hamster--a gerbil, really."

That confusion reflects the state of mind of many Reform members. "For some reason, in the Reform temple, we were always hearing about Gandhi," said‎ Hirsch. "It had to do with world peace or something. But, I mean, was he even Jewish?" Hirsch shakes her head. "And then there's Martin Luther King."

"Some of the stuff seemed pretty made up," muses Smith.

Children of serious members of the Movement are coerced into attending a so-called "Hebrew School" two afternoons a week. They are forced to learn to chant and sometimes read in an abstruse language said to be used in religious rituals from the ancient world. Many report educational and personal trauma as a result of this experience. "I was bored, so bored, all the time," said one ex-member, who wishes to remain anonymous. He grimaces and adds, "I never, ever, ever want to go back to that place."

The last straw for Melanie was when a bus hit her. She knew then that not only was her belief system limiting -- it was also ineffective.

"I came face to face with the harsh reality that 'having faith' was not actually going to save me from life's worst trials," reports Melanie tearfully. "I just couldn't do it anymore. I had to give it up."

Initially, Melanie's mentors tried to discourage her from leaving the movement. "Melanie paid us over two thousand dollars a year in membership dues-not including the High Holiday services and Hebrew School for the kids," explains the shul's director, Rabbi Christine O'Donnell. "She was like a mother to us, financially." Many high-ranking congregation members tried to force Melanie to stay, bribing her with aliyot to the Torah and promises of "substantially subsidized" trips to Israel. But eventually they realized she would not be deterred from leaving the movement, and gave up.

"I just wasn't worth it to them," Melanie confides, sobbing. "It's like people don't care if you stay or if you go. They think you'll be fine without the Reform Movement." She shakes her head pensively. "In that case, what's the point?"

=="FROM DISAPPOINTMENT TO HOPE"==

What indeed? Melanie describes her journey making the documentary as a "rising from the ashes" of her years in the Reform Movement. "Making the movie really let me see the space I had been in for the really fake place that it was," she explains. She reveals that she is thinking of becoming Chareidi: "Chasidic or one of the great Lithuanian rabbinical dynasties--the real deal." She smiles mysteriously and adds, "I've always wanted to study kabbalah."

Since her transition out of Reform, Melanie is more optimistic about life. "Now, I have a sense of self and of the future," she discloses. "I feel happy every day. I realized that even though the bus hit me, I can never really be down, because it's the road that matters, not the bus."

Next on Melanie's calendar? Purim. "I love, love, love Purim," says Melanie. "All the parties. All the costumes. And the hamentaschen--oh, the hamentaschen! Even Reform could not mess it up." She pours herself a l'chaim. "After all, a Jew is still a Jew, and joy is still joy!" We'll drink to that more than once.

Locked in the Temple comes out in wide release on February 28.

TL;DR: Here at Mi Yodeya we love all Jews, even Reform. No, really! And that documentary doesn't exist, but this one does, and learning Torah is the best entertainment!

Send a DVD copy to your friend as Mishloach Minus. Of course if they graciously decline it ... it looks like the halacha says you'd get the mitzva only if they were actually flattered by your attempted gift. Would that be the case here? Ask your local non-Orthodox documentary consumer ...

This documentary is missing hundreds of references to Tikkun Olam; there is no way without a reference to Tikkun Olam every 18 seconds this can constitute an accurate portrait of life as a Reform Jew (I say this with much affection for both the Reform movement and its members). If the phrase "Tikkun Olam" were mentioned enough times in the film, it would be roughly every third phrase in the description, but it is not mentioned a single time! As such, the documentary appears to be lashan horah and therefore not permitted for b'nai torah