Is Rabbeinu Tam correct about unique phraseology for specific amoraim?

In Kesubos 2b there is a discussion in which an answer is introduced with the phrase פשיט רב אחאי – R. Achai answered.

There is a discussion in Tosafos as to the identity of R. Achai. Rashbam claims that this is R. Achai Gaon, the author of the Sheiltos, and because he lived after all the amoraim he always has a different word associated with him such as פריך רב אחאי or פשיט רב אחאי.

Rabbeinu Tam rejects the view of Rashbam, and offers a different reason for the unique words associated with R. Achai. He asserts that every amora had their own unique words so the fact that R. Achai also had unique words does not indicate that he was not a regular amora. Rabbeinu Tam provides three examples of words unique to specific amoraim 1) מגדף בה ר' אבהו (3 תהי בה ר' יוחנן (2 לייט עלה אביי.

The question is: is all this talk about unique words actually true?

However, פשיט is only used once in reference to R. Achai (our case under discussion), while it is used on several occasions for other amoraim (though granted not in the precise format of פשיט רב פלוני).

While תהי בה is indeed used for R. Yochanan more often than for other amoraim (Kesubos 107b, Kiddushin 55b, Bava Kamma 112b, Bava Basra 39a, Bechoros 42b,) it is still used for a whole bunch of amoraim, such as R. Zera (Berachos 38b), Reish Lakish (Zevachim 13b), R. Elazar (Eruvin 66a, Bava Kamma 76b), such that it is a bit of a stretch to call it R. Yochanan's unique lashon. In fact, in the parallel passage in Tosafos HaRosh one of the examples given of unique words is תהי בה ר' זירא!

Similarly, the term לייט עלה is used primarily for Abbaye (Berachos 29a, Shabbos 120b, Pesachim 104a, Taanis 29b, Moed Katan 12b, Kiddushin 33b) but it is also used for Rav (Shabbos 120b). If we include other variations (such as לייט אמאן) we can include several others as well (e.g. R. Yehoshua Ben Levi, R. Chisda).

Furthermore, the phrasing employed by Rabbeinu Tam וכל אמורא היה תופס לשונו implies that each amora chose his unique word. However, the unique words in question are all verbs describing actions taken by the amoraim. Therefore the amoraim were not using these words themselves; rather, the redactors of the Talmud chose to use certain words to describe the actions of certain amoraim.

If we grant that it was the redactors that chose the unique words we have another problem: if, in accordance with the theory of Rabbeinu Tam, these unique words were used deliberately for specific amoraim, why did the redactors sabotage their goal by also using the same words for other amoraim once in a while?

(I have not found any subsequent sources that deal with this issue.)

(I am prepared for all of the downvotes this might get me...)

In my understanding of Rabbeinu Tam, this is a non-issue. Rabbeinu Tam rejects Rashbam's opinion because Rav Ashi answers Rav Achai in Kesubos. Finished.

Once that is the case, Rabbeinu Tam must come up with some explanation as to why Rav Achai always appears using the terms of Parich/Pashit. To this, Rabbeinu Tam notes that it is common among some Amoraim that they often appear "linked" to a particular wording (regardless of whether or not this was by their design or by the design of whatever redactors had added), such as לייט עלה, מגדף בה, etc. It's not that Rabbeinu Tam is stating a rule that particular Leshonos are unique to an Amora, but rather, Rabbeinu Tam is simply providing a framework within which having an Amora (i.e. Rav Achai) use the same Lashon (i.e. Parich) many of the times that he appears in Talmud Bavli is not a big problem that needs to be explained.

Note that due to to the number of other places in Shas (thank you Robev for Kesubos 10a!, see also Chulin 59b, Bechoros 5a) where Rav Achai is mentioned or speaks without "Parich" or "Pashit", I believe that Rashbam must hold that that there was also an Amora named Rav Achai, whereas for Rabbeinu Tam, this is just like any of the Amoraim mentioned above.

Therefore, Rabbeinu Tam is correct in this assertion. This is also why it is inconsequential that Tosfos HaRosh change an Amora, and that exceptions appear for all of these.

Edit: I found this discussed here (Sefer Lev Shomea by Chaim Hakohen of Tripoli). He quotes Zvi Hirsch Chajes to Nazir 51b, who says that Rabbeinu Tam clearly did not intend to note that these Leshonos were unique to a particular Amora, but simply that a specific Amora often "used" one in particular. Hopefully this helps support my case.

Edit 2: This also seems to be what Rabbeinu Tam is saying, based on the wording of Tosfos Harosh there (thanks Alex!), who makes it seem much lighter, and no "rule" of "Amora Tofes Leshono":

The author of Sheilas Shalom on Sheiltos gives this issue an adequate dissertation. He establishes Rashbam’s opinion that this is indeed the Rav Achai of the Savorai, which was added in after the sealing of the Talmud. He deflects Rabeinu Tams logic (cf. Tosafos, Zevachim 102b, s.v. parich) by pointing out that the same order is found in Nidah (33a), where Rav Asi, an earlier figure, also answers Rav Achai’s question. He explains based on Tosafos (Chulin, s.v. anah) that the question was already asked in the earlier Amoraic times, but it was also asked later by Rav Achai. Read further for more discussion.

Rabeinu Tam’s rule is thus no longer valid, because the only reason that Rav Achai has his own word is indeed because it was added in later, as Rashbam notes.

As far as the rule then stated regarding specific phraseology among Amoraic statements, it is possible to now decrease the intensity in which Rabeinu Tam was quoted, and to say that he was only quoting analogous examples to explain his position on Rav Achai. However, he would perhaps concede. 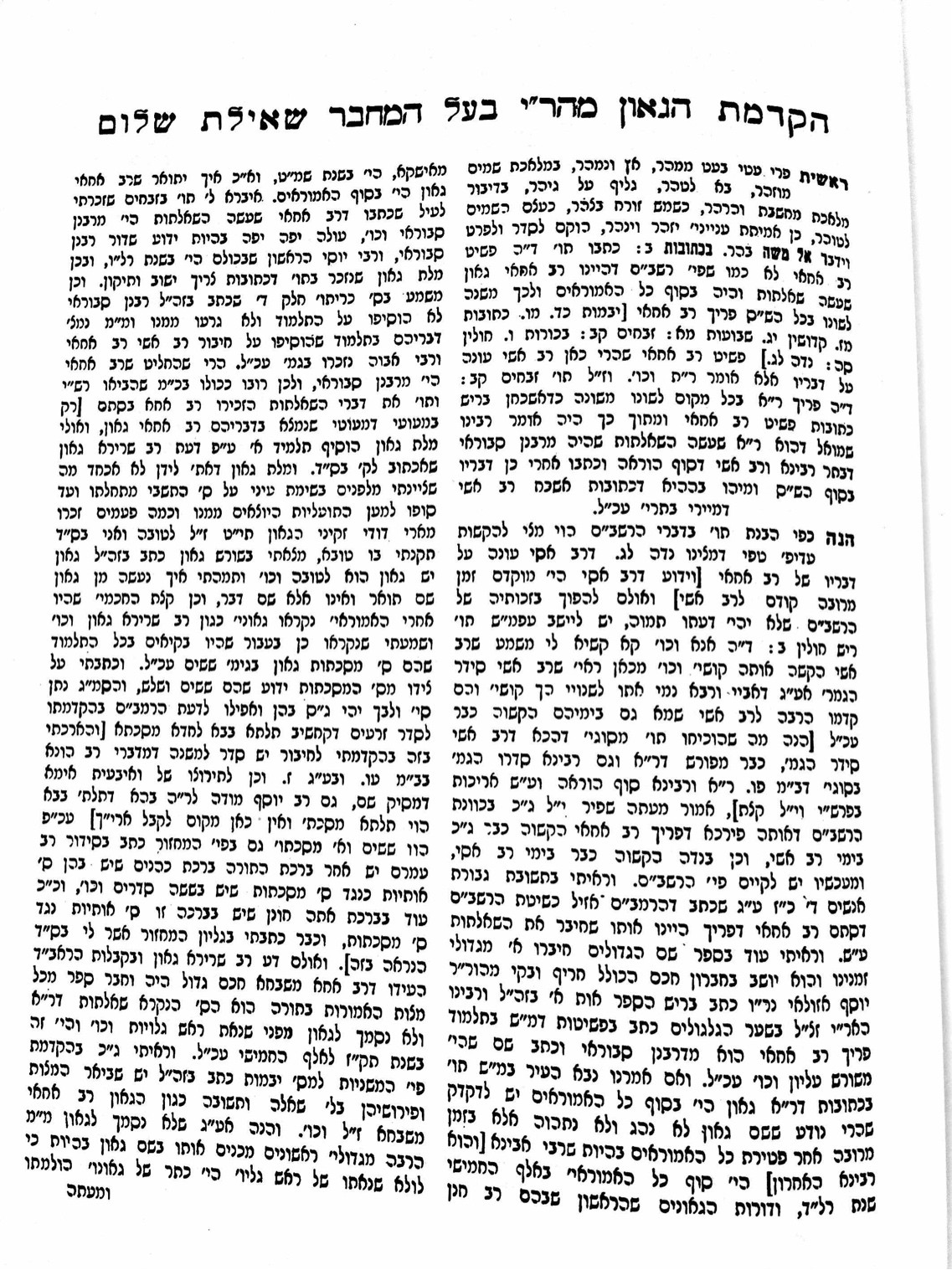 Not the answer you're looking for? Browse other questions tagged words talmud-gemara tosfot amoroim maseches-kesubos .

1
Why is Rebbi Meir frequently quoted as "he used to say" in the Talmud?

11
Are there unnecessary words in torah?
5
Source for Gemara about Gedalia
11
Amoraim unique to Masechtas
5
Mekor for R' Haim on Tannaim vs Amoraim
4
Who is HaRam in Tosafos
2
Majority of Poskim like Rabbeinu Tam?
4
Why would I have thought that healing contradicts the will of Hashem?
7
Are there examples of Tanaim, Amoraim,Rishonim, Achronim using secular sources for Limud Torah?
1
Why is Rebbi Meir frequently quoted as "he used to say" in the Talmud?
2
Source for Gemara about learning while sitting on hands?