Ask Question
Asked 2 years ago
Active 1 year, 11 months ago
Viewed 266 times
4
Closed. This question is off-topic. It is not currently accepting answers.

I'm starting to get the feeling that Frogs are one of the animals that the Dor Haflaga was turned into (I think this might be a Medrash.) My reasoning is: First if all we see that they jumped into the ovens for kiddush H-Shem (I think this might also be a Medrash) and second they're always bringing up the laws of Ribbis (Ribbit, Ribbit:)

Am I correct in my assumption? 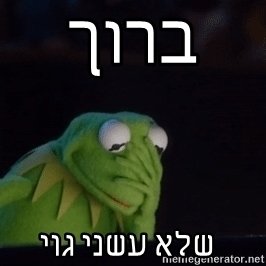 Although Kermit the Frog is obviously an Ashkenazi, most frogs are called צפרדע and are Sephardic. They hold by the great modern posek R'Dovid Ribiat, an expert on yichud and hilchos Shabbos.

It is moreover not a coincidence that the Maharal of Frog was a Jew, nor that he built a statue looking distinctly like an anthropomorphized frog, which saved the Jews of Frog.

Frogs are some of the oldest animals on Earth. A scientist might tell you that they existed 200 million years ago, back when there was only one continent and many dinosaurs. A scientist might go on to say that they survived numerous calamities including an asteroid which destroyed three-quarters of the life on Earth. And B"H, they go on living to this day -- more numerous and more ascendant than ever in the wake of all that tragedy. Sound like anyone else?

The Egyptians hit frogs, but they did not go away. The more you hit them, the more they came back. They kept on multiplying until they took over the whole land with their unique frogginess. Then and now--like Jews, B"H--frogs just kept on living and serving G-d.

Serving G-d?! We learn in the midrash that the frog is the only creature to sing as beautifully as King David. / A great talmid chochom in the time of the Baal Shem Tov was reincarnated as a frog. This frog then came to experience klos hanefesh. / In Perek Shirah, we learn that the frog's song is "Baruch Shem K'Vod Malchuso L'Olam Voed."

Surviving, thriving, and serving G-d despite long odds: the frog is, if not a Jew, Jew-ish indeed.