The Torah says (Exodus 21:24) עין תחת עין, an eye for an eye, which is understood to mean ממון, monetary compensation.

I saw this remez by the Rokeach (here, result #2) and don't understand it:

The verse has twelve words, and a person can recite them without moving their lips. This tells us not to say "eye for an eye" is literal; rather monetary compensation

While what he says may be true (yet difficult to accomplish), I don't understand the jump that therefore it must mean monetary compensation. Where did that inference come from?

My own admittedly creative theory:

Mammon, money, is conceptually potential - money as money does not have a use, it is only useful for its ability to get you something else - its potential to be exchanged. (R' Moshe Shapiro Zt"l had a lot to say about this, but it's not for this short suggestion post.)

(I am aware that many Rishonim interpret the concept of עקימת שפתיו הויא כמעשה much more restrictively, but for a remez I am not as concerned about that.)

Here's my take on it:

(Firstly, the idea of not having Nidnud Sefasaim refers to that it doesn't include any of B, V, M, P/F which require use of the lips to say. See here, for example, for a source that says this.)

I think that the idea that Rokeach is trying to get across is that since this does not require lip movement to read, is a remez that the "literal Passuk" is not read for judgement. Rather, there is a "silent", non-literal interpretation, which is that one pays instead.

I got this understanding from "לומר שאין לומר עין תחת עין ממש", which would loosely translate to "To say that one should not say Ayin Tachas Ayin literally".

Don’t articulate the words, rather read with your eyes the letters that are under/תחת (in the alphabet sequence) עין:

(This remez is attributed to R. Shimshon of Ostropoli (and others after him), but in light of this piece by Rokeach he could have been the first source.)

This was a fun question and the key to understanding what the Rokeach writes is to follow the key to his approximately 50 types of textual analysis listed in the beginning of volume one (the section on Sefer Bereshit) of his commentary.

As is indicated at the beginning of parshat Mishpatim, his analysis here is through the Sha'ar Smuchim and that is how to follow what he is saying. 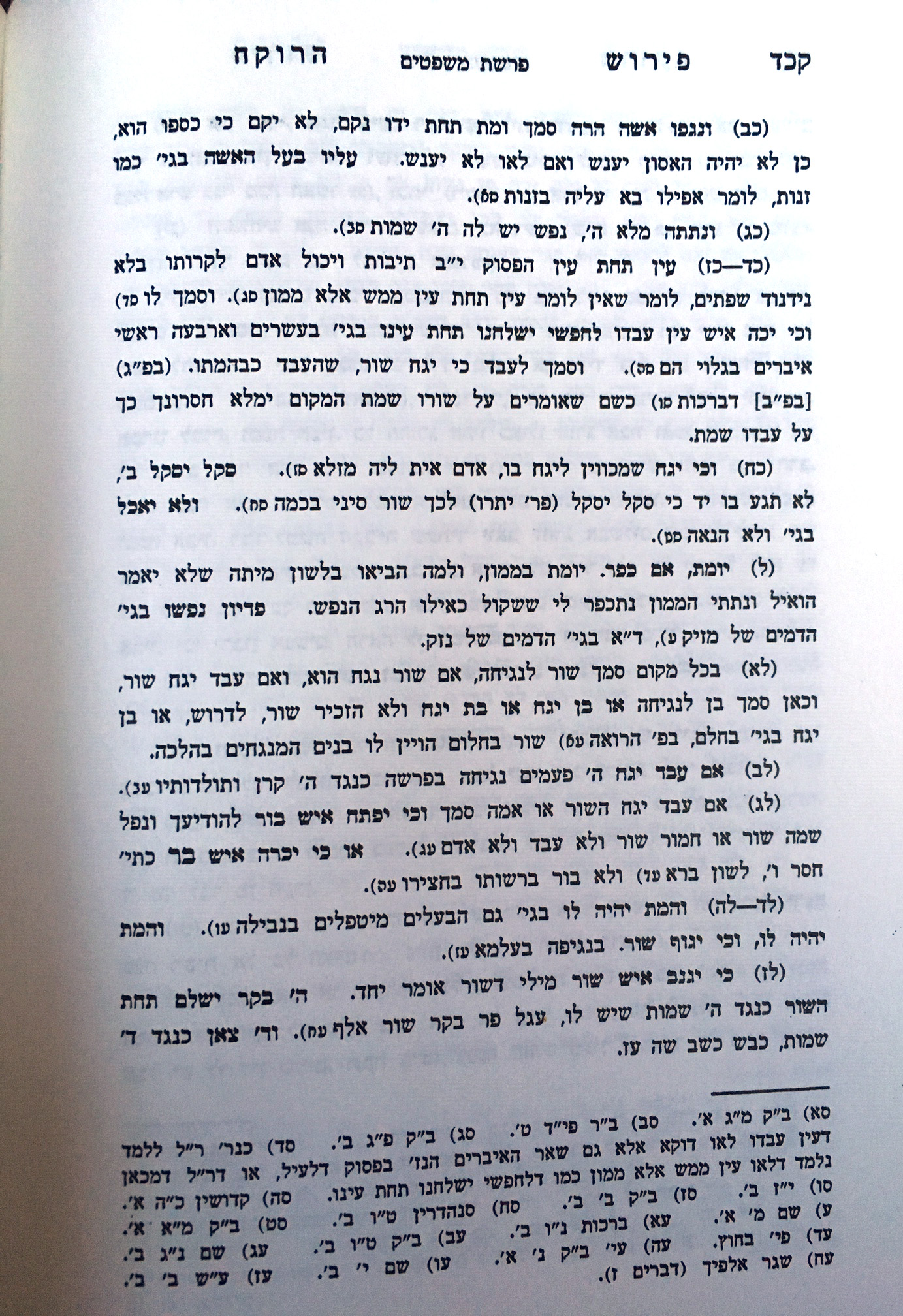 His comment about not moving your lips is not central to the meaning he discusses and does not conform to the paradigm of Semicha he uses.

In that context, his comment that lips don't move when saying the twelve words of Shemot 21:24 is as @Yez suggests. It is a hint that those words are not being taken literally because it doesn't fall into the definition of true speech (that speech, which involves moving the lips is a small action מעשה קטנה) because the lips don't move.

This is also observed with the distinction between Shemot 21:23, which addresses when you cause someones death, and 21:24, which deals with injuries. 21:23 does involve moving the lips to pronounce Nefesh, which in context, would suggest financial compensation is not appropriate for killing someone. It should be taken literally.

The primary teaching by the Rokeach on this posuk is preceded by the word "וסמך" which is in two places. That the associated posukim explain what the true meaning of Shemot 21:24 is.

Verse 21:26-27 emphasizes that compensation is not literal (meaning you forfeit your actual eye for causing the loss of someone else eye). The injured party (in this case a servant) is freed.

The Rokeach's second semicha involves when someones agent, in this case a servant, kills someone. The Rokeach is saying that ones servant is equated with their ox (like Shemot 21:28). So like in the case with the ox, the owner of the ox is only responsible for financial compensation, not forfeit their own life.

Not the answer you're looking for? Browse other questions tagged parshanut-torah-comment torts-damages mishpatim .