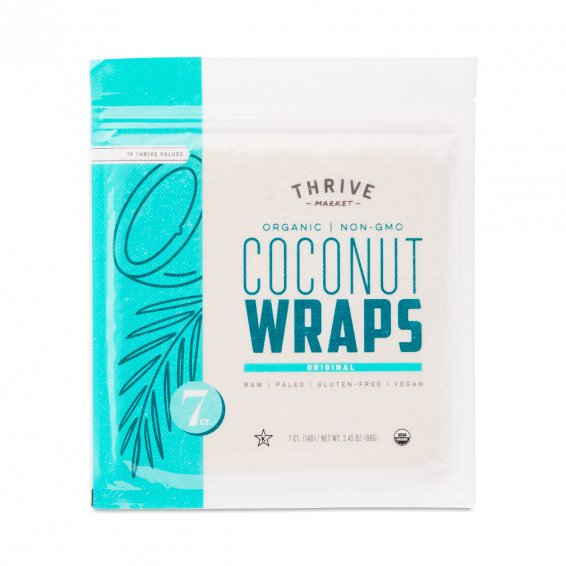 Provided it is not eaten as secondary (tafel) to another, more significant food (in which case it would not merit its own blessing), and assuming the meat is broken up beyond recognition as coconut (as seems to be the case in, e.g., this recipe), it would seem that, according to at least most Ashkenazic authorities, the bracha should be shehakol. For a similar ruling regarding applesauce, see, e.g. here:

Apple Sauce | Shehakol | Borei Nefashot | Shehakol is to be said if the apples are totally pureed. This applies mostly to commercially available canned or bottled apple sauce. However, Ha-aytz applies for homemade apple sauce where the applesauce is chunky.

However, according to many rabbinic opinions the correct blessing is actually haeitz or even ha'adama. See, e.g., Halachipedia's article on the topic:

The Gemara Brachot 38a concludes that the Bracha for Tarima (processed dates) is HaEtz because the actual fruit remains. Rashi (D”H Tarima) explains that Tarima is dates which were crushed but not pulverized. However, Rambam (Brachot 8:4) explains that even if one removed the pits and crushed it and kneaded it into a dough the Bracha would still be HaEtz. The S”A 202:7 rules like the Rambam and the Rama rules like Rashi. Yalkut Yosef 202:22 and Halacha Brurah 202:25 rule like Shulchan Aruch, that even if the fruit or vegetable is completely pulverized, the Bracha does not change.

The Mishna Brurah 208:42 concludes that whenever the fruit is recognizable (because of the form and texture) the Bracha would be like the fruit, however, when it’s so processed that it’s not recognizable the bracha is Shehakol. Vezot HaBracha (pg 100, chapter 12) and Veten Bracha (Halachos of Brochos by Rabbi Bodner pg 403-4, chapter 22) agree.

However, the Laws of Brachos (Rabbi Forst, pg 303-5) explains the Mishna Brurah as saying that even for an unrecognizable pulp one should make the bracha of the original fruit. Only something which completely lost it's solid form is shehakol. He therefore writes that apple sauce is HaEtz, and mashed potatoes and peanut butter are HaAdama.

Rabbi Hershel Schachter in Brachot Ha'nehenin (31:15) quotes an alternative approach from Rabbi Soloveitchik; Rosh (Brachot 6:18) writes that for the Bracha of Ha'adama, it is unnecessary for the vegetable to be recognizable. For example, the Bracha for a vegetable broth would be Ha'adama, even though the vegetables were strained out. However, he is unsure if the same rule applies to strained fruit soup. Therefore, Rabbi Soloveitchik felt that it would be preferable to recite Ha'adama on mashed fruits - like applesauce - since Ha'adama is more specific than Shehakol, and Ha'adama doesn't require tzurat ha'pri. Likewise, the Bracha for mashed vegetables would remain Ha'adama. Rabbi Schachter personally follows this opinion (See OU Document X-18 and HalachaDoc LG-A9).

According to all authorities, the blessing after eating an olive-sized amount in the requisite time would be borei nefashot.

Since the ingredients to these coconut wraps are:

I believe the bracha would be ha'eitz which would make the bracha afterwards borei nefashos.

See here where you can see that the bracha on coconut meat including shredded coconut is ha'eitz.

Not the answer you're looking for? Browse other questions tagged halacha blessing food fruits .

8
Bracha on Food for Life Ezekiel 4:9 Sprouted Grain Bread
5
What bracha is made on Seaweed?
5
Does extra virgin organic coconut oil have to have a hechsher?
1
Making a bracha on kosher ingredients cooked in non-kosher pots?
5
What bracha do you make on veggie straws?
7
What is the blessing on dark chocolate?
4
What is the bracha for a petroleum-derived product?
1
Gardening produce - fertilizer with blood meal, kosher?
0
Bracha: Dried tomato Wraps
5
Blessing over a wine-water mix