Ramban and Shituf. What is his position?

The Ramban on Devarim 7:6 says:

because G-d chose you to be his treasured nation since you have no ruling officer, enforcer, or ruler among the angels. You are directly under G-d's control. Therefore don't stray and worship the idols of the other nations. I already mentioned this many times. 1

The Ramban seems to be talking about the idea that since the Jews, unlike the other nations, do not have a "patron angel". Instead, G-d himself directly rules the Jewish Nation. (as the Ramban says in Devarim 4:15) Therefore, we must only serve G-d, and not turn to idol worship.

There are some opinions that non-Jews are allowed to believe in Shituf (partnership, i.e. that there are other forces in addition to G-d who have influence over the world (see here for a discussion of this)).

Based on my understanding of the Ramban, does the Ramban then hold that the other nations may believe in Shituf, since they do have a "ruling officer, enforcer, or ruler among the angels"?

If the Ramban himself does not hold this view, are there other opinions to that use this logic to explain why non-Jews may believe in Shituf?

1 I don't know where else the Ramban has mentioned this, so perhaps he goes into this in more detail in other places, and answers my questions.

R' Yaakov Kaminetzky discuses the opinion of Ramban in his Emes LiYaakov, parshas ViEschanan 4 19 on the verse

He says there are two approaches to this passage amongst the mefarshim. Some say it means he gave the sun and moon for light, but don't worship them. Whereas Ramban and Ibn Ezra say each nation has a star and mazal which actually can have influence on the nation they are over. (He points to Ramban in Bereishis 1 18 as well.)

He continues that there is a fundamental argument at play here. Rambam famously states that no avoda zara have any power and anyone who worships them are wasting their time. Ramban and Ibn Ezra on that verse disagree. They hold that Hashem actually placed the nature in the universe and gave power to these item to influence those nations under their charge.

However, the nations are not allowed to worship these items, as that is idolatry! He explains then that the ban against idolatry for the nations is because the only power these items have is from Hashem and it is not fitting to pray or to worship them. All prayer and worship must only be directed to Hashem, the source of all this power. He does concede that if in fact they would worship and pray to their mazal, it would in fact have an effect.

He points to Ralbag who explains Yiftach's words as having been said in jest. (In accordance with Rambam, presumably.) But goes on to say that according to Ramban, his words can be explained according to their simple understanding.

The footnote on the Emes Liyaakov says the Yalkut Meam Loez in Shoftim brings this exact pshat in the name of Nefesh Yehonason. The footnote adds that this has practical halakhic ramifications and points to the Taz in Yoreh Deah 147 2 and Meshech Chochma at the end of Chukas.

That Taz is arguing on a Ramma who said

See Taz at length (and Shach quoting Bach, whom Taz said is quoting him) that the Ramma confused the intent of the Rambam etc and one may only say אלקים בעזרך not אלהיך בעזרך.

The Meshech Chochma is on the haftora. He explains the passuk in Shoftim used the phrase הוריש & not הורישך specifically because he did not want to even imply that his idol actually benefited him anything. He points to the words of the Taz to hammer in this point.

Unfortunately I could not find any Emes Liyaakov online to link. It's always worth checking inside when coming across a big chidush. Here is a picture of the page. 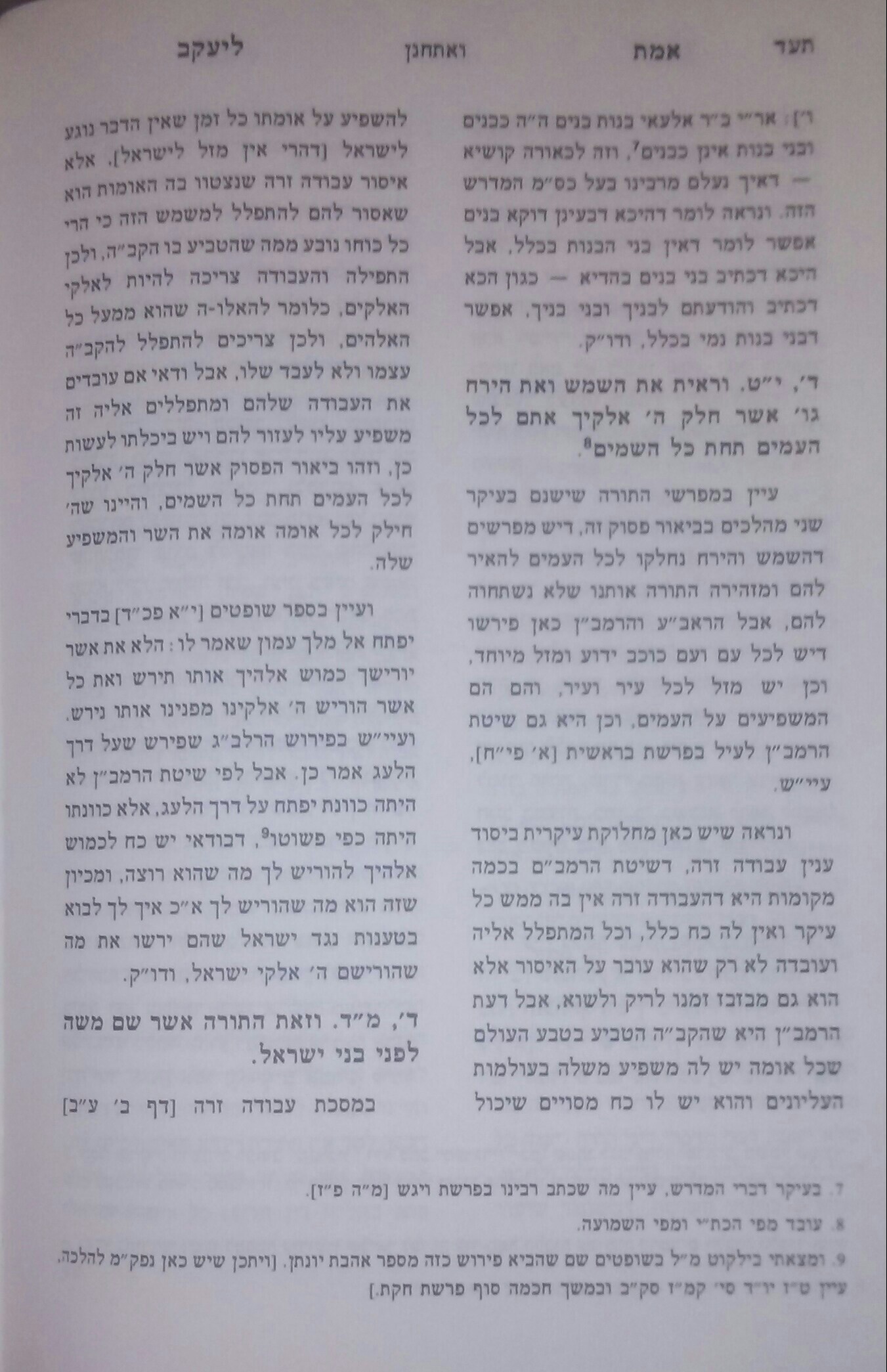 Not the answer you're looking for? Browse other questions tagged gentiles avodah-zarah vaeschanan ramban .

10
What is the exact definition of Shituf (vis a vis 'Avodah Zarah)?

10
What is the exact definition of Shituf (vis a vis 'Avodah Zarah)?
6
Shituf and Avodah Zara
2
Ramban and the generations
0
Did Ramban teach guilt offering is more important and serious than sin offering?
5
Does Judaism kill the infidels?
4
Egel Hazahav and idolatry: Ramban vs Rashi
1
Is the Arya Samaj's version of Hinduism avodah zarah?
7
Learning Ramban Al HaTorah
2
Translating Ramban on Dovid Hamelech's birth/ancestry