Explain the usage of the double zarka trope

There are 3 places in the Torah (that I know of) that have a double zarka trope note before the segol:

What does the double zarka mean grammatically, and why is it only in these places?

In a clause ending in segolta, the dichotomy is marked by a zarka, if in the first, second, or third word away from segolta. If the dichotomy occurs further away, then it is marked by revia or pashta, and then the second minor dichotomy (in the intervening clause, from that revia until the segolta) is marked by the zarka.

However, on musical grounds, if the revia or pashta is in very close proximity to the zarka, it is itself turned into a zarka. See William Wickes, A Treatise on the Accentuation of the Twenty-one So-called Prose Books, pg 87 - 88. 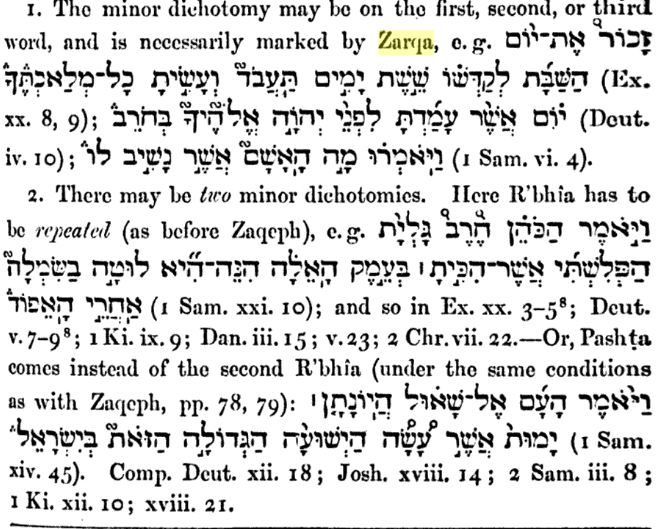 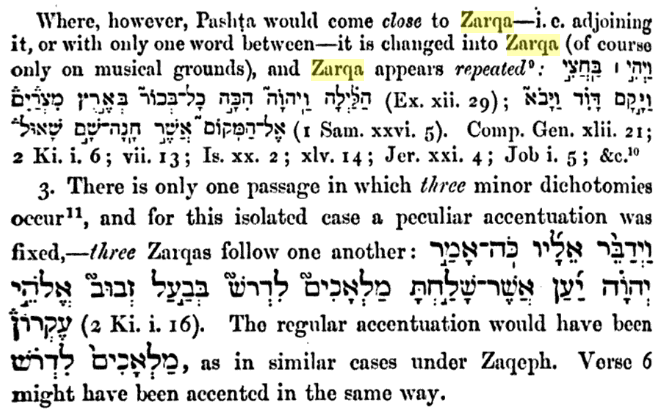 Practically, we can see what this means by taking on of the example pesukim, such as the one in Bereishit (מב,כא).

Focusing now on that first half, that is:

There are three division of this segment. The first, is the revia on אָחִ֗יו. We are dividing the "Person said to his fellow" from the actual quote. (Why this division didn't happen first and foremost, even with an etnachta, is discussed by Wickes elsewhere when he discusses the division of quoted statements.) We are then left with a clause consisting of four words, which needs to be divided up:

The division is on the word אֲבָל֮, "indeed, verily", separated from "we are guilty regarding our brother." This would be properly marked by a revia, but since it is two words from the eventual closest zarka (on אֲנַחְנוּ֮), it is itself transformed into a zarka.

Finally, "we are guilty" is divided from what they are guilty regarding, namely "our brother", by placing a zarka on אֲנַחְנוּ֮ to get:

Usually only the last Revi'i note before a Segol becomes a Zarka.

In general the note Revi'i doesn't like to be next to itself (probably a musical consideration). So if there are two in close proximity, the second one changes to a Pashta (eg. Genesis 1:7).

But when that second one is sufficiently close to the last one which is already converting to the "final form" of Zarka, it too goes ahead and assumes the "final form". (The same applies mutatis mutandis to a double Tevir before a Tipcha, such as Numbers 14:40.)

So grammatically it means nothing different than the Revi'i you might have been expecting.

Not the answer you're looking for? Browse other questions tagged trop-cantillation .

8
Search Database with Ta'amei Hamikra
2
How to read a mahpach psik?

6
Why do a few tribes in a list have different trope from the rest?
7
Why are the blessing(s) preceding the Haftarah printed and chanted with trope notes?
10
Questions regarding unusual trope combination
3
Question on trope position in Breishit (Gen.) 47:4
10
Origin, need, and purpose of “Upper” trope for reading 10 Commandments
1
Is there an online source for trope occurrences?
5
Mil'al vs. Milra on “Lamah”