Must Moshiach Ben Duvid be in direct patrilineal descent?

We know that Moshiach must descend from Duvid Hamelech (King David), traditional understanding is that it is ben acher ben (father to son 100% direct male descent).

My question is are there any sources that Moshiach doesn't have to be such a direct descendant rather just being of general descent somewhere up the line?

The Rambam seems to say in הלכות מלכים ומלחמותיהם in 11:1 that Moshiach will be one of the sons [of the sons of the son, etc.] of King David

And again in 11:4 - he refers to Moshiach as being from the House of David (i.e. the descendants of David) - and we know that this is paternal.

As to whether there are sources that argue on the Rambam....

The seffer Shaar Reuven quotes a different work, Hadar Yaakov, as stating there is in fact a disagreement if Mashiach is specifically from the male descendants of David and Shlomo, or he can also descend from a female.

This came up in the Shaar Reuvein where he is discussing the source for Rambam's statement* that Moshiach can only come from Shlomo and not another child of David. And that's were we pick up here: 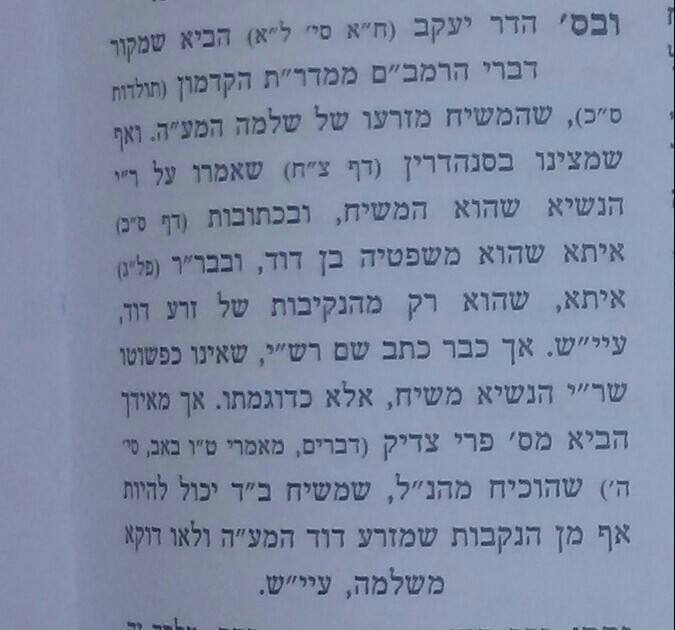 The issue is the fact that the gemara in Sanhedrin called Rabbi Yehuda Hanasi Moshiach even though we know from Kesuvos that he is only descended from the Davidic dynasty on his mother's side. Hadar Yaakov resolves this by quoting Rashi who explained that the Talmud was not saying Rabi Yehuda HaNasi was actually Moshiach, just comparable to him. According to this understanding Moshiach must be direct patrilineal descent. However Hadar Yaakov also quotes Pri Tzadik as using these very Talmudic statements to prove that Moshiach does not have to be of direct patrilineal descent, understanding the statement in Sanhedrin literally.

B"H In this article, Yehuda Shurpin explains that the Moshiach must be a direct descendant of King David through Melech Shlomo (King Solomon). Maimonides, in the preface to his commentary on the Mishnah, Sanhedrin, ch. 10. states that Moshiach will be a descendant of both David and Solomon and is part of the twelfth (of the thirteen) Jewish fundamental beliefs (as outlined by Maimonides). https://www.chabad.org/library/article_cdo/aid/1714864/jewish/Is-the-Messiah-a-Descendant-of-King-Solomon.htm "The famed 20th-century Jewish scholar and kabbalist Rabbi Reuven Margolies explains that the Zohar is careful to describe the Moshiach as being a descendant of Nathan’s wife, rather than of Nathan himself. Nathan had passed away childless, and Solomon his brother married his widow, according to the laws of yibum, levirate marriage.

In a levirate marriage, the firstborn son of the widow and the brother of the deceased is considered to be a continuation of the dead husband’s line. Therefore, Moshiach is referred to here as “offspring” of Nathan, even though he is a descendant of King Solomon."

Not the answer you're looking for? Browse other questions tagged messiah genealogy .

16
Who is Moshiach Ben Joseph and what does/did he do?
8
Which kings must Moshiach descend from?
0
Why does patrilineal descent determine who is royalty?
5
Are the Jewish people commanded to commit genocide?
6
Was the Lubavitcher Rebbe a descendant of Dovid HaMelech?
6
Are professor Daniel Boyarin's writings about the messiah supported in traditional Jewish sources?
7
Can a male convert to Judaism descended from King David potentially be Moshiach?
6
Ben David and ben Yoseph not describing the herritage
1
What is the intention of the Moshiach proofs from the Torah, brought by Rambam?