How do we know that Ben Zoma went mentally insane?

In Chagigah 14b it states that after entering pardes, Ben Zoma was injured. Rashi explains, and it is my understanding that this is the accepted reading, that Ben Zoma went crazy.

However immediately following that story Ben Zoma is posed some halachic questions which he seems to answer correctly.

Then there is a story about him describing the proximity of the upper and lower waters. I could not detect anything that indicated Ben Zoma was crazy.

Are there statements by Ben Zoma elsewhere that would show he went mentally insane or is there some other source for this idea?

The Yosef Da'as on this section has a fascinating approach.

It seems that it was obvious to everybody that Ben Zoma had (somewhat) gone out of his mind (as per Rashi) from his super-spiritual experience.

The Rabbis then tried to determine why.

It was clear to them it was a punishment for approaching the experience wrongly - the question was: where did he err?

So first they checked to see if he was too lenient in spiritual matters. I.e. Would he assume a lowly creature like a dog was not worthy of respect. So they asked him if a dog can be castrated. His correct and respectful answer - quoting a verse - showed them that this was not the problem.

Then they checked if he was too stringent - would he treat the Cohen Gadol with as more than a mere mortal. His correct approach to the second answer ruled out that problem.

It was in the 3rd instance where he erred that they realized the problem - he didn't understand that there is a very thin line between good and bad. He was of the opinion that there was "3 fingers of space" between them.

This error of not realizing that the physical and spiritual world are interconnected and have a direct influence on each other was the reason for his punishment.

This is roughly how I understand the Yosef Da'as. The original text is PDF, so I've attached a screen capture of it. 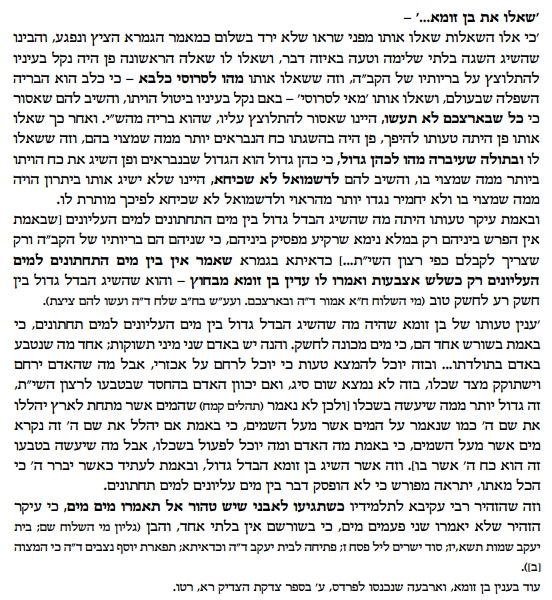 While enjoying and learning from Danny Schoemann's answer, I'd like to offer another route to understanding the idea that Ben Zoma went insane.

In describing the episode, the Talmud identifies the effect of Ben Zoma's experience in entering pardes with a particular biblical verse:

Ben Zoma glimpsed and was harmed. And with regard to him the verse states: “Have you found honey? Eat as much as is sufficient for you, lest you become full from it and vomit it” (Proverbs 25:16).

Although this is the only information given on Ben Zoma's experience, it is instructive. Rambam, misattributing the verse to Elisha ben Avuya (Aher), elaborates on the verse's allegory of sweet food to the nature of knowledge:

Though great, excellent, noble and perfect, it is injurious if not kept within bounds or not guarded properly; it is like honey which gives nourishment and is pleasant, when eaten in moderation, but is totally thrown away when eaten immoderately. ... Let thy mind only attempt things which are within human perception; for the study of things which lie beyond man's comprehension is extremely injurious. (Guide for the Perplexed, ch. 32)

The verse thus gives us an image for one possible outcome after entering pardes, that of the mind expelling what it initially received. This is why Rashi notes that Ben Zoma נטרפה דעתו . Although often translated as "lost his mind" or "went insane" (and Danny Schoemann writes "his mind was jumbled"), the phrase can also be translated, "his mind was devoured."

This understanding of Rashi would fit with Maimonides's explanation of the verse, suggesting that esoteric Torah can have an adverse effect: rather knowledge entering and filling the mind, it alternatively is responsible for the mind's harm; expelling from, or consuming, the mind. Both forms of violent food imagery suggest a person losing their knowledge, a state expectedly categorized in terms of insanity.

On a final note, it should be noted that the question of Ben Zoma's state after the pardes experience is challenging, not only because of the ambiguous terminology surrounding the discussion, but also because there are alternate accounts of the very episode in rabbinic literature. The Talmud Yerushalmi (Hagiga 2:4), for example, notes that it was Ben Azzai who was injured and Ben Zoma who died following the episode. Likewise, it may be that Rambam's version of the Talmud had a slightly different account, thereby assigning the honey verse to Aher.

The Gemara there has Rebbe Yehoshua commenting, עדיין בן זומה מבחוץ, that Ben Zoma's conclusion of the separation being three finger widths and his derivation from the word Merachefes, shows that he is still not thinking straight.

A side note: This wording, עדיין seems to show that he was recuperating. That would be the reason for the questions they asked him, to gauge his thinking or perhaps even to get him on track.

It may also be that the Gemara is mentioning these questions to show his great learning.

The Medrash Rabbah has Rebbe Yehoshua exclaiming that Ben Zoma left already and within a few days he was Niftar. Perhaps this Medrash switches Ben Azai and Ben Zoma. But regardless, we see that this was a sign that something was very off.

Something that might put better context into this is to understand the three dangers of delving very deep. First danger is getting it wrong, and on this level that would be drastic. Second, someone can grasp more than is meant for him. And finally, there is the issue of being able to relate back to this world.

Rebbe Akiva entered in peace and left in peace. This means that he grasped everything in a wholesome way and even left in peace, that he was able to relate to the basic level as well. When Rebbe Yehoshua saw that Ben Zoma said things that don't make sense to us he knew that he did not make it out safely; he could not bring out his thoughts in a way that would make sense in the basic level.

Not the answer you're looking for? Browse other questions tagged shoteh-mental-incompetent tractate-chagiga .

12
Is there positive proof that the Rambam did not accept Kabbalah?
3
How can a Minor Learn Torah from Imperfect Teachers?