Trying to find a quote of the Cheshek Shlomo

I'm trying to find the source of a quote I saw. I was reading an article about test tube beef and came across the following:

[Rabbi Menachem] Genack noted another source for viewing cultured meat as parve: A 19th century Vilna-born scholar known as the Heshek Shlomo, wrote that the meat of an animal conjured up in a magical incantation could be considered parve. It may not be too much of a stretch, then, to apply the same logic to modern genetic wizardry.

Some more googling led me to a fuller citation:

The Heshek Shlomo is Rabbi Shlomo HaKohen (1828–1905). He wrote a talmud commentary called Heshek Shlomo, and also a few volumes of shut. (He was also an editor for the Vilna Shas). I can't find a work of his that is a commentary on the Shulchan aruch. He is quoted by the Mateh Yehonatan in the Vilna SA, but I can't find the content referenced above in Siman 98.

The Chesek Shlomo(which is Rabbi Shlomo Hakohen) can be found in the back of the Shulchan Aruch (Melachim) (Kovetz Mefarshim) which has many meforshim on each siman.

Here is the text you are looking for: 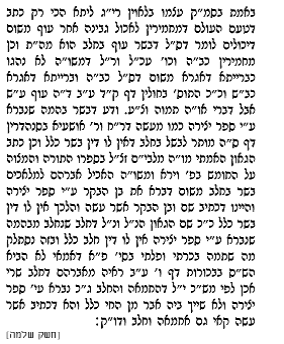 2
A quote of Shlomo ibn Gabirol
0
Rav Shlomo Wolbe and children
0
Rabbi Avigdor Miller's quote about one's face and soul
2
Whats the quote of hashem helping?
0
Where is the heichal shlomo rabbinical library today?
4
The Medrash About Shlomo HaMelech's Daughter