Why is the Frankel Rambam divided unusually? Madda-Ahava and Avoda-Korbanot

The printing of Rambam's Mishneh Torah by Hotza'at Shabsi Frankel was a revolutionary achievement. The publishers searched the globe for the earliest and most authoritative manuscripts and attempted to achieve the most reliable version of the text. They also compiled what is called the Mafteach, a cross-referencing index of any mention of the Rambam, or it’s “Nosei Keilim”, in thousands of ancient and contemporary seforim.

Another alternative element of the printing of this set is the unusual breakdown of the volumes. The Mishneh Torah is comprised of fourteen books, and the Frankel Rambam reproduces it as such. However, instead of numbering the books 1-14 (or א through יד, in this case), they refer to Madda as א* and Ahava as א**. Then they continue a standard numbering sequence through ו, at which point we find Avoda as ז* followed by Korbanot as ז**. Thus, although there are fourteen volumes in the set, the numbering only reaches 12, יב. We are led to believe that Madda-Ahava and Avoda-Korbanot are somehow unified sections. (see the picture in the link above)

Why is the Frankel Rambam divided the way it is? Why did the publishers choose to number the volumes in this counter-intuitive fashion? Is there any grounds to suggest some innate connection between those volumes - and if so, why was it never done before? 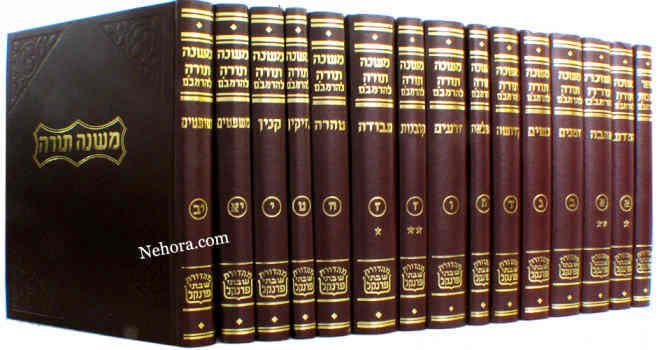 I wrote to Hotzaat Shabsi Frankel with this inquiry, and they responded that the unusual numbering is due to a misguided guess at how many volumes the set would ultimately be:

Thanks for your inquiry. Yes, it is because of the order in which it was published, and the expectations of how many volumes we would end up with. At the end there were more volumes then originally expected. We will in the future correct this issue.

So since they didn't publish the Mishneh Torah in order but rather jumped around, the miscalculated how much space each Sefer would take up, and so they had to adapt as things developed.

When they originally planned out the numbering, they expected to only need one volume each for those works, and they therefore numbered accordingly. Subsequently, the works improved dramatically in quality and research (as more talmidei chachamim became involved), resulting, e.g. in longer maftechoth in the backs of the later volumes. This resulted in the need for separate devoted volumes and an unusual numbering system.

Not the answer you're looking for? Browse other questions tagged rambam writing-printing publications .

23
Why are there colored splotches on the pages on many Jewish texts?
0
Rambam and Eliyahu Hanavi and Mosiach
4
Why does the Rambam change language?
4
Rambam and altering brachot
3
In RAMBAM hilchot avoda zara 9:4 What publisher or translator first changed notzrim to canaanites?
1
The Rambam' s drawing of the menorah
0
Rambam and Chazal