In the Koren siddur, in the readings on korbanot before Shacharit (pp. 46–47 in the Hebrew/English siddur), there is the following passage:

It was taught, Rabbi Nathan says: While [the ketoret] was being ground, another would say, "Grind well, well grind," because the [rhythmic] sound is good for spices.

This is from a whole section on the ketoret that is cited no more specifically than "Keritot 6a". I want to know the most precise possible way to cite this specific excerpt. The problem is that I can't find it on that daf.

Now, I don't actually have a physical copy to look at. I was hoping I would find it on Sefaria, but I can't find any of these words on their page for Keritot 6a. I managed to get close on 6b, but it's still not the whole passage.

Can somebody tell me exactly what Koren is quoting here and where I can find it in context?

Edit 2/14: Yaacov's answer is noted, and I have sent a link to this thread to Koren to see if we can get some detailed info.

Edit 2/15: I got an answer from Koren. I'll post it as an answer below, but I think it could use a sanity-check from other users, since I'm new at Gemara.

The Yerushalmi Yoma, chapter 4, halacha 5 in the Gemarra brings the added idea that the sound of the voice is good for the preparation in the name of Rabban Shimon ben Gamliel.

That detail is brought in Bavli in the name of Mar from the support of Rabbi Yochanan.

For what it's worth, I don't see any source (Bavli, Yerushalmi or Midrashim) other than the siddur which actually cites Rabbi Natan with this statement. That could suggest that either it was a variant text which ultimately wasn't used in Mishah and Gemarra or that there is a halachic midrash that no longer exists. A search of the Tosefta also comes up empty. As is known from Horayot 13b, Rabbi Natan's name was to a large extent removed from the Talmud.

A couple of interesting discoveries are that the Siddur of Rav Amram Gaon does not require the recital of the Ketoret at all in connection with the recital of the Korbanot. It follows what is found in the Avudraham that the Tamid is required and then the recital of Eizehu Makomen from Zevachim 85, followed by the baraita of Rabbi Yishmael from the beginning of Sifra. Amram Gaon includes recital of ketoret at the conclusion of shacharit and arvit but only in remembrance of the Temple. And the text he uses mentions הדק only in connection with the double grinding for Yom Kippur. There is no mention of the beneficial relationship between the voice and the spices.

The exact text including the citation of it being said in the name Rabbi Natan is found in Sefer Avodat HaKodesh by Rabbi Meir Ibn Gabbai, section 4 (Sitrei Torah), chapter 19 with the words beginning, "בעמדם תרפינה כנפיהם". I haven't had a chance to review the chapter but it begins by talking about traditions that were only passed down to the select individuals (in his words בני עליה). Rabbi Meir is a recognized early authority in kabbalah from Spain, born before the Spanish expulsion. He introduces the idea that the current exile was the consequence of violating several covenants, one of which was ceasing to follow the path indicated above. This has an implication about the kavanot associated with prayer. He points out that this is in addition to violating the path below, which means the mitzvot outlined in the Mishnah.

This indicates that a variant text was present at least among the kabbalists of Spain shortly after the Gaonim and was included in most of the later siddurim.

One of the interesting details to note about this is that this is supported by the work of Rabbi Avraham Katsch z"l, who headed Dropsie College in America. In the 1940s and 1950s, Katsch worked to try to recover many of the one of a kind, hand-written manuscripts and fragments which were in the Guensberg collection in St. Petersburg in Russia. Many of these were collected from Sephardic Jewish communities and genizas across Europe and they contained variant texts to the Mishnah not found in the Tosefta or Mechilta, and very old kabbalistic material including from Rabbi Yitzchok of Akko.

As a matter of context, the teaching of the ketoret was, according to tradition, given by the Angel of Death to Moshe Rabbeinu. It was used by Aharon, Kohen Gadol to stop the plague that resulted from the actions of Kozbi and Zimri.

Koren's PR department got the following response for me from Rabbi David Fuchs, one of Koren's liturgy experts:

The part from “אחת לשישים או לשבעים שנה” is a summary of the Gemara, and no longer a direct quote. It comes from the continuation of the sugya, on 6b: 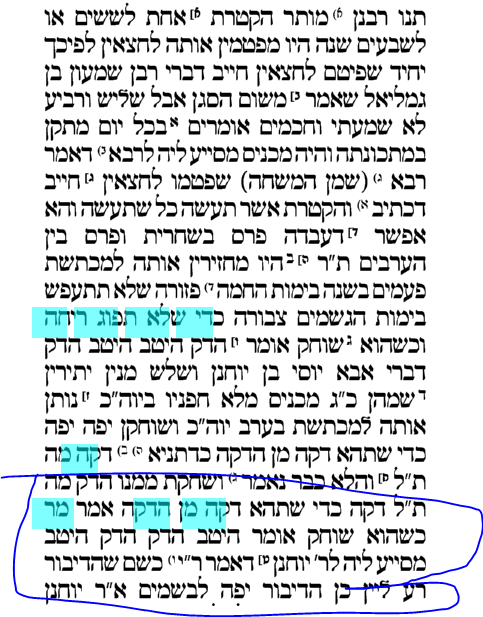 So the meaning of the passage is on 6b, continuing the sugya referring to the line on 6a, and R. Fuchs explains that the version in the siddur is a condensed summary. It sounds like I should cite the siddur, then, with a reference to this Gemara.

Not the answer you're looking for? Browse other questions tagged prayer-book talmud-bavli korbanos-ketores-prayers .

11
What is the source of the 'elu devarim' text printed in siddurim?