Wearing a Tallis for Kiddush Levana

If people wait until the end of Yom Kippur to say kiddush levana for the month of Tishrei, which I understand to be a prevalent custom, do they keep their talleisim on? Since the tallis is not supposed to be worn at night except for maariv on Yom Kippur (see, for example, here), does that mean that people should remove them before going outside? Or is it purely a matter of personal choice?

I ask because, for various reasons, I never get to say kiddush levana b'tzibbur (even motzaei yom kippur), so I actually cannot remember what I used to see happen way back in the days when this was how I said it. And then I saw this beautiful painting: 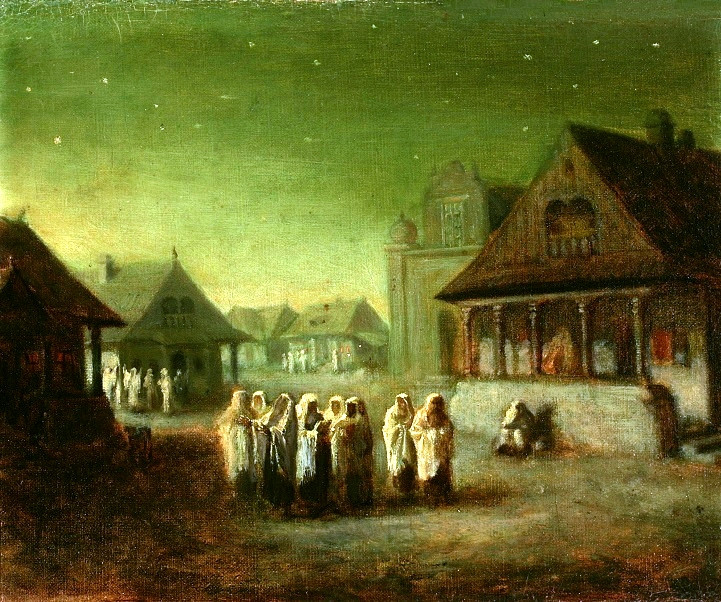 Seems to me that everybody in this painting is wearing a tallis, which leads me to suppose that it must (?) be the end of Yom Kippur.

The painting is entitled "Powrót z synagogi; Kiddusz Lewana - Poświęcenie księżyca", which (according to Google Translate) means something like "Exterior of the Synagogue. Kiddush Levana: Blessing of the Moon". It appears on Wikipedia's Kiddush Levana page.

The artist's name was Wacław Koniuszko (1854-1900). He was a Polish artist whose artworks are today exhibited in the National Museum in Warsaw. Amongst other things, he was famous for painting the Jews of Kazimierz. I do not know whether or not he, himself, was Jewish, but even if not one might assume that he painted from what he saw.

(1) Is there a custom to don a tallis for kiddush levana on any night of the year other than motzaei yom kippur?

(2) Is there a custom to keep the tallis on after davening maariv on motzaei yom kippur for the sake of kiddush levana?

(3) Or, is it all really just a matter of personal preference, and it makes no difference whether or not a person is wearing a tallis at such a time?

[Source for the idea that, normally, a person shouldn't wear a tallis by night.]

In the Mateh Ephraim סימן תרכד סעיף ד ge says to leave the Tallis and Kittel on for Kiddush Levana.

1
Why remove tallis before maariv on motzei Tisha B'av?

1
Kiddush Levana - saying certain Pesukim 3 times
6
Why does the Yom Kippur service seem to reenact Abraham's treatment of his sons?
5
Covering your head with a tallis at night - problem?
7
Kiddush Levana and Women
6
What is the reason for women to wear white clothing on YOM KIPPUR?
1
Why remove tallis before maariv on motzei Tisha B'av?
10
Kiddush levana- backwards passuk?