I remember when I visited the Touro Synagogue years ago I vaguely recall hearing about a secret door under the bimah. I don't remember seeing it ,but upon further investigation I found a picture online. However, the reason behind having such a trap door remains somewhat of a mystery. Does anyone have an authoritative account that explains why a synagogue would have such a trap door right beneath the bimah. 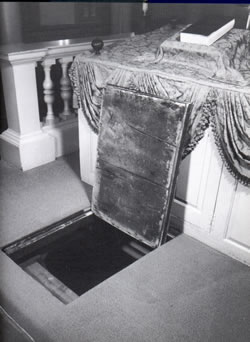 (forgive me if this is off-topic,I am not sure what category this question falls into,I guess it also depends what the purpose of the trap door was for)

This is actually an interesting question. The Department of the Interior's Office of Archeology and Historic Preservation (in its Historic American Buildings Survey) records (in 1972):

The bema, or central reading desk, is surrounded by a balustrade with turned and tapered balusters and a heavy, molded rail. A trap door leading to an escape hatch and tunnel to Barney Street is located in the floor of the bema.

Many note that it was common, even tradition for Spanish and Portuguese Jews to have trap doors and escape routes because of historical fears of the Inquisition.

The origin of the tunnel story is unknown. During the 1958 renovation of the synagogue, despite extensive exploration there was no sign of an underground tunnel passageway, nor of an exit that would be required for such a tunnel. Furthermore, there is no mention of one in any of the early records.

The synagogue, built without a cellar, had a crawl space. It was common practice to provide a trapdoor for access. No one knows whether the present trapdoor is the original or was installed during the extensive renovation to the building in 1828.

Her qualifications are give there by Rabbi Theodore Lewis of the Touro Synagogue, who says:

Esther I. Schwartz, the author of the above letter, conducted extensive research on the synagogue during its restoration in the 1950's, unearthing original architectural plans from the library of Yale University and elsewhere, so in all probability she is factually correct.

However, what we tell our visitors today is that the Jews who settled in Newport did not live in fear but wanted to have the trapdoor serve as a symbol of the freedom of religion they enjoyed in America as contrasted with the persecution their forebears endured in Spain and Portugal during the Inquisition when the Jews were not allowed to worship publicly and very often worshiped in an underground tunnel in case the inquisitors would show up.

In a followup letter to the editor, Fordham University historian Elaine Forman Crane comments on the fact that the Jews who built Touro Synagogue may not have felt all that safe, considering that they were still not given full rights in Rhode Island.

Under these circumstances, it would not have been surprising if the Jewish people felt insecure. It is also not surprising that the plans for Touro Synagogue show no evidence of a tunnel. If, in fact, the Jewish congregation felt threatened enough to construct an escape route, they certainly would not advertise their intentions to the world.

Of interest to note, the Jewish Press (as well as many other places) records that

During the 19th century it served as a hiding site for runaway slaves who were escaping north via the Underground Railroad.

Though others claim that this is unfounded, and in any case, the Jewish community of Newport had mostly dispersed, and the Synagogue was not in use during the time of the Underground Railroad, though its cemetery was.

There doesn't seem to be definitive answer to this, and neither historians nor Synagogue officials really know.

You want to know why a synagogue would have a trap door and why it would be right beneath the bimah. The reason for the trap door might be to escape in case of persecution.

When I lived in Rhode Island, my 5th grade teacher took our class on a field trip to this synagogue. This was about 1952. The tour guide at the time was a member of the synagogue and she told us it was a place to hide Jews in the event of a problem. (And it was also used for the Underground Railway.) So back then, that's what they thought - at least that's what a member told us.

I have never forgotten that story. Our teacher didn't correct her. Our Teacher was Mrs. Winifred Honnen and her husband accompanied us and was well versed in Newport history. I believe he belonged to a Historical Society in Newport.

Not the answer you're looking for? Browse other questions tagged synagogue .