May one dress up as Santa on Purim?

Is there anything wrong with children or adults wearing Santa Claus costumes on Purim? While on Christmas itself it might involve some sort of issur of participating in or celebrating of a non-Jew religious holiday, would doing so on Purim be ok?

...we can examine your question of dressing as a Santa on Purim. There may be a line of reasoning to permit such a thing. We find in the laws of Purim (Shulchan Aruch, Orach Chaim, 696:8) that the Rema writes that some people have a custom for men to dress as women on Purim. Even though this is normally forbidden (as is mentioned explicitly in the Torah), because it is done in the spirit of levity of the holiday, some opinions believe it to be permitted. Perhaps one could say that this applies to the Santa costume – because it is worn in the spirit of Purim fun, and nobody seriously thinks that the person has any real connection or feelings for Santa (or the Christian festival associated with Santa), it could be permitted.

Even though this line of thought might be enough to refrain from rebuking another person who did in fact wear such a costume, one should certainly not rely on this to themselves dress in such a way (or dress their children up as Santa). The Rema quotes Rabbis who forbid forbidden dressup on Purim, and the Mishna Brurah (ibid) quotes major sources who are explicit in their disapproval of such actions. That would rule out using such logic in our case. 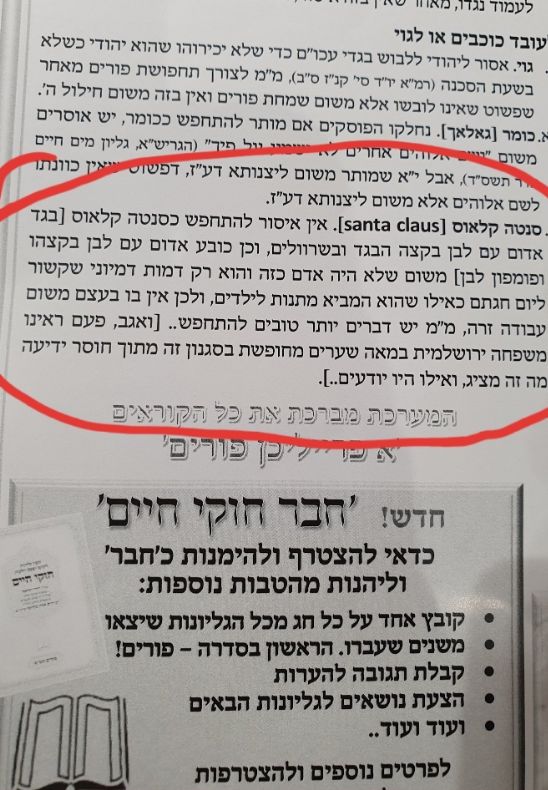 From the sefer of Rabbi Bleier A LOOSE TRANSLATION. There is no issur to dress up as santa claus meaning red clothes etc. because there never existed such a person and it is only an imaginary person who is used for their religious days who brings gifts to their children. Therefore since he does not exist and never did and is only imaginary it is not avoda zoro although there are better things to dress up as. I have seen families in meioh sheorim dressing up as 'santas' for purim, but most likely they have no idea of what this costume represents and if they knew ..... He also says dressing up as a priest is a machlokes.

Not the answer you're looking for? Browse other questions tagged clothing purim .

12
Is cross-dressing permitted on Purim and if so why?

5
Costumes On Purim
14
Moshe's Mask and Purim?
6
Are Sephardic Jews allowed to dress up in costumes on Purim?
2
May one lie about knowing the difference between Haman and Mordechai on Purim?
3
What is the source that one may not dress untidily
4
What is the source for dressing in fancy dress on Purim?
0
May one do exercise on Purim?
4
Can one wear their clothing backwards on Purim?