Explanation of kri u-khtiv vowel for first letter of tetragrammaton

In some situations, such as under a gutteral letter, the vowel quality of a shewa would was less predictable; as such, ḥatef forms of vowels were used to remove ambiguity.

Before the stabilization of the ḥatefim in manuscripts, regular shewas were sometimes used under gutterals. For example, in MS Sassoon 1053 a "simple shewa rather than ḥaṭeph segol is used with aleph (as in אְלֹהִים)" (Yeivin, Introduction to the Tiberian Masorah, §34).

This image shows both shewas under gutterals and ḥatefim in MS Sassoon 1053: 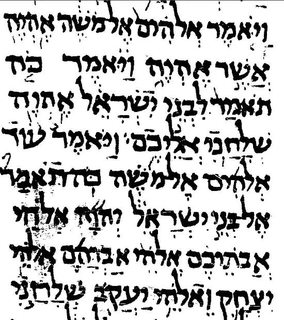 Thus, Khan proposes that the ketiv form יְהוָה "is a vestige of a primitive stage of the development of Tiberian vocalization, in which a shewa rather than a ḥaṭeph sign was written on the ʾalef" (Encyclopedia of Hebrew Language and Linguistics, Ketiv and Qere).

but there can be another reason of the 2 versions

Not the answer you're looking for? Browse other questions tagged tanach shemos-sacred-names .

4
What are the reasons or rules for the different variations in vowels on the Tetragrammaton?
1
Why the masoretes wrote the tetragrammaton this way?

2
Maccabees and God's interaction
13
Why is the Tetragrammaton vowelized in Siddurim and in Sefarim?
0
How do books which have obviously been compiled become part of Tanach?
5
Why does the Chatima of a bracha not have malchut?
11
What are the origins of the תושלב"ע prayer at the end of holy books?
4
What are the reasons or rules for the different variations in vowels on the Tetragrammaton?