If one holds that chadash is assur chutz l'aaretz (or is in Israel), and accidentally cooked a chadash product, would the taam of the chadash that is absorbed in the keilim be a concern, and would you need to kasher the keilim?

Among those who only eat yoshon even in the diaspora, some are only strict about the actual food, while others are strict even about the keilim (vessels and implements).

Source: Rabbi Joseph Herman, who is a good friend of mine, and in whose home I've eaten on numerous occasions. He brought up the idea of keeping yoshon in America to Rabbi Yaakov Kamenetsky. He himself is only strict about the food itself.

I do not have a first-hand source about being in Eretz Yisroel. In any case, and as always, CYLOR.

See Mishna Berura 489:48 that says that even those who are Machmir on Yoshon don't need to be concerned for Bliyos in Keilim unless you are 100% sure that the food is Chodash (which is the case less than 5% of the time*) and the pot is Ben Yomo.

There were many who argued, most famously the Shaagas Aryeh, but the Minhag is like the Mishna Berura

*Speaking from experience as someone who has kept Yoshon since a month after I got married and a regular user of Rabbi Herman's yoshon guide (who actually understands how to use it unlike most people who comment about it) I have almost never came across anything commercially that was Vadai Chodosh. This may be the only exception: 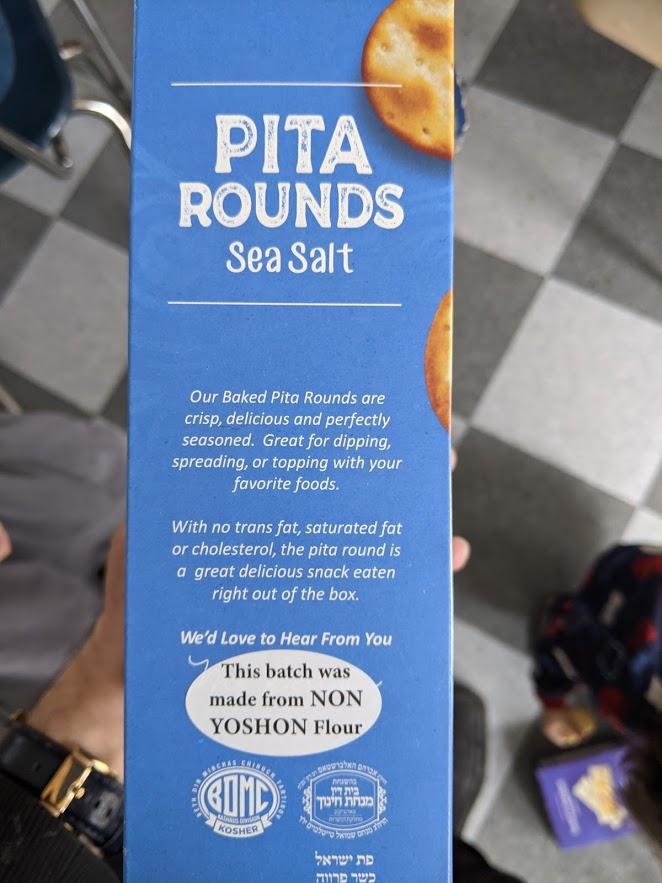 The answer is absolutely yes. If you have a food that is forbidden under the prohibition of Chadash there is no doubt that it absolutely messes up your cooking utensils no less than a piece of pork. No one in history has ever disputed this.

It so happens that for various reasons there have been many suggestions offered for why many foods which would at first glance appear to be forbidden as Chadash should not actually be forbidden as Chadash (famous examples of such suggestions are that the grain was grown by a gentile or grown outside the land of Israel). Even if one doesn't want to rely on any of those suggestions to eat the food, one might be more inclined to rely on them in combination with other lenient factors that often present themselves in cases just involving cooking utensils to allow eating food cooked in a utensil that had previously cooked some arguably Chadash food. Or one might not want to rely on any of those suggestions even then. Or one might only rely on certain of those suggestions depending on the particular arguably Chadash food in question. Or a particular case of cooking in used utensils might not have any associated lenient factors to utilize. As with any ad hoc leniency, every decisor will have different lines depending on the particulars of the case.

There is no categorical leniency for utensils used to cook Chadash any more than had they cooked pork. There are, however, usually more potential factors to combine into an ad hoc leniency depending on the case. Speak to your rabbi to see what factors you should use.

I am careful about not eating chodosh as well as not eating on equipment that is used for chodosh, consistent with the Shaagas Aryeh. This level of carefulness comes from my conviction that it is an issur midoraisa. My practice, in consultation with a rabbi I called from Lakewood, and which is also the OU's/and Aharon Soloveichik's policy is that one can fulfill Shaagas Aryeh simply by waiting for keilim to be eino ben yomo. It is possible to eat out at homes/restaurants that are not themselves shomer yoshon provided I take the following steps. I ask whether any of the ingredients included one of the 5 grains susceptible to Chodosh. If there are, then I can't eat it, because it is possibly chodosh. If not, then I ask whether the pot used to cook it in was eino ben yomo before it last cooked grain that could be chodosh. If they don't know, then perhaps I can assume it was eino ben yomo and eat.

70
Why is it necessary to ask a Rabbi?

4
Why does smashing an earthenware vessel resolve the problem of the absorbed material of a cooked offering which has gone beyond its time limit?
5
Is one allowed to ask another to kasher his items that may get damaged when kashered?
6
How far does Chaticha Naaseh Neveila go?
11
Trustworthiness of "new" dishes
4
Do I need to kasher the grill I used to kasher my liver?
4
How many degrees of separation from food does one have to kasher?
3
Does one need to kasher a pot that is kosher in all aspects except that kosher meat that is not glatt was cooked in it?