This was after the fifth plague: the Epidemic.

Now after the Torah said that all the livestock of Egypt died in the fifth plague, it showed that right before the sixth plague there was still some livestock who survived.

Now I checked the Biblia Stuttgartensia, the word for livestock in 9:6 is "miqneh" and in 9:20-21 is "miqnehu" (his livestock).

Rashi on verse 10 says that

upon man and upon beast: Now if you ask, “From where did they have beasts? Does it not say already, ‘and all the livestock of the Egyptians died’ (above, verse 6) ?” [I will answer that] the decree was leveled only upon those in the field, as it is said: “upon your livestock that is in the field” (above, verse 3), but he who feared the word of the Lord brought all his livestock into the houses, and so it is taught in the Mechilta (Beshallach 1) regarding “He took six hundred chosen chariots” (Exod. 14:7). — [See Rashi on that verse.]

Ramban and Rav Bachya point out several different possibilities exist. First, only the animals owned by the Egyptians died. Those owned by foreigners (or were sold to non-Egyptians before the plague) did not die. Note that it explicitly says that the animals owned by the Jews (including what they had bought before the plague) survived. After the plague, the Egyptians imported from outside their borders or bought animals from the Jews.

One very reliable reference for the exegesis of Exodus is halakhic midrash from the school of Rabbi Akiva also known as the Mekhilta of Rabbi Shimon. (The word “Mekhilta” comes from the Aramaic word מכילתא, which means a collection of rules of interpretation, which is what we might today call Biblical Hermeneutics.) These midrashim first appeared during the Mishnaic Period of the Tannaim and Amoraim (First to the Third Centuries). In tractate Beshallaḥ, Chapter 21, we read the following commentary concerning Exodus 9:6 - Please click on the image below in order to view the source online (i.e., Folio 17a, Line 1 in the middle of the page). 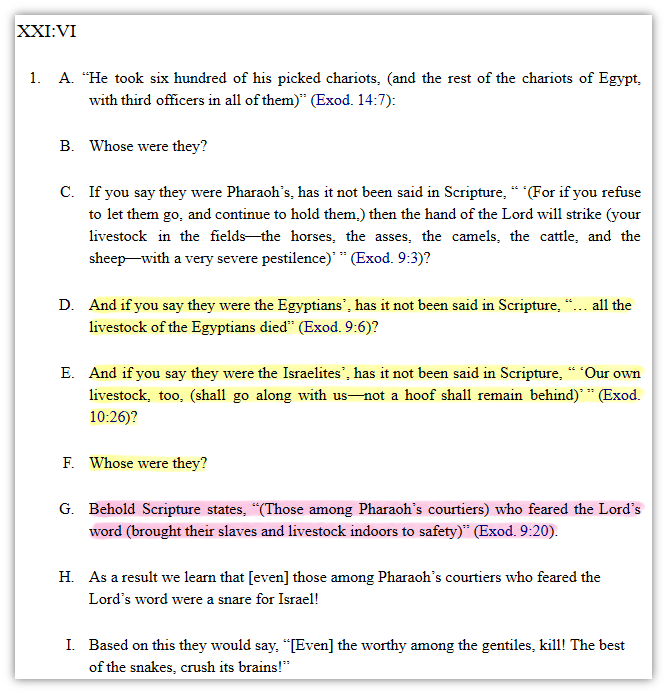 In summary, while Egyptian livestock perished, it was the livestock of Egyptian cohorts employed by the Egyptians that survived. These surviving livestock were later employed to pursue the Jews when they fled Egypt.

Ralbag says that when the posuk reads "all the livestock of Egypt died" that doesn't mean that "all of them" definetely perish, since the word כל does not mean more than the greater part of a whole. He brings several examples for that: As on the plague of the firtsborn, the Mitzrim exclaimed "we are all dead". The word "all" there (כלנו) does not mean "all mitzrim", but some of them. (See also Ibn Ezra on Shemos you quote, he says: רובו, meaning "most of it".

Not the answer you're looking for? Browse other questions tagged parshanut-torah-comment animals commentaries va-eira shemot-exodus .

1
How did the Egyptians who didn't fear Hashem have animals?

10
What's the difference between כשב and כבש?
28
Was Malbim an innovator?
5
Questions about the Beginning of Vayechi
4
Did Hashem command Aharon to strike the water to bring the plague of Blood?
5
Why is every commandment and action in regards to the 10 plagues repeated?
4
Were there specific locusts in reserve for the 8th plague?
3
What did Moshe mean in Shemos 4:10?
1
Slavery, an apparent contradiction?
0
Contradiction about Moshe