Why are some cheeses not kosher?

Why are certain cheeses not kosher and some are kosher?

From the ingredients on the label it contains no non-kosher products or ingredients in it.

There are several Kosher concerns special to cheese that go beyond its ingredient list.

The biggest is the question of "Gevinas Akum" (lit. cheese of a non-Jew). The Mishna says that cheese made by a non-Jew is forbidden, conceptually similar to wine. The exact parameters of this prohibition are debated, with opinions ranging from it is basically not operative (e.g. Rabbeinu Tam, mentioned in the Ramo in Shulchan Aruch to justify those who are lenient) to it applies to any and all forms of cheese (e.g. Aruch HaShulchan).

There are two general categories of cheese that are of Halachic significance. One is hard cheese, which requires rennet or something taking the place of rennet to make it. Then you have soft cheese which is called "acid set" because it is made by lactic acid fermenting in the milk.

The generally accepted practice of Kashrus agencies in America, at least, is to say that cheese that requires rennet - that means it could not be made with the acid set method, whatever the source and kosher status of the rennet used, requires the specific stringencies to avoid Gevinas Akum. The primary one (in terms of cost and therefore availability of Kosher product) is the presence of a supervising Mashgiach who inserts the Rennet or is at least present when it is inserted.

It should be noted that soft cheeses that are exempt from this often include rennet to rush the process, but since it would happen without the rennet, they are lenient.

Besides this, looking at the ingredient panel doesn't tell you about the Kosher status of the rennet or enzymes used (nor do they even list rennet with the name rennet, it can often be called enzyme, as that is what is interesting about rennet), so you could get the impression that it is fine without realizing it. Although animal based rennet is more expensive, it is still sometimes preferred by the manufacturer.

So the ingredients look Kosher, but are not.

Besides this you have intermingling issues. I know of a community where the Rabbi mistakenly certified cheese without realizing that it was immersed in the same salt bath (this is called brined cheese, at it can apply to cheeses that some are claiming are soft as well as hard cheese, but more commonly hard) as the non-Kosher cheese. The psak was that anyone who cooked with the cheese had to Kasher their dishes. (I subsequently spoke to a Rabbi with deep knowledge and experience in the area and he said it is an understandable mistake to make, given how cheese production is set up and presented).

So there is a lot more to the Kashrus of cheese than its ingredients, and the ingredients themselves can be deceptive.

Hard cheeses are under similar strictures as wine. Wine made in normal fashion is inherently kasher, however the Rabbis imposed an extra stringency that wine that was touched by a gentile becomes forbidden. The Rabbis noted that all soft rennet-less cheeses can only be made by milk from animal species that are kasher. However, hard cheeses, cheeses that require rennet (historically part of an animals stomach) were problematic. The extra stringency against hard cheeses is under the category of givenat/gevinas akum.

So the ruling brought down by the Rabbis is that all soft rennet-less cheeses are automatically kasher. This encompasses cream cheese, mozzarella, ricotta, Greek yogurts, labneh, feta etc etc. This is why you will notice that most cream cheeses or other soft similar cheeses all have a hecsher, because kashrut agencies can certify the cheese without having to be present. This is also why you'll see Greek or middle eastern yogurts, even of the cheapest varities, also have hecshers. Heck, even the supermarket by my house has cheap imported Mexican Melting cheeses with hecshers, because the soft cheeses don't require supervision, so it's easy for companies to get hashgacha for all soft cheeses. So in reality there is usually no difference between hecshered or unhecshered soft cheeses, as they are (typically) both equally unsupervised. Even the OU admits this is common practice for hashgacha companies:

Common practice (adopted by many kashrus agencies, based on the rationale in Igros Moshe YD 2 s. 45 and approved by Rav Yosef Eliyohu Henkin) is to follow the opinion that that the gezerah of gevinas akum was only declared on hard cheese, as only hard cheese uses rennet to form into curd and was therefore subject to the prohibition. Soft cheese, such as cream cheese and cottage cheese – also called “acid-set cheese” – does not need rennet to coagulate, as it can acidify and form on its own, and such cheese is therefore not subject to the rule of gevinas akum.

Another person posted here that you can't always "be sure" that the ingredients are kasher. This is sometimes true. However, MANY cheese companies go out of their way to put "non animal kosher rennet" in the ingredients list so that way you know for sure the product is kasher, even without a hecsher. You can rely on such ingredient lists. Here is an example of non hecshered feta that is completely kasher to eat according to Rabbi Yitzchak Abadi, and lists non animal kosher rennet as part of its ingredients: 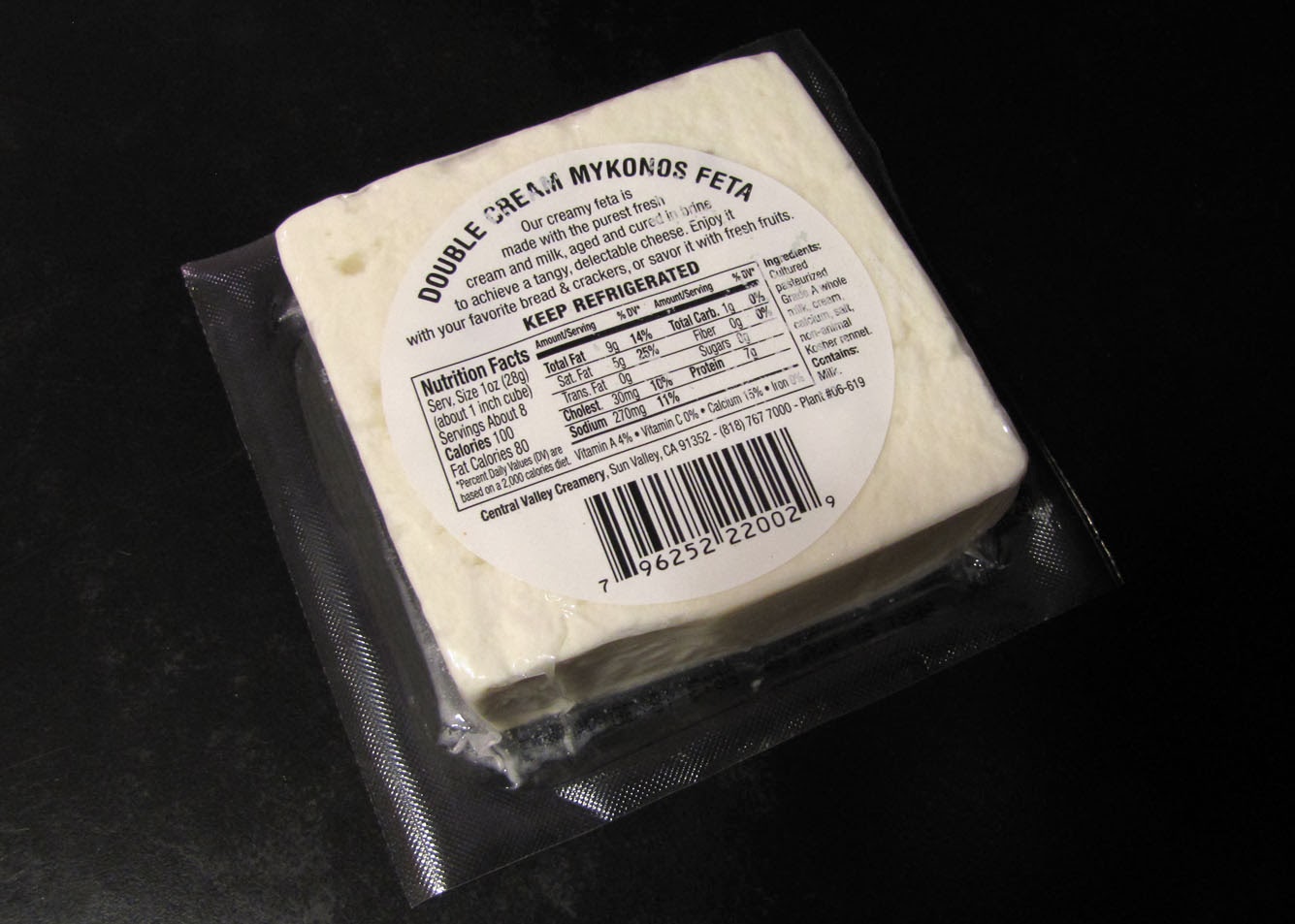 However, hard cheeses require direct supervision by a Jew, as their was concern of rennet coming from non kasher sources being used to make the hard cheese. These types of cheeses are cheddar, permesian, or any cheese that typically appears as a solid block.

You can find more information about this through the very helpful website http://www.kashrut.org The website was brought into being by the renowned posek Rabbi Yitzchak Abadi to help simplify kashrut matters/questions.

For sources regarding the lack of supervision, people have reached out to the OK and OU and the responses they received were that neither the OU nor the OK supervises cream cheese, and i see no reason why this wouldn't apply to other soft cheeses.

Kraft Philadelphia Cream Cheese is "supervised" by the OK and not the OU. The OK has a section on their website which indicates whether or not a Mashgiah is present for the "cheesing". These products as well as several types of Ricotta and Cottages cheeses that are "supervised" by the OK do NOT indicate that a Mashgiah is present for the production.

I asked Rabbi Cohen if he would eat TempTee cream cheese he gave me what at first I considered an acceptable answer. He claimed that he only eats Chalav Yisrael and therefore, no he would not eat the brand even though it is OU. When I then asked him if I took Chalav Yisrael to the TempTee factory and told them to use this milk in a batch of cream cheese, making it the same way and watching it the same way as is presently done, would he eat it? he asked for some time to think about it. After a week I called back for the answer and he told me he hadn't thought about it but that it would be wiser if I shared my concerns with you. I pose the same question to you. If you tell me that the OU doesn't consider cream cheese cheese, then how many of the mashgihim or rabbis working for the OU would eat unsupervised cream cheese? If the majority would not eat it then where is the Union in Orthodox Union?? I have heard many times in my life that the kashrus business is just that... a business, but never fully believed it before. The OU has a chance to prove that it has not become merely a business. As far as I am concerned, if the Rabbis of the OU would not eat cream cheese because of gevinat acum then they have truly transgressed the law of not putting a stumbling block before a blind person!

Not the answer you're looking for? Browse other questions tagged kashrut-kosher food .

10
If all ingredients are kosher, is the entire dish kosher?

12
Kosher Cheese without a posted hechsher
16
Why assume coffee is kosher
10
Does Vegan Certification Have Any Halachic Weight?
10
If all ingredients are kosher, is the entire dish kosher?
3
Is there a halakhic/kashrut reason why some foods are labeled OU and some OU Pareve?
1
Are Uncertified Lotus Biscoff Cookies Kosher
5
Drop-shipping Non Kosher Food Products?
1
Why are some Matzah labeled as not being kosher for Pesach/Passover?