Shemot describes the construction of the tabernacle. I have a question about the engineering

In the description of the construction of the tabernacle in Shemot (Exodus) 26 The JPS translation of Exodus 26:28, it says "and the middle bar in the midst of the boards, which shall pass through from end to end."

Is this bar horizontal, or is it slanted? If it is slanted, then the structure is what a civil engineer would call a truss. Trusses are very strong for their weight. Since the tabernacle is designed to be portable, it seems like a reasonable thing for G-D to do, but the text doesn't say that it is sloped.

My understanding has always been that “the middle bar in the midst of the boards, which shall pass through from end to end” was horizontal as you can see in the picture from here. 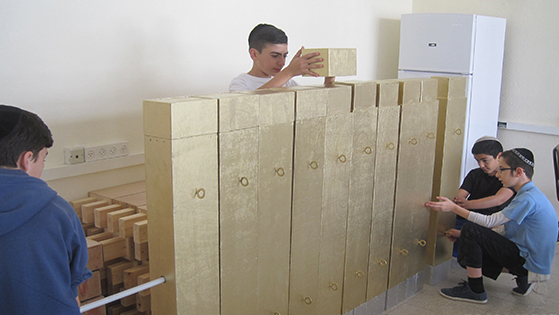 Boys are constructing a model mishkan. The boy on the extreme left of the picture is inserting the middle bar into the boards.

במרכז הקרש - החור המשמש את הבריח התיכון.
In the middle of the board there is a hole which is used for the middle bar.

Before I answer your translation, I'd like to work with two others that I've seen that are a bit easier to understand.

The Sefaria translation is "halfway up the planks," not "in the midst of the planks." According to that translation, "pass through from end to end" would seem to be from one end of the Mishkan to the other, and thus you have no choice but to understand it as horizontal.

Artscroll's translation is "the middle bar inside the planks," as if there was the plank with a support inside and a coating outside, not unlike the way the Aron was built (25:10ff). This sounds more similar to your translation, and it seems to imply that there were beams inside the planks to help keep them sturdy. Thus, they were neither horizontal nor slanted but rather vertical.

If you take the JPS translation at face value to indicate one of the beams, without specifying which one, the question shouldn't be horizontal and diagonal, but rather vertical or diagonal. To this the various commentators to chapters 26 and 27 seem to indicate that they were vertical. (Logically, this makes sense as well. These beams were huge; if they were slanted even the tiniest bit, they would fall over with a big, loud, thud.) Though, this translation doesn't seem to explain what "pass[ing] end to end" means. Thus, I'm going to assume that JPS had in mind what Artscroll said.

Not the answer you're looking for? Browse other questions tagged architecture-design mishkan-tabernacle parashat-teruma .

7
Why are Milochos based on the construction of the Mishkan?
2
Why are consumables eg “oil for lighting” mentioned in Shmos 25 (6) as needed for the construction of the mishkan?
8
Did people who were not priests ever enter the Tabernacle?
7
In building the mishkan, why does the torah sometimes call for זָהָב טָהוֹר and other times just זָהָב?
1
How many people brought sacrifices to the tabernacle at the same time?
1
The encampment around the Tabernacle: What did it look like?