Cherubim & Ark of Cov. description paralleled to (or inspired by) Egyptians?

I'm wondering why the cherubim atop the Ark of the Covenant, as referenced in Exodus 25:20, 1 Kings 8:6, 2 Chronicles 5:7, etc., are explicitly described with outstretched wings? I believe that prophets such as Moses had the true authority of G-d and Moses followed the instructions given regarding the Ark and the Tabernacle. However, the detailed description reminds me of the Egyptian goddesses Nephthys & her much more well known sister, Isis. With their outstretched wings, they served as protective deities. They are featured here Why Does Isis Have Wings? | Isiopolis and here: King Tut's Isis & Nephthys Pectoral, | Egypt! They are prominently attested in the Egyptian archaeological record (the last being one of King Tut's pectorals)!!! Now compare those motifs of Isis & Nephthys with artists' renditions of the cheribum on the Ark (as far as I'm aware, it hasn't been discovered yet... Hehe. Just going off of biblical texts) here: The Ark of the Covenant - YAHWEH's Sword and here: Finding the Ark of the Covenant! Do you guys see how similar they appear? Or is it just me? Do you think there is a connection here? Like an Egyptian influence? After all, the Israelites had been living in and among the Egyptians for awhile... But, But, But... The cherubim are designed in accordance to G-d's will so why would He want to reflect the Ark in a similar fashion to the foreign/despised deities of the nation, who He delivered the Israelites from? (Do you guys see how similar they are or am I imposing it on them)? Or is it simply just a common motif that is likely to crop in many ancient cultures?

Any similarities to Egyptian art forms/expressions? If so, why would G-d allow, rather order, that when he despised the Egyptians' wickedness? And to top it all off, why are they even represented if it's contrary to the commandments? I'm curious what scholars have come up with? At the end of the day, who are we to speculate G-d's reasoning -- He can do whatever He wants. I'm just curious how have scholars addressed these issues and how they have reconciled the seemingly Egyptian parallels?

Judaism fundamentaly differs from Egyptian theological system. Only thing similar here are wings and fact there is two of them. Cherubim and their representation is not contrary to commandments, it was explicitly commanded by God, I think that is why they might appear elsewhere… It is in Shemot 25:18 "and you shall make two golden cherubim; you shall make them of hammered work, from the two ends of the ark cover."

Rabbi Joshua Berman addresses some of the issues that you raise in his book Ani Maamin.

Rabbi Berman brings academic research to support the idea that some language forms, rules and practices found in the Torah were culturally appropriated, some from Egypt. For example (and not relating to the OP's question directly), the term "strong hand and outstretched arm" found in the Torah is a phrase used only regarding the Exodus from Egypt. Rabbi Berman also shows that it is a common term used throughout Egyptian writing when referring to some action carried out by the Pharaoh. Although this cannot be known, the phrase could have been appropriated into the Torah as a direct challenge to the Egyptian leadership who were the most powerful civilization of the time in the region. There is good reason to do this as will be explained.

Specifically referring to the Mishkan, Rabbi Berman says that scholars debate its origin. However, some find stark similarity to the battle encampment of Ramsesses II at the Battle of Kadesh. Here is an Egyptian inscription of the encampment at the battle of Kadesh (at Abu Simbel):

And here is a close-up of the military tent of Ramesses II, see this website:

There appears to be resemblance between the two. The website above suggests that the two winged figures in Ramesses's inner chamber are that of the god Horus (often depicted as a falcon with wings) and was a symbol of kingship. The two winged figures face towards the cartouche of Ramesses II, as his protector. This resembles the cherubim of the ark facing each other.

This motif of the pharaoh being protected from both sides is not unique to this hieroglyphic relief, but was relatively common. For example see this rendering of Ramesses III flanked by the gods Horus and Seth: 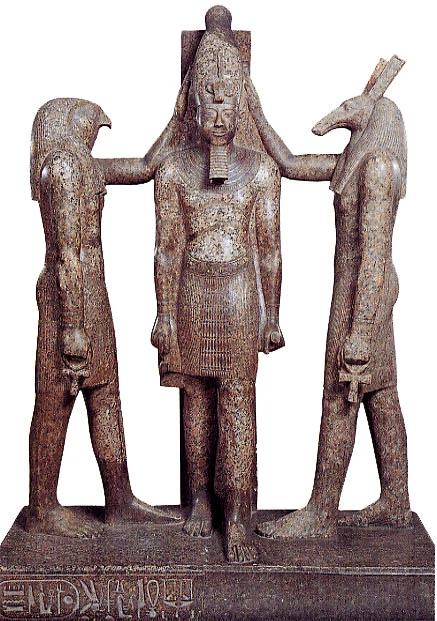 With regards to why the Torah would appropriate this motif (if this is what happened), there are plenty of examples of similarities in practice between Jewish and ancient cultures, see here for example.

I would like to note that this particular connection between the mishkan and the encampment of Ramesses II is a very recent one, I think Rabbi Berman says it was from research in the 1930's, as the discovery and scholarship of Egyptian literature advanced. However, a similar line of thought regarding appropriation of extent religious practices can be found in the Rambam. For example see the Moreh Nevuchim Part 3, 32 where the Rambam writes about why sacrifices were incorporated into the Torah despite it merely being a ritual practice of various religions of the time. Here the Rambam is telling us why it would seem, at face value, strange to incorporate a ritual practice of another civilization, but shows that there is good reason in doing so.

I would really recommend reading the whole passage from this Rambam to get the idea of what he is saying and suggesting. Basically, in order to bring a people towards Godly service of Hashem we cannot, with a single miracle, get them to change; it is a process that must be mediated and has a historical context. The incorporation of sacrifices was a necessary incorporation into the Torah to redirect the people away from idolatry.

The Rambam continues to explain how sacrifices are not the primary objective and yet they are incorporated into the Torah (ibid.):

"As the sacrificial service is not the primary object [of the commandments about sacrifice], whilst supplications, prayers, and similar kinds of worship are nearer to the primary object, and indispensable for obtaining it, a great difference was made in the Law between these two kinds of service."

As I mentioned, this last part about sacrifices does not answer the question of why the Mishkan bears resemblance to the military encampment of Ramesses II or whether it was appropriated. This just goes to show that, according to the Rambam, at least sacrifices were appropriated into the Torah for a higher purpose of leading the people away from idolatry. By extension, it could be that other aspects of the Torah were incorporate from other religions and/or civilisations of the time as part of the broader purpose of turning the people away from idolatry using familiar practices of the time. Since the Rambam didn't know about the Egyptain inscriptions we cannot know how he would react to it. However, this gives us a glimpse into his approach regarding appropriation of extent practices.

Not the answer you're looking for? Browse other questions tagged history avodah-zarah yetziat-mitzrayim ark-aron-kodesh art .

7
"Moshe cried out" - really?
23
Why do we bow down in the direction of the ark?
0
Is there a book or online source that discusses the history of "U.S. / Canadian use" Siddurim?
9
Are Cherubim on top of the ark exception or contradiction?
2
Why were there two Cherubim on the Ark
1
Why would Pharaoh's heart be made כבד by G-D?
3
How is a reference to Egypt comforting when the concern is that the enemy is many?
8
Would suicide be considered acceptable if it was done to prevent yourself being sacrificed to an idol deity?
1
Why were the plagues necessary if God hardened Pharaoh's heart?