Ezekiel 29:19 states the G-d will give Egypt to Nebuchadnezzar II.

Therefore this is what the Sovereign LORD says: I am going to give Egypt to Nebuchadnezzar king of Babylon, and he will carry off its wealth. He will loot and plunder the land as pay for his army.

How is this compatible with the fact that Amasis II the pharaoh of Egypt repelled an attempted Babylonian invasion in 570/569 BCE?

The following quote is from A Companion to Ancient Egypt by Allan B. Lloyd:

Babylonian king embarked on an invasion of Egypt, apparently accompanied by Apries, whom he perhaps sought to restore to the throne as a vassal king. Probably even before he was able to penetrate into the east of the Delta, he was repulsed by Amasis. Apries himself was killed in this engagement, an event which gave his adversary the opportunity of burying him with dignity in Sais as evidence of his desirer for reconciliation.

Babylon defeated Egypt shortly after laying waste to Jerusalem. That is, the Babylonians first routed the Egyptian army at the Battle of Carchemish, and within 35 years, defeated Egypt proper.

Writing in the 1st Century, Josephus had quoted the historian Berossus, who lived some 250 years after the fall of Babylon (and about 250 years before Josephus). In the image below, the blue font is the context, and the red box is the citation in view.

Please click on the image below to view the source document online. 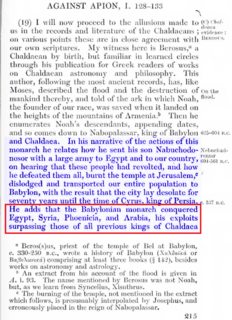 1
Rabbinic sources on (un)fulfillment of prophecy in Ezekiel 29
5
Diaspora of Egypt: has it already happened?

9
Return to Egypt: Allowed?
5
Diaspora of Egypt: has it already happened?
2
How bad was life in Egypt?
4
Famine in Egypt
1
Why did Moshe conquer the land of Og and Sichon?
1
Where in Egypt did the Jews live while they were still slaves in Egypt
4
Locusts don't damage Egypt. Really?
0
Source for non-immorality in Egypt
5
Source for the boundaries of Egypt