I see a machloket sidurim and Tanachim about the Na of Hasem Hatlicha Na in the hallel.

I see in this book Yesod Hanikud Shaar Hadagesh paragraph 28 (כח) a potential explanation but not understand wholly.

I can guess that the reason is because hoshia is usualy mile'el and hatslicha also. Am I Right?

The reason for the dagesh in נא is because of a phenomenon known as deḥiq (aka, apparently, ate meraḥiq). Deḥiq is the name for when a word receives an initial dagesh when:

It appears that siddurim that do not have a dagesh within the nuns of the two נאs are not quoting Tehillim accurately. The verse in Hallel is from Tehillim 118:25.

The words נא in the verse have deḥiqs, because (1) they are preceded by words that end in vowels and (3) conjunctive accents (ṣinnorit): הַצְלִ֘יחָ֥ה , הוֹשִׁ֘יעָ֥ה. Finally, (4) the word נא has initial stress.

Though הַצְלִ֘יחָ֥ה , הוֹשִׁ֘יעָ֥ה have ultimate stress, Yeivin considers thees to be an exceptional case of deḥiq lacking a maqqef (Introduction to the Tiberian Masorah p. 291). There are other exceptional examples of deḥiqs in general, e.g. Jer 48:4, Psalms 17:10.

Note that the function of the deḥiqs is unclear, as is how deḥiq is meant to affect the pronunciation of the text. 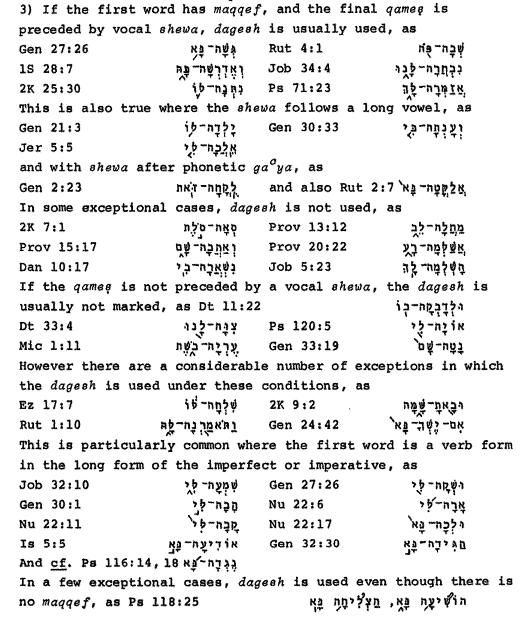 Not the answer you're looking for? Browse other questions tagged grammar-dikduk tehilim-psalms hallel .

8
Stress of הושיעה and הצליחה in Hallel
1
What type of Dagesh is נָּא֙ from (Breishis 38:16)

18
Aleph with a Dagesh
3
Unexpected Dagesh in Reish
8
כּרְעוּתֵהּ (with a dagesh in the כּ) or כרְעוּתֵהּ (without the dagesh) in Kaddish?
2
Articulation of resh with dagesh
2
Dagesh at end of בראת
5
Dagesh after an interrogative hey
2
Dagesh lene in קדּשנו
1
Function of a dagesh