What is the Pesach candelabra?

What are the origins of the tradition to use a round 7-branch candelabra for Passover? Who uses it, when, how, and why?

I am talking about something that looks like this: 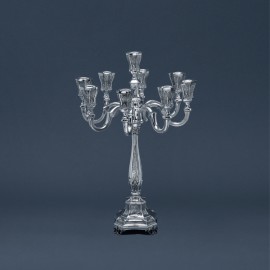 ...Perhaps interestingly related: Source for lighting candles in a circle being OK b'dieved

It is not a Passover custom. You are speaking of the normal Shabbat and Yom Tov candelabra.

There is a custom cited by Mishnah Berurah 263:6 to light seven or ten candles. This could be a reason why silversmiths make seven branched candelabras beside the custom referred to below.

A woman lights candles for her family before Shabbat and Yom Tov. The custom is to add a candle to the original two for each child. That is a woman would light two candles for Shabbat, one for shamor and on for zachor. She would than add an additional candle for each child that she has. Once she is already lighting a certain number of candles for Shabbat, she may not decrease that number (which accounts for the same number on Yom Tov).

One reason can be that if a woman forgets, then she adds an additional candle the following weeks. Once she lights an additional candle, she continues doing so. However,many people separate the two customs since it is not a case of "forgetting" but of being forced not to light (and the husband will light for the household).

That would mean a custom of lighting one (above the basic two) for each additional member of the household.

When visiting someone, the custom is to light two so as not to cause difficulties for the host.

I should note that my wife lights one additional for each child even though she did not miss a shabbos for every child, and one additional one for a Shabbos in which she was ill and fell asleep before Shabbos after I had left for shul.

The five branched candlestick would be for a family with three children, the seven branched for five children, etc.. However, many people get this so as to not have to buy additional candle sticks as each child comes along or are given one as a gift. Others will get the bigger one after the children have arrived and they can afford the expense.

שמירת שבת כהלכתה bring the reason for the common מנהג to add a licht per child in the family.

In times gone by, the new mother would stay in hospital for a number of days following birth, and would generally not be in a position to light שבת licht the first שבת following the birth of a child. Therefore the mother has a din of one who forgot to light, for which the הלכה is that they must light an extra candle every week for the rest of her life!

Shabbos Candles goes into detail about various minhagim and cites the sources. It says that the wide spread minhag of one extra per child is not addressed explicitly in the classical meforshim. That seems to be why it is connected to the addition of a forgotten candle.

While the answerers who preceded me are correct that this seems no different from the regular candelabrum for any other holiday or Shabas, I'll note that Shulchan Aruch (472:2) says:

He should set his table (for the seder on Pesach) with nice receptacles to the extent of his ability.

Hence, you may have seen this candelabrum on the table on Pesach only.

I think that the answer is "simpler" than what sabbahillel mentioned. In the picture, I see a total of 8 "cups".

I know that this may sound strange, but, I have seen some people use an 8 cup menorah rather than the 9 cup one that you commonly see. The 9th cup is for the shamash, and some people don't specifically place this on the menorah at all.

Not the answer you're looking for? Browse other questions tagged minhag passover candle-lighting home-house .

4
Source for lighting candles in a circle being OK b'dieved

12
Hand movements when lighting shabbat candles
4
Chanukiyah height restriction and modern architecture?
10
Sleeping at the Kotel on Tisha B'av
2
Do those who do become religious after a divorce need to cover their hair (women) or wear a tallis (men)?
5
Oil in Shabbos Candles Caught Fire - What to Do?
1
Why are some Matzah labeled as not being kosher for Pesach/Passover?