Similarly, for Onkelos, I am not entirely convinced that אנש is the correct text. If we look at dfus Savyonita, from 1557, we find the following in Onkelos:

I underlined וגבר in red. So too in this Chumash, from Bologna in 1482. 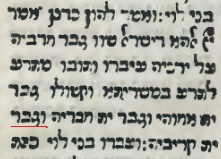 So we really should investigate as best we can manuscripts of Onkelos to determine that the phenomenon is real, before setting out to explain the phenomenon. Tg Yonatan might have been bleed-over from texts of Onkelos, so I wouldn't take it as such strong evidence.

Off the cuff, my inclination is that אנש is used as a translation of person, while גבר is used as a translation of male person. I can see how each would fit well in context. We are saying that each and every person should take X action, so I would expect אנש. But on the other hand, the people involved are warriors, and thus are surely males, so I can understand גבר as a replacement. My inclination is that Onkelos selected only one of these, but some text emended all of these, and someone wrote אנש as a marginal gloss once, to indicate the general divergence, which was then misinterpreted to mean a replacement of only one of these. I cannot prove it, though, and צריך עיון.

It is well known that it is the way of Onkelos not to use the same word twice in the same posuk if it is possible to use a different word (a synonym) for the beautification of the language.

Not the answer you're looking for? Browse other questions tagged words parashat-ki-tisa targumin .

10
Onkelos, Anthropomorphism, and The Exodus
5
Why is the wording "הערים האל" used? (Deut 4:42)
2
Onkelos's various translations of 'ivri.'
4
Trying to understand Targum Onkelos's rendering of סביב
1
What's "פון" doing in the targum to Ex. 3:20?
11
Why are the Kenites translated as Shalmites?
0
Why the Targum translates יצר as ברא?
0
How much is Rabbi J.D. Bleich's exegesis about Targum Onkelos on Deuteronomy 23:18 really shared in the Jewish tradition?
0
Why idolaters are called "own brothers" and "own fellow Jews"?