What is the significance of the Choshen stones assigned to each tribe?

Shemot 28:17-20 discusses the types of stones and their arrangements on the Choshen (breastplate). Each stone had the name of a tribe inscribed in it. Verse 21 mentions that the order of the stones are based according to the order of the birth of the 12 tribes.

In terms of the order, I am uncertain how it worked. Did it go right to left on each row? (when someone is facing the Cohen Gadol) Is there any significance as to why a specific stone was assigned to a specific tribe? Was it something within the color, or the texture or strength of the stone that made it appropriate?

To answer the last part of the question that wasn't addressed yet.

Is there any significance as to why a specific stone was assigned to a specific tribe? Was it something within the color, or the texture or strength of the stone that made it appropriate? 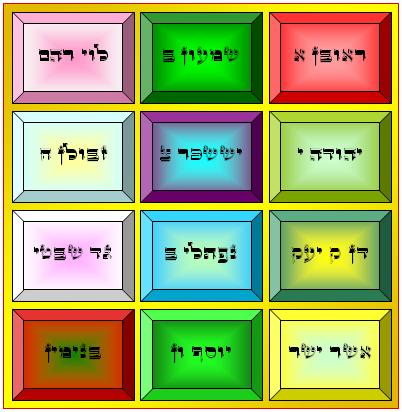 This is Rabbeinu Bechaye's explanation. I didn't add the identities he gives for the stones because I'm not sure what they all are and there are a number of opinions about them. However I did add the descriptions he provides as they relate to the explanation.

Reuven was on the Odem (a red stone) because his face became red with the sin of Bilha when he mixed up the bed of his father and he admitted without embarrassment. And if you grind it and mix it into food and drink, it is very helpful for pregnancy like the duda'im that Reuven found.

Shimon was on the Pitda (some type of green stone) because Zimri ben Salu's face along with all his tribe members who sinned with the daughters of Moav were made green. And Raza"l give 'greenness' as a sign for sin.

Levi was on the Barekes (some type of bright stone) because the Levite tribe shone with Torah. And also Moshe was from the Levite tribe and when he was born, the house was filled with light.

Yehudah was on the Nofech(another green type of stone) because his face was made green in the story with Tamar and he conquered his inclination and admitted without embarrassment. And also because his father suspected him about Yosef.

Yissachar was on the Sapir (a blue stone) because they were great in the wisdom of the Torah and the Luchos were written on Sapir. And we also find by Matan Torah "and under His feet was like sapir brick (Shemos 24:10)." And it is known that the soul of the Torah scholars are bundled in the bundle of life under the Chair of Honor.

Zevulun was on the Yahalom (a white stone) because silver is white and it was a sign of Zevulun's wealth.

Dan was on the Leshem (and it has in it an upside-down face) because the tribe of Dan upturned the bowl(?) and the Leshem became a sign for them in the idol of Michah.

Naftali was on the Shvo and because it secures (lit. connects) the rider to the mount it was given to Naftali which has a meaning of connections.

Gad was on the Akhlamah because just like Akhlamah is common among people and everyone recognizes it so too the tribe of multitudinous and those they killed were recognizable.

Asher was on the Tarshish and its segulah is to aid in digestion of food and even more so for someone who grinds it and mixes it into their food and it becomes thick and fatty as it says "From Asher fatty bread (Bereishis 49:20).

Yosef was on the Shoham and it has the letters of HaSHeM in commemoration of "And HaShem was with Yosef and he was a successful man (ibid 39:2).

Binyamin was on the Yashfe (it is a colorful stone) because his heart was 'changed to many colors' and he thought about the sale of Yosef if he should reveal to his father or not. And even still, he overcame his inclination and held himself back and didn't reveal the matter to his father. And it has two words YeSH PeH and this teaches his greatness that even though he 'had a mouth' and he could have revealed the matter, he remained quiet and didn't.

There are a few opinions about the order of the names on the stones (Rashi says that they were ordered by age, from top-right to bottom-left), while Da'at Zekenim miBa'alei haTosfot think that the order is by their mothers (i.e. first all of Leah's sons, then Bilha, etc.). These two opinions can be found here.

As for the connection of each stone to a specific tribe, see Rabbenu Behaye who lists the specific order in his opinion, and also elaborates about each stone (for example, Reuven got Odem, because his face reddened at the time of his sin with Bilha, and Yosef got Shoham, which is the letters of "השם" and it makes a person find favor with anyone he meets, etc.).

Not the answer you're looking for? Browse other questions tagged parshanut-torah-comment kohen-priest shevatim-12-tribes jewelry tetzaveh .

Like any library, Mi Yodeya offers tons of great information, but does not offer personalized, professional advice, and does not take the place of seeking such advice from your rabbi.
Featured on Meta
Upcoming Events

4
What are the meanings of the different stones for different sons of Yisrael?

7
Did each tribe of Israel serve a specific purpose?
5
Did the half tribe of Menashe have the same conditions as the tribe of Re'uven and Gad?
4
Tribe of Converts
1
What tribe was Jehu from?
3
What tribe were Eldad and Medad from?
8
What was the significance of Pomegranates?