My translation - somewhat "exaggerated" to point the nuances, here:

According to the 19th Century mathematician and Hebraist Dr. William Wickes, the Hebrew Scriptures were written in verse dichotomy, which means that every verse appears in dyad form. In other words, the second half of every verse modifies the first half of every verse (with minor exceptions for example among verses containing genealogies). Wickes calls these verse divisions the logical and syntactical function of dichotomy by cantillation. For example, please click on the image below to enlarge, or view the source online. 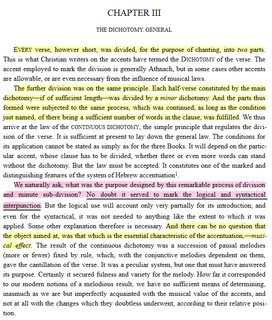 The Malbim says that this is the usual split of "עשה" and "לא תעשה".

And for the "עשה", equivalently, "תודיע להם את הדרך" is parallel to the thoughts and teachings ("דרכי הנפש"), while "המעשה אשר יעשון" is the physical actions of "עשה".

By the way, the Malbim strongly opposes the view alluded to in Joseph's answer (that many verses in the Torah are formed in such a way that the second part is the equivalent, or slightly amplified version, of the first). His principle is:

The usage of diffrent verbs in this posuk seems to be a reflection of Synonymous Parallelism found in the Hebrew Bible in which each element of the second part of the verse or strophe are synonyms/explanations of the idea of its first part.

Not the answer you're looking for? Browse other questions tagged parshanut-torah-comment parashas-yisro .

29
Was Malbim an innovator?

12
Is there a reason or pattern as to when the Torah uses אֵת instead of אֶת?
6
Joseph's interpretation of 7 years of famine - was his prediction false?
4
How do we know when the word ידע means intercourse or just (brain) knowledge?
5
Don't covet? Don't steal? What exactly is חמד in the Aseret Hadibrot?
2
What type of reason was G-d giving Moshe to go to Pharaoh (Shemot 10:1)?
3
Assist with understanding Shada"l regarding grammatic usage in Shemot 18:26
3
Why is there a change in wording between "great" and "hard" in Shemot 18:22 and Shemot 18:26?
1
Is G-d chasing out the Cananite nations or does B'nai Yisra'el have to do this?
0
Please explain Shemot 23:26
0
Why idolaters are called "own brothers" and "own fellow Jews"?