The Mekor Baruch's intructions of making gold from copper

Has anyone ever practically followed the instructions and tried it? Is this documented anywhere?

The text of the Mekor Baruch: 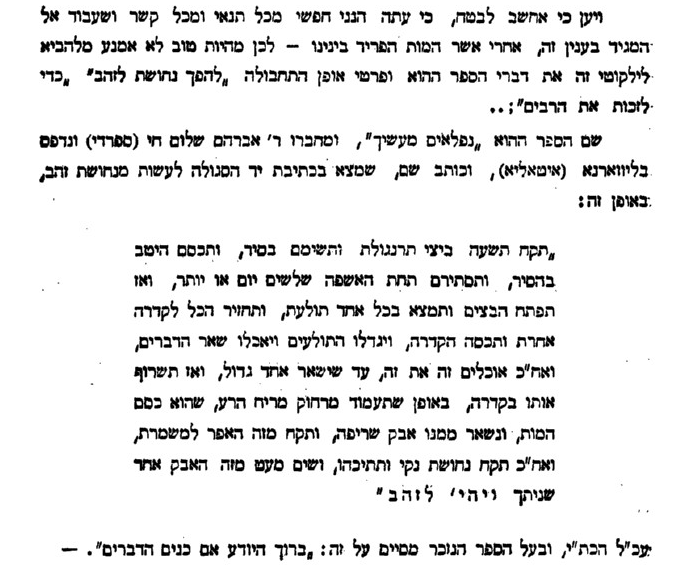 The instructions: Take 9 chicken eggs and place them in a pot, then cover the pot very well, then place it under a garbage heap for 30 days or more, then open each egg up and there will be a worm in each, return everything to another pot and cover it, the worms will then grow and eat everything and then they will begin to eat each other until one big worm remains, then burn this worm in the pot in a manner where you are far away from the bad smell since it is like a deadly poison, afterwards you will be left with ashes and you should take it and store it, after that take pure copper and melt it and place some of the ash on it and then you will have gold.

4
Curse on the Kennedys

7
Source for Dubno Maggid's rebuke of the Vilna Gaon?
2
Why does Nero convert to Judaism in folio 56a in tractate Gittin in the Babylon Talmud?
10
How could there be so little gold in the Mishkan, when it’s clear there’s much more?
3
Source for a story about the Mir Yeshiva on the train to Shanghai?
7
How did the Menorah of pure gold remain standing?
2
“Gold was created only so that it should be used for the Mishkan.” – Source?