Is there a relationship between the Sma“g and the Sma”k?

The works Sefer Mitzvos Gadol and Sefer Mitzvos Katan have very similar names, but I never assumed the connection went far beyond that.

What is the relationship between the two works such that one would rely on being understood in the context of what is said by the other?

The Sma"k (written by Isaac ben Joseph of Corbeil) is an abridged version of the Sma"g (written by Moses ben Jacob of Coucy) including additional agaddic and ethical material. Cited here for instance.

The Sma"k is based on the Sma"g but targets a wider audience, to this effect it includes few sources and focuses on the final decisions. Furthermore it includes discussions of ethics and homiletics.

Last from artscroll introduction to Sefer Hachinuch (in vol 1) 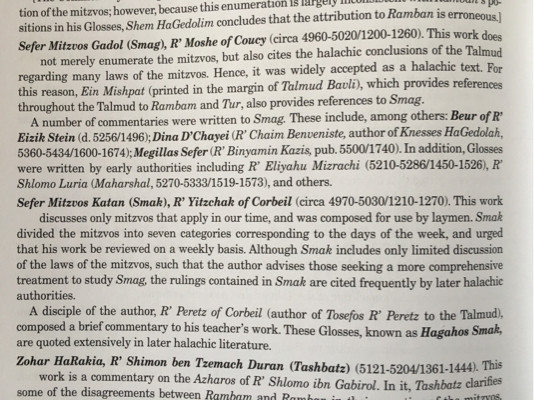 Not the answer you're looking for? Browse other questions tagged jewish-books rishonim .

2
Are there teachings of Rabbenu Moshe HaDarshan found outside of Rashi?
3
Is there a volume in English that explicates the relationship between each haftarah and its parsha?
1
connection between “connection” and “torah”
3
What's the difference between קסת הסופר and מנחת שי?
8
Chronology of writing of the works of the Rema
4
Is there a definitive diagram showing the relationship between Jewish scriptures?
6
Are there any Rishonim buried in England and France
2
Difference Between Imrei Emes and Toras Emes
1
Difference between oz vehadar regular shas and the murchevet edition?