How does the moon cause harm? Tehillim 121:6

The sun shall not smite you by day, nor the moon by night.

I understand that the sun "smiting" you can cause sunburn and heat stroke. But what harm can the moon cause?

Metzudat David commentary says the moisture of the moon can cause sicknesses (kudos to DoubleAA for explaining). What does this mean? AFAIK, the moon has no moisture. Do they mean dew at night? That doesn't come from the moon, and dew is not damaging from what I know.

The verse is not speaking about any harm from the sun (or even the moon), but instead speaks to harm that occurs night and day; in this respect, the psalmist speaks to divine protection 24/7, which encompasses the time period during the time of the sun (daytime) and time of the moon (nighttime).

The Tehellim were sung, and the way this verse was sung in this Psalm had placed a logical pause after the first word according to the system of cantillation. Please click on the image below to enlarge.

At this juncture, the following paragraphs explain why cantillation is important to understand how they relate to the meaning of verses.

The role and meaning of cantillation in Hebrew Scripture

During the 19th Century, the Bible scholar Dr. William Wickes reintroduced and brought new perspectives to light concerning Hebrew cantillation, and how this cantillation was in direct relation to the logical parsing and arrangement of the verses of the Hebrew Bible. That is to say, the cantillation not only provided the musical accompaniment, but set the logical arrangement of Hebrew verse. In this regard, Dr. Wickes writes the following in the introduction to the first volume of his book based on his observations from the Talmud and other rabbinic sources.

Please click this image to enlarge or view the source online 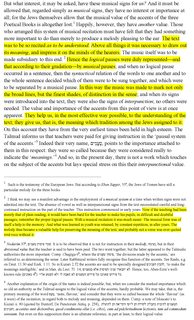 The conclusions of Wickes were affirmed by the late Jewish scholar, Profesor Israel Yeivin, from Hebrew University in Jerusalem. The following source citation (below) comes from Page 172 of his book, Introduction to the Tiberian Masorah (Atlanta: Society of Biblical Literature, 1980). 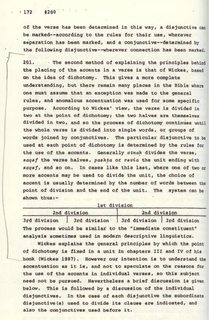 Simplified Version of the Division

Based on the explanations noted in the previous paragraphs, the following is my own rendering of the logical division of this verse in order to better explain the idea. Please note that the first word of the verse (where the main division occurs) is modified by the remainder of the verse, which is also sub-divided. This second part (with the sub-division) becomes the logical complement of the first word.

Therefore it is neither the sun or the moon that is hurting anyone, but instead it appears that harm is the implicit subject. This interpretation also appears in the Targum, but is more explicit.

The Targum Psalms makes it clear that the sun and the moon are not the subjects of the verb, but the subject instead is the harm that occurs during the mornings and nights. Please click on the image below to enlarge.

My own literal word-for-word translation from the Aramaic is as follows:

In conclusion, the Targum Psalms was composed before the 5th Century, according to the Jewish Encyclopedia. Several years later in the 9th and 10th centuries, the Masoretes codified the Masoretic Text, which ascribed cantillation marks to the Scriptures based on the logical division of words and phases. In other words, the prevailing oral tradition understood in the 5th Century again appears in the 9th and 10th Century, when the Masoretes codified the Hebrew Bible.

In summary, from the perspective of these two sources, the interpretation of this verse indicates that the Psalmist proclaimed divine protection 24/7, which encompasses the time period during the time of the sun (daytime) and time of the moon (nighttime).

Many predators are more active during full moons, wolves are the classic example. Lions on the other hand wait until just after a full moon to become more active, as the moon rises later in the evening and thus affords the lion some time after sunset with total darkness. In some areas, though, small mammals actually can see their predators better during a full moon and thus they are more active as well.

For humans, we tend to stay indoors when there is no moon shining yet will happily take a "moonlight stroll" when there is a full moon. With a false sense of security due to the moonlight, we are very likely to trip or otherwise hurt ourselves at night during the full moon. Every Golani trainee soldier knows to expect his commander to surprise them with a night hike during a full moon.

In short, the moon's cycle, or more specifically the amount of light that the moon reflects towards Earth, has profound effect on many creatures. The psalm apparently recognizes that harm is possible during this time, and so hopes for it to not occcur.

How about it means that you receive protection from attackers you can see during the day and from things in the darkened that you cannot see. Meaning spiritually - some battles are evident and others we are not aware of.- Amy

7
Can I say kiddush levana during daylight hours if the moon is visible?
12
The power of saying tehillim
9
Who divided the Tehillim into days?
8
The order of Tehillim
4
When does one recite the verses preceding and following the recitation of Tehillim
6
Praying for the Moon to "fill the defect"
5
What is the significance of a Blood Moon in Judaism?
2
Minhag of saying Tehillim 128 at the chuppah
7
Why is the end of Tehillim 60 the same as the end of Tehillim 108?