Kashrut of a knife without a blade

Disclaimer: I do not understand all of the concepts that this question relies on, nor do i know what they're called and how to look it up.

At home, we're always told to use a spoon and not a knife in things like chummus and mayonnaise, so that it doesn't become milchig/fleishig. My understanding is that there's something special about a knife that can transfer kashrut status. (Maybe דוחקא דסכינא, Star-K's term.)

What about a knife without an actual blade? We have these spreaders that are basically knives without a blade. They're useful for cream cheese, butter, and the like. Since they are able to "cut" these soft things, and look like a knife, do the same halachot apply? (Of course, a spoon can also "cut" through soft spreads.) 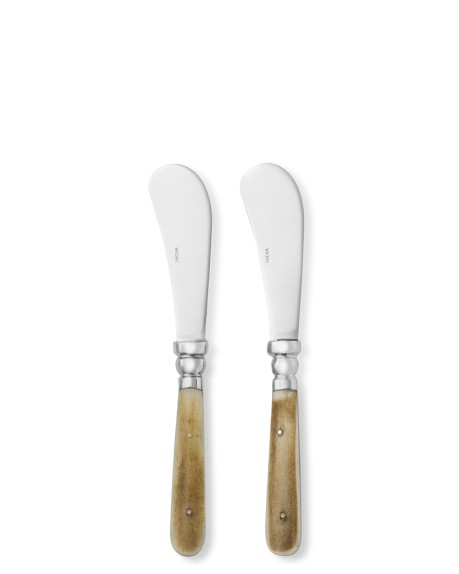 I suppose the question boils down to how sharp must a knife be to be able to change the status of things it touches.

The issue you are describing (duchka desakina) is one of a knife cutting hot food (davar harif, e.g., onions) and transferring taste to it. Therefore a meat knife would transfer meat taste to an onion it has cut. Whether the knife has an "edgy blade" or not, it is the pressure applied to the food which transfers taste.

A cold taste transfer may occur with any utensil that applies concentrated pressure, not just a knife as in our previous example. For instance, if the prongs of a milchig fork are inserted into a spicy pickle, the pickle would then be considered dairy and could not be added to a meat sandwich.

In the case of a butter knife, that is not used for davar harif, there is no such issue. So what matters is more the use of the knife than the type of blade.

I think the reason your family doesn't want you to use a knife with humus and mayo is that there might be actual pieces of meat on it which would then be deposited in the humus/mayo, and could be carried away to another dish by someone else. A spoon doesn't have this issue as one normally doesn't eat meat with it. But having a "humus knife" would achieve the same purpose.

I hope I correctly understood your question and that this is helpful. Here is a good summary of the issues of duchka desakina and davar harif. Finally, I checked all the above with R Yonathan Jessurun who concurs.

Not the answer you're looking for? Browse other questions tagged halacha kashrut-kosher food meat-and-milk .

5
Davar Charif for onion powder and garlic powder
4
Does jam have the halacha of duchka d'sakina?

0
Kashrut: Meat and dairy
5
Kashrut of rennet for cheese & Difference between rennet and gelatin
1
Can you eat cheese with bread-that-was-cut-with-a-meat knife?
7
Kashrut of Chocolate
4
Cold smoking and kashrut
1
Can a דבר חריף transfer בליעות into a כלי without heat?
3
Does one have to wait six hour after eating a sharp object cut with a meat knife?