In Genesis 42, Yosef's brothers, except Binyamin, come to him in Egypt. They don't recognize him, but he recognizes them — and accuses them of spying, and jails them. Then, in verses 18–20:

Yosef said to them on the third day: "Do this and live; I am god-fearing. If you are honest, your one brother will be stuck in your jail, and [the rest of] you go bring the food for the hunger of your houses and bring your little brother to me: your words will be verified, and you will not die." They did so.

they had no choice, they could not do otherwise

According to this article ויעשו כן does not mean 'to make an action', but to agree with something. The Netziv to bereishis 42:20 says that they prepared themselves to choose one of them, but Yosef took from them Shimon, and they had to accept that. R. Abraham ben HaRamban in his peirush also says something similar "they agreed" (forcibly, because they had no way to do otherwise).

In this regard, the 19th Century Hebraist and scholar, Dr. Samuel Driver (1892) wrote the following concerning exceptions to the “consecutive-waw,” and he cites this specific verse as one example.

Please click to enlarge the image, or view the source citation online. 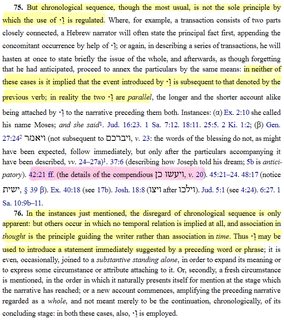 In other words, the phrase “and they did so,” should be translated, “thus they were going to do.”

In conclusion, they were going to get Binyamin so that their words would be verified, and thus they were not going to die -- all the verbs here are in the imperfect (nothing happened or was completed) including the last verb of the verse with the consecutive-waw operating in parallel and modifying what precedes, but without reference to chronological sequence.

In summary, the verse simply expresses the unrealized intentions of all parties concerned.

Driver, Samuel R. (1892). A Treatise on the Use of the Tenses in Hebrew and Some Other Syntactical Questions. Oxford: Oxford University Press, 81-82.

HaRav Eliyahu Mansour SheLIT"A says in the name of HaRav Shim'on Schwab (starting at ~41:00) that "waya'asu khen" indicates that the brothers took heed of Yosef's introspective and upright nature.

HaRav Mansour explains that Yosef originally committed to jailing all but one of the brothers (Bereshit 42:16). Nevertheless, he reconsidered this after a three-day period; because, he was a G-d-fearing man (ibid. 42:18).

The brothers, explains the Rabbi, seeing how who they thought was an idolatrous Egyptian was introspective and upright, decided to do the same (i.e. reconsider their selling of Yosef).

HaRav Mansour points out that this is another example among many in these parashiyot of Yosef positively influencing others by being a good example.

Not the answer you're looking for? Browse other questions tagged parshanut-torah-comment miketz .

15
Why did Yosef's brothers speak freely in the presence of the interpreter?
5
Understanding Rashi's resolution of an ambiguity in Parashat Vayigash
2
Magicians' Inability to Interpet Pharaoh's Dreams
7
How long was Shimon in prison?
2
Didn't Joseph's brothers volunteer information about their family?
1
Joseph and imprisoning his brothers - Is he changing his mind?
3
Was Re'uven confessing along with the rest of his brothers regarding what happend to Joseph?
5
How does bringing Binyamin to Egypt prove that the brothers are not spies?
1
Were the brothers responsible for having Yosef come to Egypt?