Has any rav / gadol answered Maharal's question on why we pray?

I located this in beurei hatefilah

And there are those who ask about tefila: if a person is worthy that G-d should grant him what he is requesting in his tefila, then why would not G-d grant this person’s request even without tefila and if he is not worthy, then even if he were to pray and make his request, will G-d really grant his request simply because this man prayed. And they asked further: Why do we have to pray by mouthing words, is it not so that G-d knows all our thoughts and should it not be enough that we think those thoughts?

These are great questions, and I can't quite begin to answer any of them, myself. Has anyone rav or gadol answered any of them?

In answer to your last question: Rav Shamshon Raphael Hirsch, in his commentary on Bereishis parshas VaYera chapter 20 verse 7, poses a question, "How could Chazal have expected millions of people, 3 times a day, to all, in unison, to beseech haShem for 12 things (the middle section of the Amidah) all at once at the same time of day, 3 times a day!" He contends rather, that Chazal's intention of Tefillos was not to allow the inner thoughts to be expressed. Rather, their intention was to encourage us to internalize certain eternal truths: He explains the etymology of the word "l'hisPaLeL" is related to "PaLeL" pelilim, judgments. In the reflexive form, it would mean "to cause oneself to be able to make judgments" about haShem.

And so, Chazal decided that certain things need to be repeated once a year, or three times per year or every Shabbos, and some should be repeated even 3 times a day. After we have internalized that haShem is Chonein haDaas, Goel Yisrael, Rofey Cholim, etc, by Tefillah, then we will be aware whenever we need to throughout the day that we are able to do "Bakashah" to beseech His help.

We see a similar idea, when discussing minimal requirements of Kavana(concentration), the Tur puts an emphasis on the blessing-ending of each bracha, which is a statement of fact ["Blessed are You, HaShem, the One Who blesses the years."] as opposed to the body of the bracha, which is worded like a public request ["Bless us, haShem, this year..."].

In other words, he emphasizes the internalizing part of Tefillah over the Requesting side of davening.

People are inherently dialectic. We are complex beings that could look at the world different ways. And sometimes those ways give what seem to be conflicting answers, and yet each answer is true. For example, the impersonal philosopher's G-d, the view of G-d we are working from when we discuss Infinity, Perfection, Total Unity, etc... Then there is the very Personal G-d we find in Tanakh, Who describes Himself as angry, feeling regret, etc... And even though we know they are idioms, metaphorically used, this is still a call to relate to Hashem as a Him, not as the unfathomable, all-too-beyond-us, Infinite (Ein Sof).

Rav JB Soloveitchik gives an understanding that dovetails well with R' Hirsch's. (See R Yisroel Meir Vogel's answer.) He explains that the essence of tefillah is to change the self, also by noting the "hitpa'el", reflexive, conjugation for "hispalel".

What was best for the pre-prayer me may not be the same as for the post-prayer me, and therefore prayer could change the outcome.

However, exploring how requests might work despite Hashem always doing what's best for everyone involved either way is different than exploring why we daven and what we're thinking about when we make those requests.

The question of why daven is framed in terms of the Philosophical G-d -- expecting results doesn't fit that way of viewing the Divine.

How to daven, however, is specifically about the Personal G-d. With whom I can have a complex relationship that could be likened to that from (1) lover to Beloved -- Shir haShirim style, (2) parent to Father, or (3) subject to King. As the poet put it, "יְדִיד נֶפֶשׁ אָב הָרַחֲמָן, מְשֹׁךְ עַבְדָּךְ אֶל רְצוֹנָךְ -- Beloved of the soul, (2) empathetic Father, (3) draw Your servant toward Your Will..."

(1) Beloved: I have little to say about praying to G-d as Beloved. Not because there is nothing to be said, but because I can only write about what I know. At my stage of spiritual development, relating to "Avinu Malkeinu -- Our Father, our King" is challenge enough.

(2) Parent: When I am having a hard time, I talk to my parents. Not because I think they can necessarily help, but because turning to one's support system in time of need is a natural part of a relationship.

Turning to Hashem is an end in itself, not a means to get what I want. (This last point is a major theme in R' Soloveitchik's writings on prayer.) It I happen to thereby be changed in a way that does mean that whatever kept me from getting what I wanted is no longer true, great. But that's a side effect, not the point.

(3) King: Well, as a 21st cent American, the notion of King doesn't quite speak to me viscerally either. But I have worked in a large corporation, and dealt with a CEO whose decisions impact 10s of thousands, something that involves a little fear / awe of his power over my fate/ so I modernized the imagery to that.

The CEO's assistant provides a desired itinerary for the meeting, but it's up to me to provide the specific substance. But Hashem and I are the active partners in BMBW LLP (Better Me, Better World), and we both want the same thing -- more good in the world in general, and in my corner of it in particular. Therefore, when I ask for health, it is more "wouldn't it be great if You could", and not "why haven't you yet, please..." Back in the work metaphor, "the employees and customers still need that widget, any chance we can provide it yet"?

And like image of Hashem-as-Father, who knows, He might decide ... "Okay, now that you spent enough time reminding yourself that you need Me to get it, giving it to you won't inflate your ego,won't lead you to take it for granted, it would further motivate you to use it as it needs to be used, or something else." But even if not, my job is the meeting with the CEO and to spend time discussing our joint concern.

Chassam Sofer in his drashos chelk 3 p. 52 says praying is a chok, a mitzvah we can't understand, precisely for some of the reasons you mentioned in the name of the Maharal. He says:

logically it is not proper to request anything from Hashem and to bother Him saying 'give give!' as if Hashem doesn't know our needs and isn't watching out for our best and somehow we know better than Him. Also if He believes something proper that we think improper, to what avail are our prayers to change His mind? ... Rather Hashem commanded us to pray before Him and He desires our prayers... as it is written 'and to serve Him with all your heart', what is service of the heart? Prayers (beginning of Taanis). And He established before us to say 'gaze down from your seat of holiness, from the heavens and bless your nation', and it's written 'Like Hashem our God whenever we call out to Him'... We find that this commandment is like the chukim who's reasons are not known except to the Engraver Himself.... 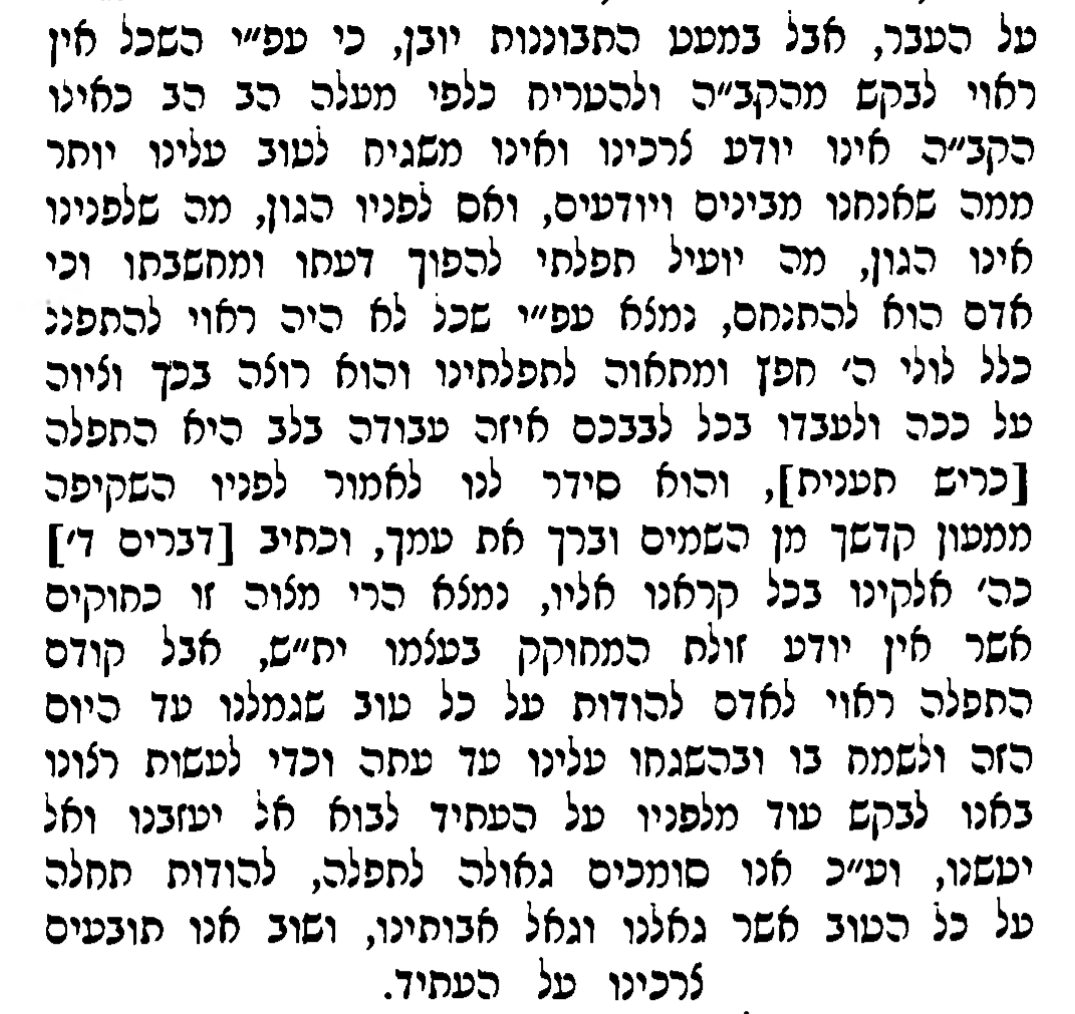 Not the answer you're looking for? Browse other questions tagged tefilla hashkafah-philosophy maharal .

7
Losing concentration in the middle of the first blessing of Shemoneh Esrei
3
Could G-d change His mind about the future of humanity?
2
Not saying v'sain bracha
5
Why did standing on one's feet become the posture for prayer?
7
Was R. Shimon Bar Yochai not part of “R. Shimon Bar Yochai and his companions”?